After various delays, the time has come to get some heat into the house, and as there have been a few on BH that have gone down the route of Willis, thought I would give it a go as well. Hopefully others will find the blog entry also.

Not looking to cater for worst case low temps as at these times will just plug in some extra heaters:

I originally ordered 2x 12Kw heat batteries for DHW and UFH. Total reliance on the PV in summer and then off-peak grid in the winter. An all electric approach initially without ASHP. Not keen to spend £8-10k on an MCS installed heat pump to get back an estimated / possible £8-10k. Installers seem very vague on the RHI returns and if I have read correctly, I will have to be metered in order to qualify in any case (as have not lived in the property previously). Since the house will be far above buildreg stds (but below PH level), I simply won't be using the amount of expected input that the installers calculate - hence I won't be getting back the cost of the ASHP supply and fit install. So most likely won't go down the MCS route, and if I were to install an ASHP, it would be a cheapy from fleabay.

Having excluded using an ASHP, I learnt that Sunamp were testing various units late 2019. But typically with Sunamp, after continued confusion on their part as to what ASHPs they may have tested/not tested/will be testing soon, I've made the decision that I can't want any longer on their input. So for now I will leave the ASHP option until later on and perhaps consider a propane unit (e.g. Vaillant ) when they come online on a non-RHI basis if I can get a decent install cost.

So therefore looking to heat the UFH with 2x 3Kw willis heaters in order to progress with the internal house work. Thought I'd add some info on here as a lot of people like myself aren't familiar what they are. They originated out of Ireland and still much in use over there. They're essentially external immersion coils and instead of sitting inside a tank are simple external electric units - AKA "Willis jacket", "standard sleeved immersion heater"," inline electric heater". Googling should get you something like this:

I have tried to get plumbers interested in rigging this up, but they're either not interested or have told me it's not possible/don;t know what a willis heater is. I've managed to plumb in all the Hep2o in the house, so hopefully this won't be too much of a bodge.

@TerryE has kindly discussed his set up which is pretty impressive with his DS18B20s set into the walls etc. I'm no programmer and my javscript is mainly simple web stuff and wanting to get heat into the place ASAP, I just want a KISS approach for now. Perhaps later I will think about having some of it programmed using Terry's Node Red option which makes for interesting possibilities. Get a feel for Terry's approach here:

But as I've said, I'm after a bog standard dummies approach to this - seriously KISS:

So rather than wiring up room thermostats to the wiring centre, I will for now simply use the Willis inbuilt thermostat and set that to gradual increasing temps from 10oC up to a max of 25oC. A gradual heat increase seems safer in my mind. My only concern is if the Willis thermostat fails and carries on beyond 25oC - up to max temp. Obviously I will have the manifold mixing/blending valve that should restrict temp flow into the UFH also, but is there a further failsafe to consider?

Eventual Sunamp units (for DHW) will be located on left of manifold so having to locate Willis heaters to right  and expansion vessel top right: 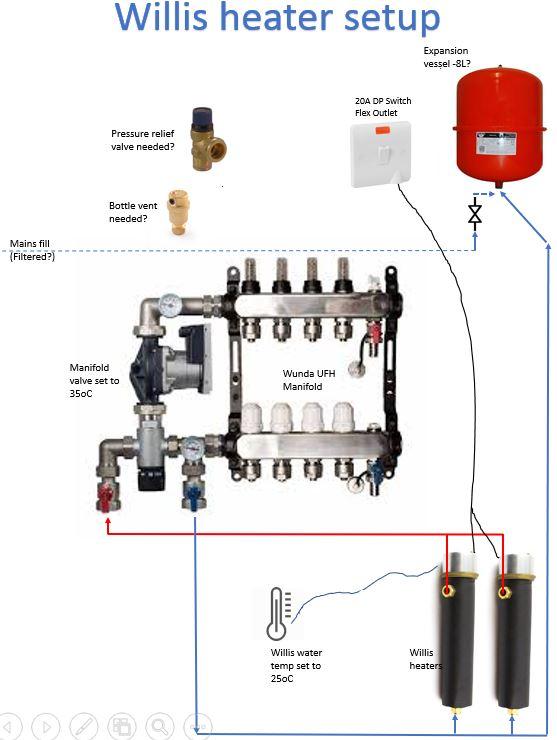 FYI: The immersions need to be turned the other way (so colder water enters the side)

Will get an electrician to wire it all in for me!

Be grateful for comments, suggestions and any answers to above questions!

FYI: I'm no way the first person to install a Willis, so here's a list of other users on BH that have gone the Willis way and will know more than I do: 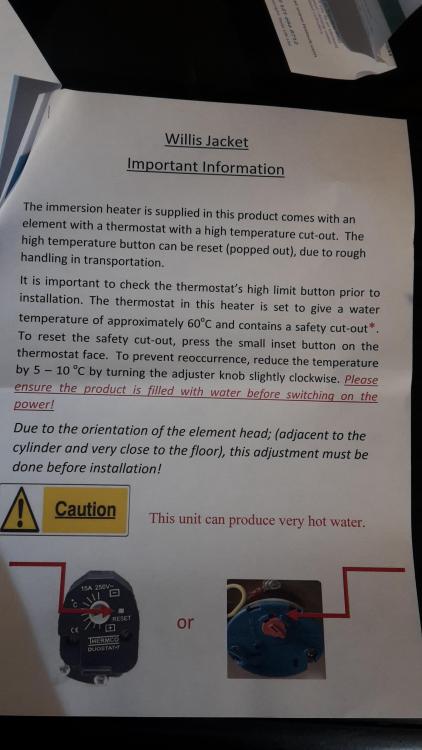