Yesterday was air tightness test day and MBC's final day on site getting everything prepped for the final test and then finishing off a few details.  For those not so familiar with this kind of thing, a few details of the process follow.

Our house isn't a passive house as it hasn't been designed with that in mind - it was the design first and then build to passive standards, so no accreditation or anything like that.  That said, I wanted a low energy house and hence the choice of the passive system offered by MBC.  Part of this system is that as well as the building and foundation being highly insulated, it also leaks very little air, as this is one of the major sources of heat loss in buildings and houses.  The leakiness of a house is measured in terms of the number of times the volume of air contained by the building passes out of all the various gaps in one hour.  As mentioned on this forum elsewhere, a modern well-built house without any special air tight measures would probably change its volume of air between 3 and 5 times per hour.  The final part of MBC's construction method is to tape over anywhere there is likely to be a gap and make the building as air tight as possible; the target is to have 0.6 or less air changes per hour.

One exterior door into the house is chosen as the point of measurement and this is where all the kit goes.  Note that the air tight test is testing the quality of MBC's work and whilst it will highlight gaps elsewhere, it's not MBC's remit to correct leaks caused by others, only themselves.  The point of measurement for my house is the door between the garage and the utility room, where the FD30 rated door was recently installed.  The door is sealed up with a membrane that's supported and held in place by an adjustable frame: 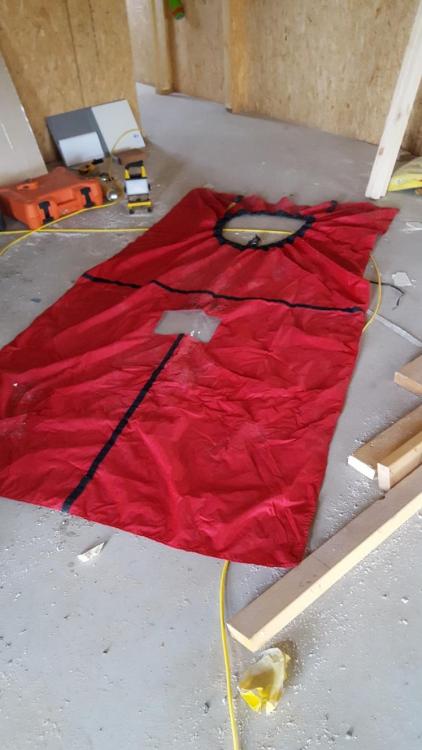 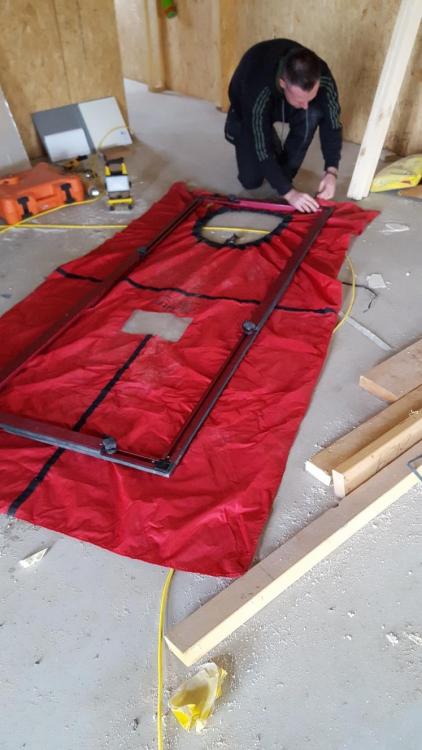 The hands are those of Steve, of Melin Consultants, who carry out most of MBC's air tests.  This is the frame/shield being put in place in the doorway.  I really did try and get a photo without builder's/air tester's bum, but to no avail.  Those with delicate sensibilities should look away now and skip the next photo. 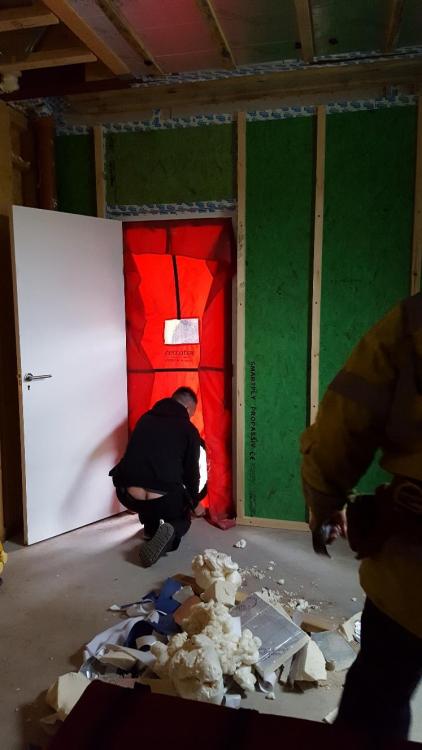 After the frame, the fan is put into the hole in the shield, drawn tight and any gaps between the frame and door frame are temporarily sealed up. 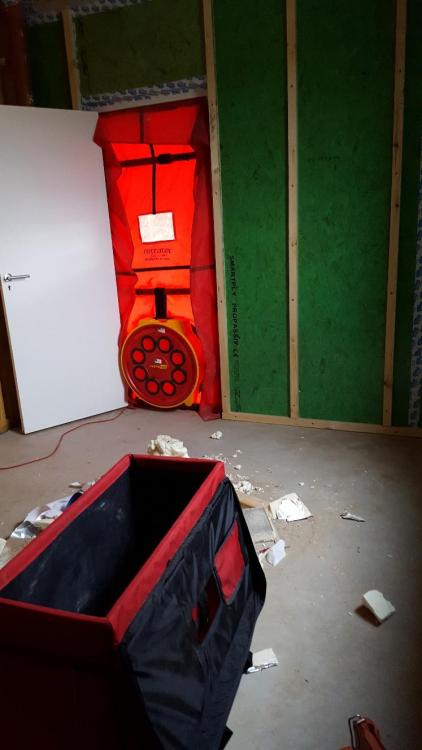 The rate of air flow into and out of the building is altered by both the speed of the fan and the number of vents that are opened up on the fan.  The building is de-pressurised first, then re-pressurised and the readings taken.  Because of environmental factors such as wind, this is done 10 times to get a data set and the average is taken for the final result.  When this test was done yesterday, it was a windy day with the wind coming from the north east, the direction that the garage door faces.

As the test progressed, it became clear that the house is well sealed and so it needed a smaller fan.  The red shield was swapped over and the smaller fan put in place. 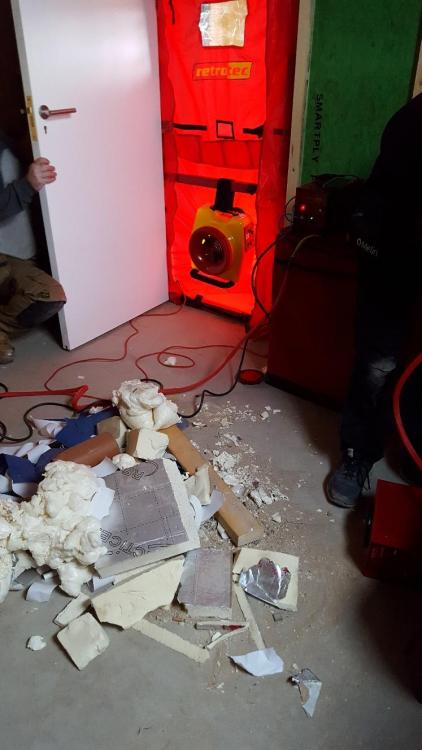 The rest of the readings were taken and we got our final reading.  Darren and his MBC crew aced it - with a target of 0.6 ac/h it came in at 0.25.  Brilliant.  Darren is a calm chap under all sorts of pressures but the air test was about the only time I've seen him display (slight) signs of nerves.  He was equally understated in his satisfaction with the result even though it turns out that this is one of the lowest numbers they've had in 7 years.  Well done, Darren and crew.

If you're wondering what all that foam is doing on the floor, that's left over from work on the foul wastes over the weekend and foaming them in before putting air tight tape around them to make sure it wasn't detrimental to the air test result.

We have a few very minor leaks, mostly gaps between the panels in the windows that have several sections.  No surprise and these are due to be siliconed once we've finished most of the pretty stuff.  There is also a bit of air flow through the keyholes but I've been advised that a good coating of vaseline on the key and in and out of the lock a few times should seal it up well enough.  I daresay that would seal most things.  The gaps were temporarily sealed up with a bit of low tack plastic for the air test, so the result assumes this has been done.

All the battens are in now and the downstairs was finished off yesterday, and concrete was put into the remaining recess that had been formed for the lift and slide doors to get a level threshold. 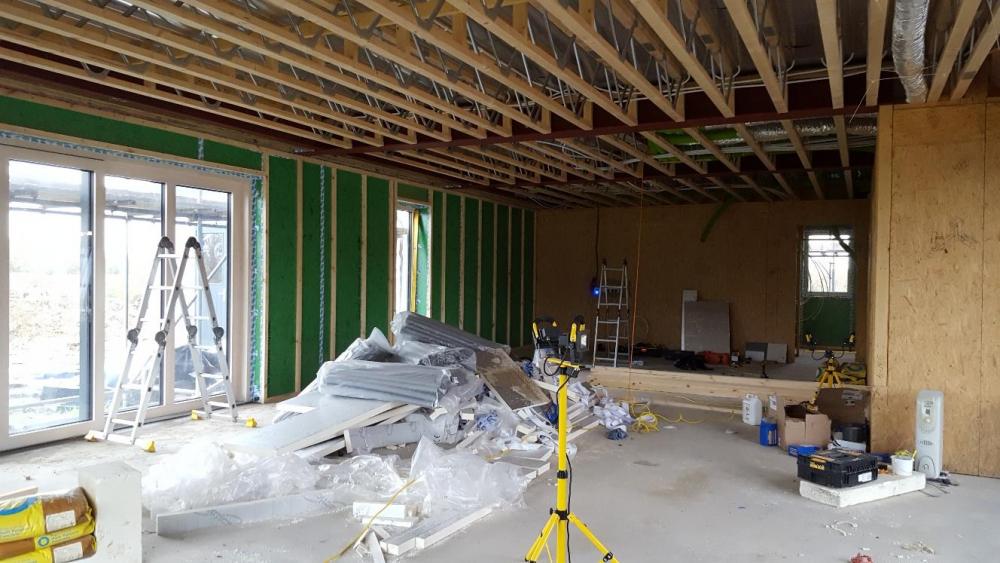 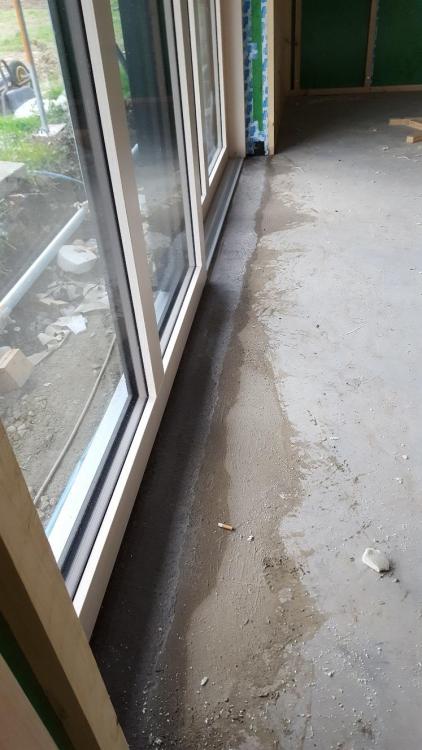 I am, of course, delighted with the air tight result and really pleased for MBC as well, as they have worked really hard and whenever there has been a problem, come up with solutions.  I know that others have had varied experiences but for my own, I have found MBC to be a pleasure to work with right from the start.  At the design stage, David worked his socks off liaising with my architect to get all the details right and to work out how to build the design using their system, and this has been the case with any third parties I've asked them to speak with directly.  The communication from Trish has been great - I've always know what was going to happen and when and been kept informed when timings have had to change.  The guys on the ground have worked like machines; I'm astonished at how hard they work, to be frank, and throughout the whole time I've never heard any rows or arguments.  That's not to say that there haven't been any, but if there have, they didn't take place in front of me.  For me, this has been a really good experience.

What next?  There's still plenty to do but the next main contractor is largely doing all of the internal systems, plumbing and wiring (note - I'm no longer giving details of this as I can't recommend due to unfinished work).  The MVHR ducting and manifolds have been worked on but will kick off in earnest on 3rd December once the cellulose has been blown in upstairs.  The cellulose is arriving on Friday 30th, along with Gordon, who will put it into the walls and ceiling.  All 520 bags of it!  Before then, my Ryterna garage door is due to be installed next week so I'll report back on that.  That's being supplied and installed by Joe from Dorset Garage Doors Ltd, just up the road from me in Lydlinch.

There's a lot of work to be done outside, too, but I'll be thinking through that today and get my plan of action together.  Whatever else happens, some gentle heat will be put into the slab this week, using a couple of Willis heaters.  It's getting pretty chilly on site now and it will be nice to get the house drying out properly and check that side of things is working properly.

A good week and, hopefully, more to come. 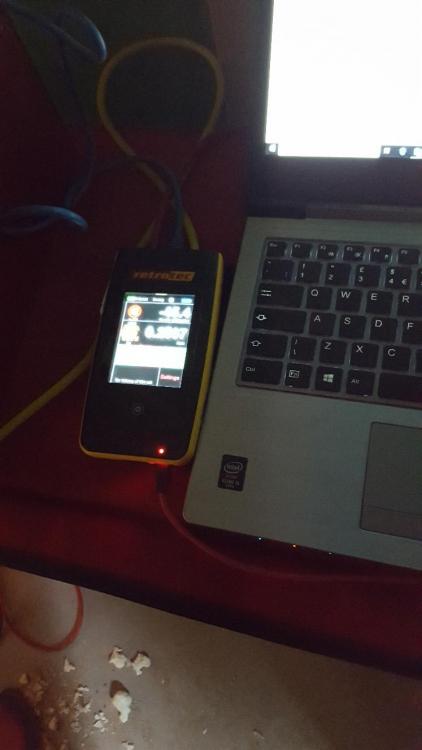 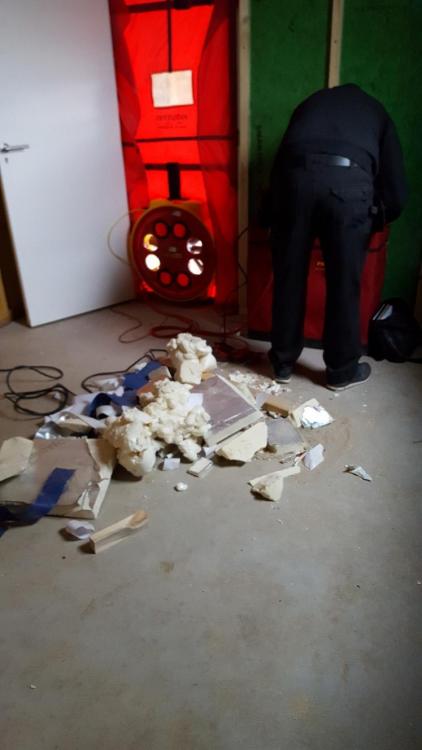 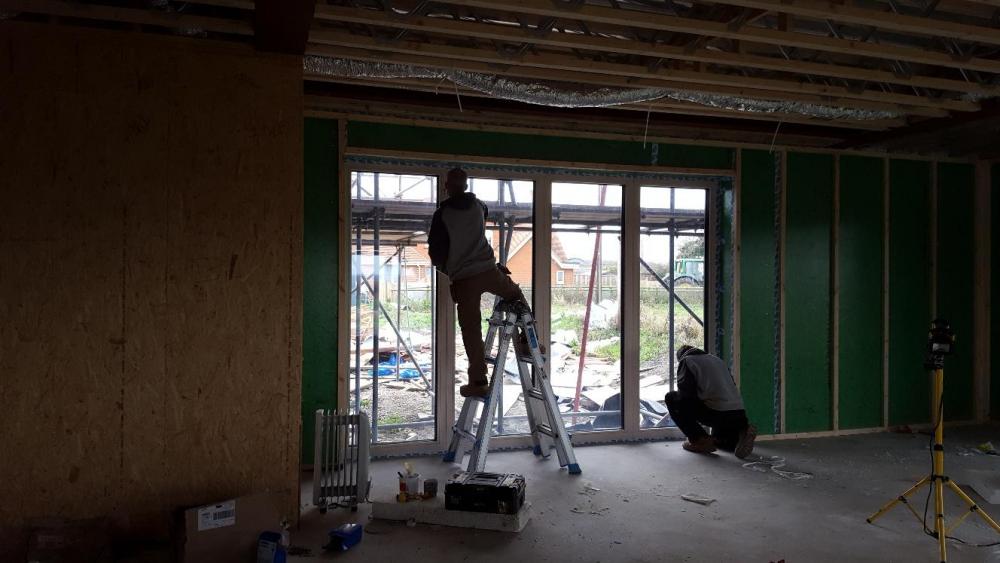