Winter is coming, the White Walkers are on the way and, in the meantime, grey snow arrived in my house on Friday.

Allow me to explain.  It seems that much of the artificial snow that you see on film sets is, in fact, made from blown cellulose, particularly to cover outdoor areas without damaging flora and fauna.  I now know this after having some cellulose insulation inadvertently blown into the garage on Friday when the insulation found a gap in a board and made its way through.  No big deal, it was spotted early on and most was re-used, but it struck me that, apart from the colour, it looked a lot like freshly fallen snow. 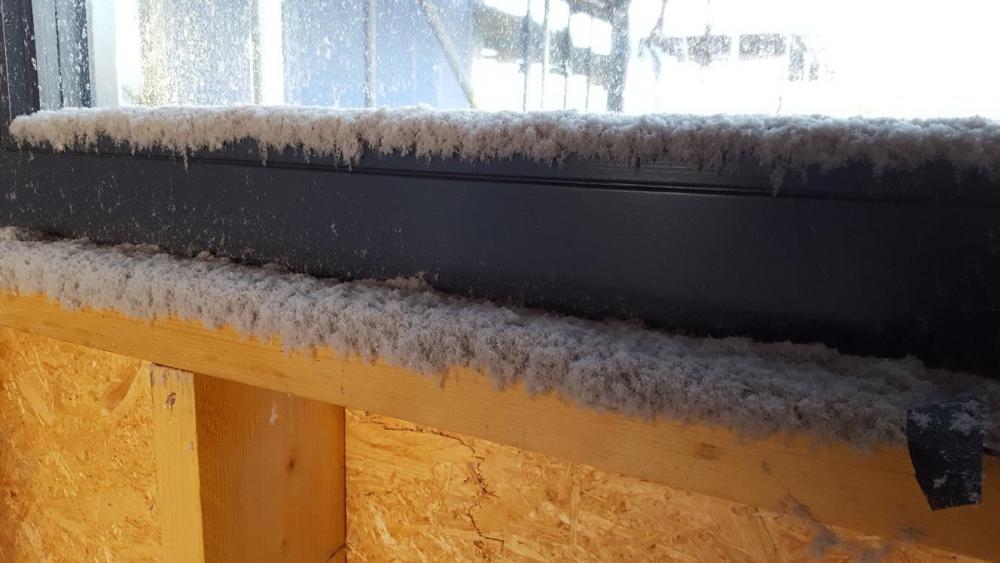 As you can probably guess from all this, the cellulose is being blown into the house at the moment.  Gordon and Keith arrived on Friday morning - a pair of very nice Welsh guys who do all the cellulose blowing for MBC and other passive type house builders, a job that keeps them busy as evidenced by the fact that they've been working on my place all over the weekend and will still be there on Monday morning.

The cellulose delivery arrived ahead of Gordon and Keith as a palletised delivery.  Not surprising, given that there were 570 12kg bags.  That's a lot of cellulose.  At this stage, Gordon can't say whether it will be too little, too much, or Goldilocks cellulose and just right, as it's ordered in by MBC on his behalf.  Here's the delivery with the curtain sides just being opened on the lorry: 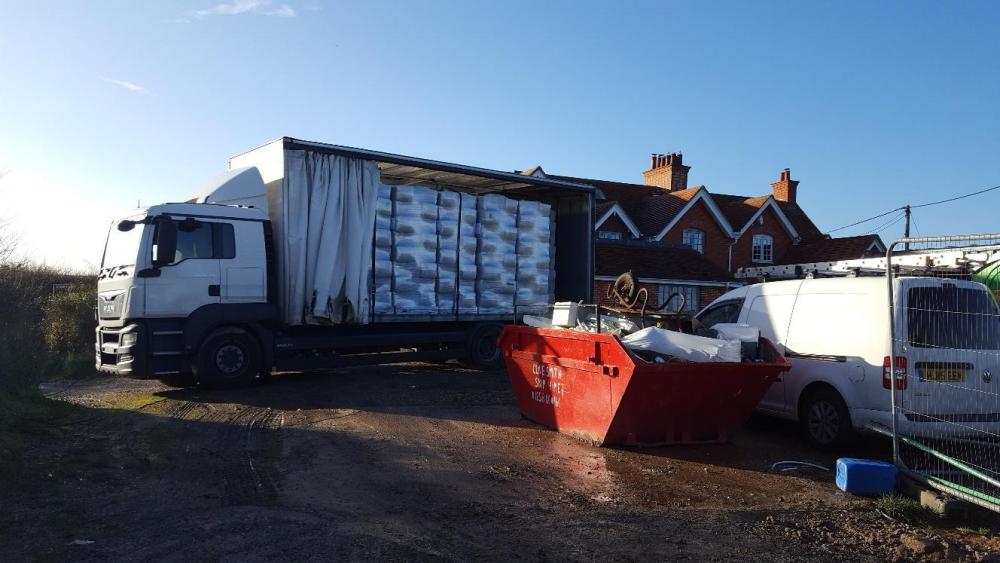 One of the pallets toppled off the forklift so the driver and I hauled the bags into the house and stacked them inside and I got a couple of photos of the packaging detail for anyone who's interested. 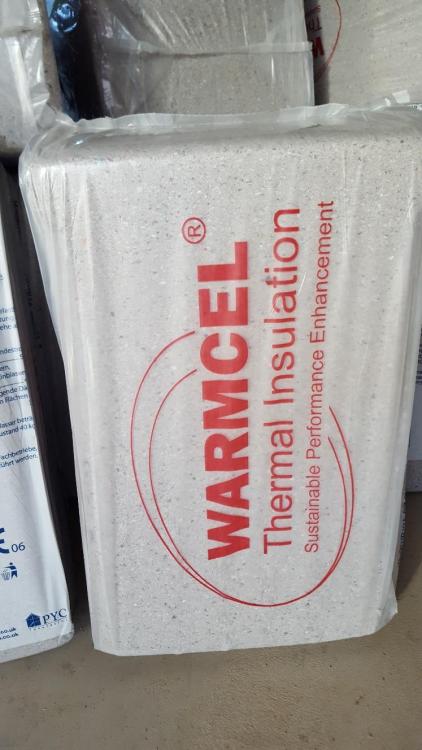 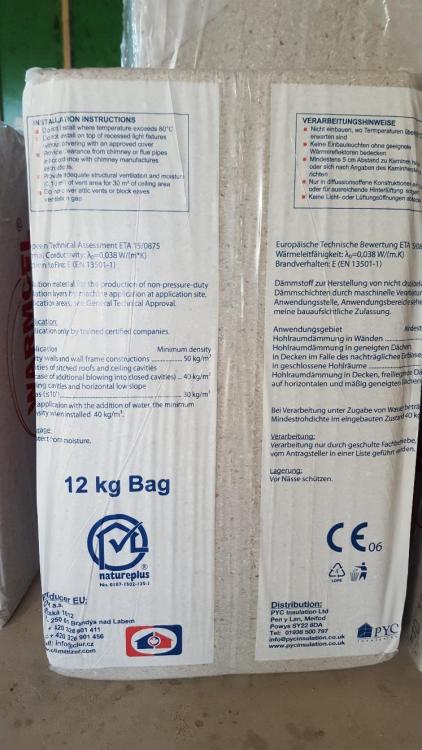 The process of putting the cellulose in is pretty straightforward.  The bales of compacted cellulose are fed into a machine housed in Gordon's van that fluffs the stuff up.  This then blows it along a tube terminating in the metal tube that goes into a hole that's been cut in the airtight board.

As he goes along and the sections are filled, numbered cork bungs are put into the holes. 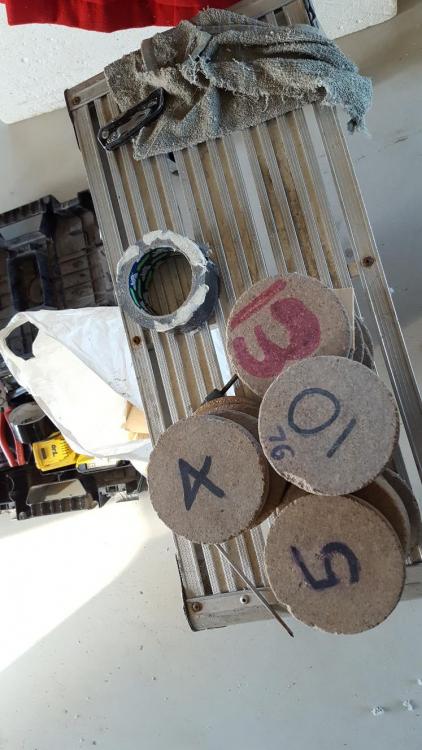 The holes are only temporarily sealed with the bungs in case the cellulose settles or takes a little while to work into all the nooks and crannies, but once Gordon's happy that this has been done, the cut out disc of airtight board is put back in place and taped up with airtight tape.

Because the cellulose is blown in under pressure, it will find any gaps or holes and do a good impression of fake snow.  The leakage in the photo above came into the garage via a loose board right at the top, above the cassette of the twin wall, after it forced the gap open.  It looked like loads - the entire floor was covered, there was a fair bit on the walls and a nice pile below the leaky board.  it looks like more, but this is barely about 1 bagful. 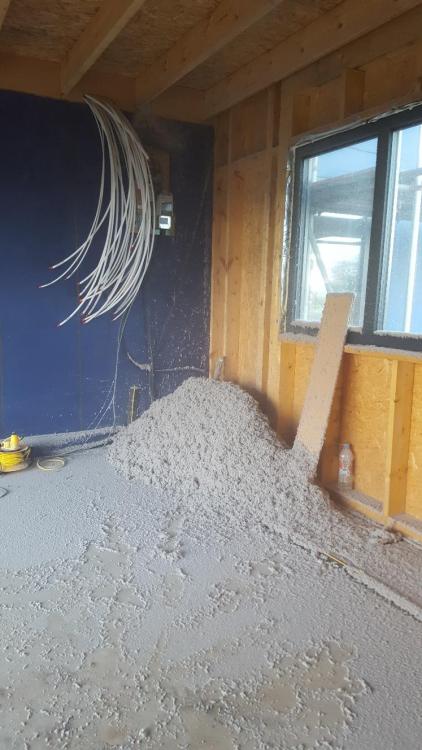 The guys have worked their way around the house, downstairs and up, getting the bulk of the cellulose in and leaving the fiddly bits over to Monday morning when they should be finishing up.

One job that absolutely had to be done ahead of the cellulose going in was a bit of first fix work for the brise soleil.  The brise soleil is a set of vertically arranged horizontal timber fins.  The timber fins are fixed to a steel framework that, in turn, is fixed to the face of the building, around the opening for the window in front of the stairs.  There are 6 fixing plates, 3 each side, and these need something behind the board of the frame for the coach screws to bit into and spread the load once they penetrate the frame.  Reasonably straightforward, unless the cellulose has already filled those cavities.

So come Friday morning, my all-round handyman and builder, Drew, was in cutting holes into the building to pack out the fixing points with some sturdy pieces of timber.  Everything was taped back up again and ready for the cellulose and, in a couple of weeks, the steel frame for the brise soleil.

Also in on Friday were the flat roof guys, finishing the final part of the garage roof.  This is the last part of the flat roof work and I'm glad that it's all finished.  I have to admit that I completely underestimated the amount of work involved on the flat roof side of things, not least the parapets that were fiddly.  As a result, I've spent a lot more on getting this done than I had estimated before my quote came in and it also edged up with the amount of carpentry work that had to be put in ready to receive the membrane.  However, I haven't busted my contingency on it and costs are still comfortable.

Here's a photo of the finished garage roof. 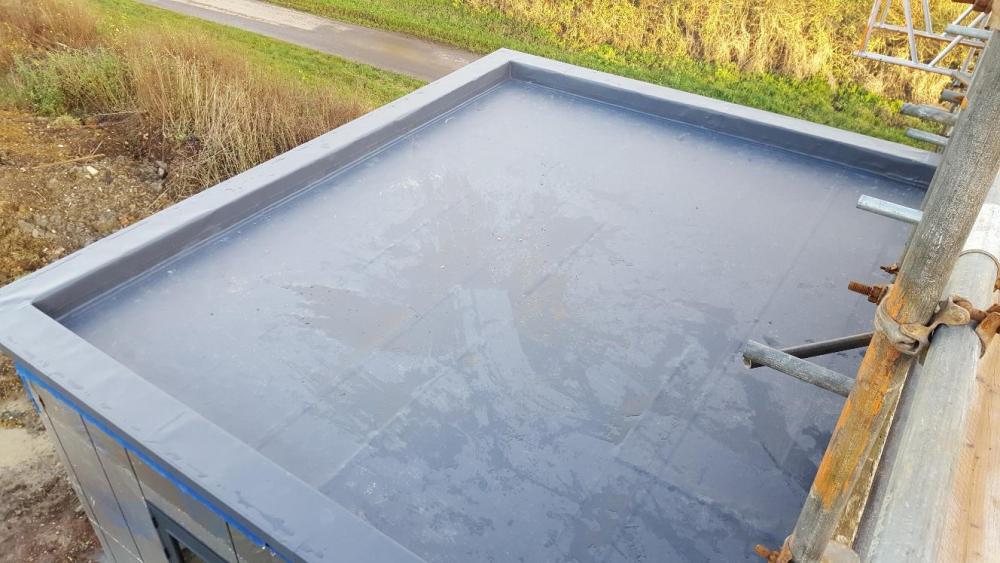 Skipping back to the beginning of the week, I had my garage door installed on Monday and I'm very pleased with it.  I find it hard to get excited by a garage door, but in so far as it functions well and looks quite nice, I'm pleased.  The door is made by Ryterna and I dealt with Joe at Dorset Garage Doors Ltd, just up the road from the house in the next village.  He is a really nice guy to deal with and his team were very nice, too, so I'd be happy to recommend them.  They also offer Hormann doors, but the Ryterna came in at about £1k cheaper, so that was the one for me!  Joe reckons the major difference is that the mechanism on the Hormann door is slightly smoother.  Personally, I'm not at all fussed if the mechanism on my door makes a little more noise for the sake of £1k.  The door itself is a sectional one and the exterior is powder coated in the ubiquitous RAL 7016 to match the windows.

We've had a bit of a tidy up on site this week, as well.  It was badly in need of it and I knew that I'd need the space in front of the house for the cellulose coming in and, once that's done, all the other deliveries for the internal workings of the house.  There's plenty more tidying to be done, but we'll wait for the rain to stop for that.

Speaking of rain, it was awful weather here last week, as it was for much of the country, and the storms lashed Dorset.  I'm still getting some water ingress via the windows, but it's not the fault of the windows.  I understand water ingress much better now having gone through so many different forms of it during the build.  The current one is because the south southwest face of the building gets the brunt of the weather and the cladding isn't on yet.  As a result, the blue paper membrane is saturated and the water seeps in around the edge of the window frame and the window opening and comes into the building.  It's not a vast amount and will dry out quickly enough and I'm not stressing over it as my upstairs slate cladding starts going on Monday.  My only concern here is that I need some first fix done for the motorised external roller blind that I'm having on the upstairs south window (this is the one with the worst of the water ingress) and my supplier was caught out by this.  I've been telling him for a couple of months that his stuff needed to go on as first fix and before the cladding, but he decided that this wasn't the case and put things off.  When he finally came down to measure up, he agreed that it did need to be done as first fix, but I don't think he will have his order from the factory before that wall is ready to be clad.  I may have to do a bit of juggling, but it's really annoying when people don't listen to what you're saying because they think they know better, without even having looked properly.

So tomorrow sees the site getting really busy again.  The (pitched) roofers are back in to do the vertical slate cladding.  The slate is the same stuff that's on the roof and will be riveted in.  The only part of the upper storey that doesn't have the slate is the surrounding of the brise soleil window, which will be the Tier cladding.  Also in is Nick and team who will be working on first fix for all the systems going in.  Drew will be helping out with boarding and general carpentry work that needs doing so that equipment can be properly position up in the loft space and elsewhere, and I daresay the alarm system guy may be along at some point, too.

My groundworker, Keith, is due in at some point next week and we're aiming to get Paul's pond dug out.  This will be an ideal test to see just how well that clay of ours holds water with the winter rains coming in and it will, hopefully, confirm our thoughts that we don't need to line it.  Judging by the moat around the house right now, we're feeling reasonably confident. 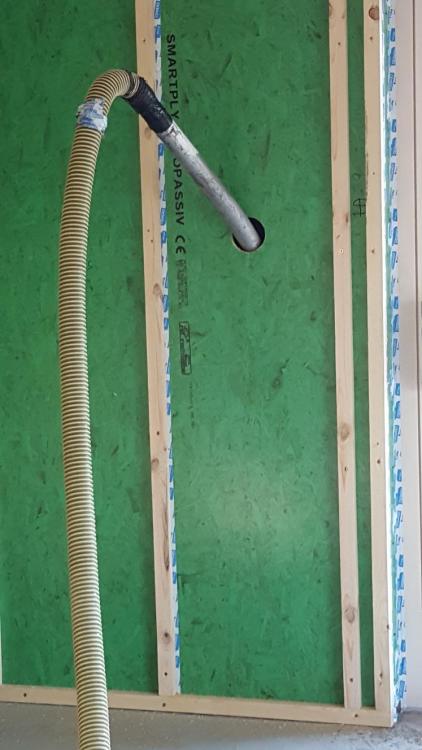