So, I know I promised  tales of cladding and roofing in the last instalment, but I have reviewed my photo stream and in fact realised that the window install was the next thing. At the end of November (as we all know, winter is prime building time), we finally retrieved our bargain basement windows from storage and brought them to site. Ah, the bargain basement windows, a tale of joy, horror, stress, fury, confusion and eventual revenge all in one.

I should explain. When we had secured the plot and had initial drawings from the architect and were waiting for engineering/calcs/building control drawings/services/everything else, we passed the time by getting hilariously large quotes for every aspect of the design. It kept us amused. So, after reading a lot on fabric first design and passive homes, off we trotted to our local Internorm dealer. Lovely showroom, excellent coffee, charming, if slightly oily salesperson. There was much discussion about our options - I asked about passive standard 3G timber aluclad. After a while, a large figure was mentioned. A very large figure. So large, in fact, that I actually was convinced that the salesperson was having a little joke with me. He wasn't.

No further coffee was offered. We gathered our coats, emptied the complimentary biscuits into my handbag and prepared to leave shamefacedly, and preferably without admitting that we were FAR TOO POOR to afford these lovely windows. On the way out, the salesman commented off handedly and rather insincerely  "Sorry we couldn't help you today. Unless you want to buy the ones in the basement, ha ha ha."

Reader, I have little-to-no shame when it comes to sniffing out a bargain. I cannot be humiliated. So, I was accompanied to the basement of the showroom, whereupon I was greeted with a £100,000 wonderland of window-related (expletive deleted)-ups. Results of inaccurate measuring, bankruptcy of developers, incorrect specifying, just general inefficiency. Of absolutely (expletive deleted)-all use to anyone, of course.

Apart from someone who had not fully finalised their house plans. And a salesperson who is uncommonly keen on crystallising some value from said (expletive deleted)-ups.

It was a partnership written in the stars. Details of hard-nosed negotiating aside (and there was someone in the room close to tears, and it wasn't me), we came away with 15 brand new windows (including 3 large sliders), a fully biometric ex display front door with side lights, a utility door, and a large panel of glass. All pretty much passive standard, some with built in blinds, some alu-clad timber, some Alu clad UPVC. For not much money. At all. A very satisfyingly small amount of money.

The architect was somewhat perturbed by this moderately unconventional approach of designing the house around already purchased windows, to say the least. For a while, I had a Quooker tap and approx £80,000 of windows as my only purchases for the house. However, he came up trumps and designed the house in such a way as you would never know that he had any design restrictions at all. The man is a quiet genius. We had cherry picked the best stuff - so all our sliders for the bedrooms are approximately (but not quite) the same size, they vary by about 30mm here and there, but they are all on different elevations of the house so you never see them right next to each other. We wanted to use one particular window in the bathroom as it had built in blinds, but it was a little too big, so we sank the bath into the floor to allow the window to have opening clearance. It looks amazing and like an intended "design feature".

So, we purchased the bargain basement windows, and following our cynical, but realistic architects advice - we got a trailer and got them the hell out of that warehouse. They stayed wrapped up and palletised for approx 2 years until that fateful day in November.

Now, what we should have done was quit while we were ahead, taken note of the surpassingly large number of (expletive deleted)-ups and run like the wind away from that warehouse. You will not be surprised to learn that this did not happen. We still needed our large feature window - a 5m wide, 2.7m high alu clad timber lift and slide window and matching fixed panels above. This was not cheap. Very very not cheap. But it was lovely. We decided that as we'd saved so much money with the rest of the windows, we could justify this lovely thing. We got a good, although still bloody expensive price on it, paid a 50% deposit, and were instructed to let them know when we were ready to have the window produced - as we hadn't been through building control fully yet, so didn't want to press "Go" just then.

So, all well. We got on with what we needed to do, engineering, building control, life etc and gave no more thought to it. We get our building warrant. We phone up the showroom to say "yay! please make our very highly priced window!". Only, there's a disconnected tone. Odd, we think - must have misdialled. We try again, same thing. We google. Website down, emails bounce. A light sweat breaks out.

The insufferable shits went bust. No one told us. It may or may not be directly related to the basement of (expletive deleted)-ups. Internorm had never heard of our order and had not received our deposit, so couldn't help. Now, thank christ that I am naturally untrusting of salespeople and INSISTED on paying £101 of the VERY LARGE deposit on a credit card. Section 75, how I love thee.

We got the whole lot back. Eventually. After a lot of paperwork and phonecalls. But now we have a load of second hand windows, some with bits missing and no-one to fit them. And no-one to order our lovely slider from

Help was on the way from an unexpected quarter though. Our house build is being filmed for TV,  and we happened to have a filming day a couple of weeks later. Someone on the crew gave us the details of a helpful person within Internorm, who passed us on to another dealer who honoured the original price for the sliders, came up from England to fit the windows, supplied all our missing bits and were generally wonderful. So, we come to November.

There are two access points to our site - one at the rear, which we can just about fit an articulated lorry up, and one at the front, on the extremely busy main street, that is cobbled and 2cm narrower than a transit with the wing mirrors folded, and only just as tall. The Internorm dealer had already made a site visit to review the access and made many sucky-teeth noises, but said "it's ok, we'll get a robot handler up from Leeds that can hold the window at 45 degrees while we drive it up." "Ooooh", we think, "A robot! Technology will save this whole scenario".

The day started relatively badly when it transpired that the artic driver, instead of turning right when he should have, so he could drive straight down the street and have the windows on the correct side for unloading, had in fact, turned left and was now in the middle of fully reversing down a medieval street so long that it takes approx 8 minutes to walk from one end to the other. At 9am. Also, he was (I think) Romanian, with no English, and there were no Romanian speakers amongst the installation crew.

So, when he finally arrived, after monumentally pissing off approximately 14 million local residents, the windows were on the wrong side and no room to turn. So we had to unload the rest of his lorry, stack it up on the street, taking up virtually every parking space in the place and drive the telehandler across the street, blocking all the traffic to get the window off. It is massive. Securing it on the tele handler is not a quick process. There was a lot of shouting.

Also, did I mention I'm 6 months pregnant at this point? 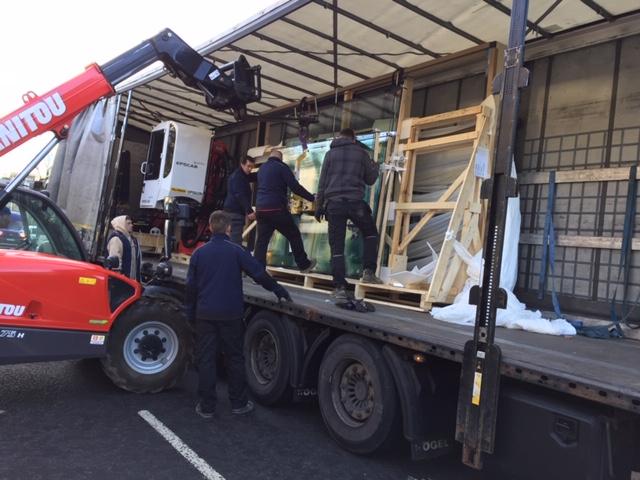 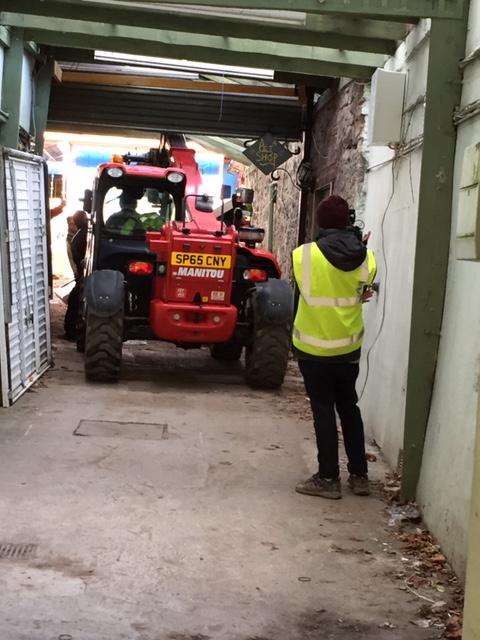 So, once unloaded, we look around eagerly for the promised technology laden robot. Looking a bit sheepish, the install crew confessed that it hadn't been available, but "don't worry, we brought something else". Great, I think! No problemo. The "something else" appeared, to my untrained eye, to be a couple of skateboards. So, we ended up with our massive window being rolled up the close on a couple of skateboards, being held at 45 degrees by a telehandler and 10 or so guys not all of whom shared a common language. To be honest, it went better than it should have done. The only hairy moment was when the tyre of the telehandler hit a drainpipe and it cracked with a noise EXACTLY like breaking glass. I was at the street end and couldn't see the window, just heard the cracking noise and a lot of a shouting. I was pretty convinced I was about to HAVE the baby.

Terrifying. But, all in all ... TADAHHH! 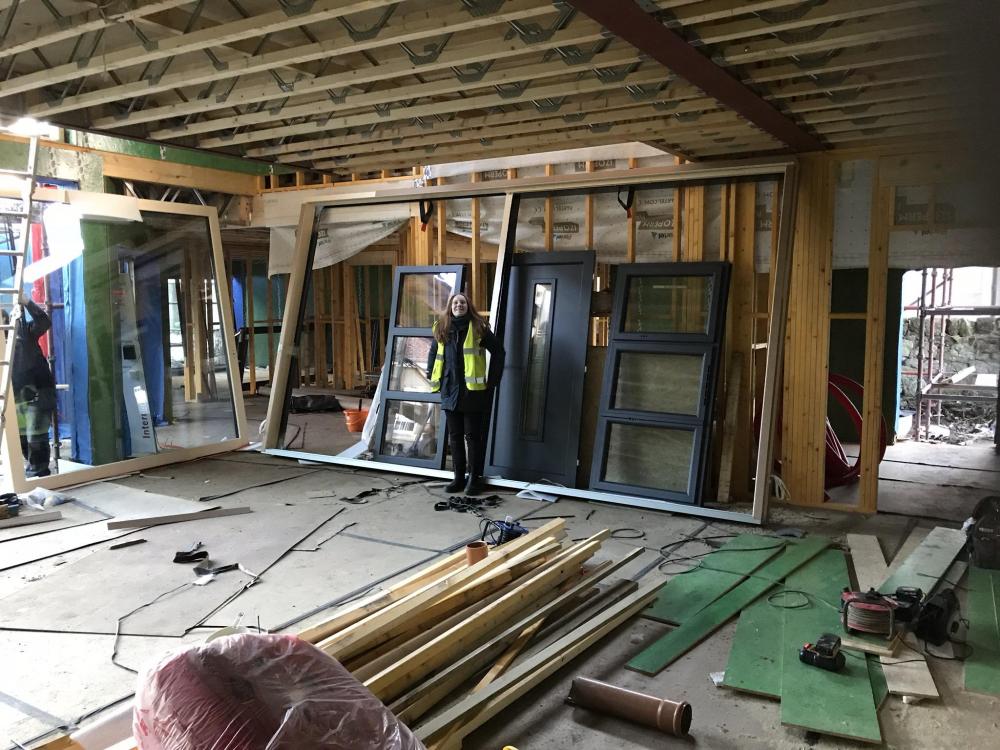 Over the next couple of days, all the windows were fitted and we were (nearly) watertight. Exciting progress.