Before we get into the events of the day, I have a little quiz question for readers of the blog.

- What is the connection between my build in rural north Dorset and a mystical character from the legend of King Arthur?

Answer at the end of today's entry.  All will become clear.

Today was another busy day on site, with 3 main areas of activity - flat roof, pitched roof and windows.

Let's start with the windows, as they are (mostly) looking great.  Both of the big lift and slide windows in the living room area are in now and quite a bit of the upstairs glazing is in as well.  The flat roof guys changed their work order to get the membrane from the balconies and parapet gullies overlapped on the window thresholds so that the windows could be installed on top of them.  This will allow the sarnafil membrane to then be folded up slightly against the window frame and give a shield against any water that tries to force its way in under the window frame.  There's a bit of debris on top from the window fitting, but you can see how the membrane extends inside from the balcony.  This is the west facing bedroom first thing this morning. 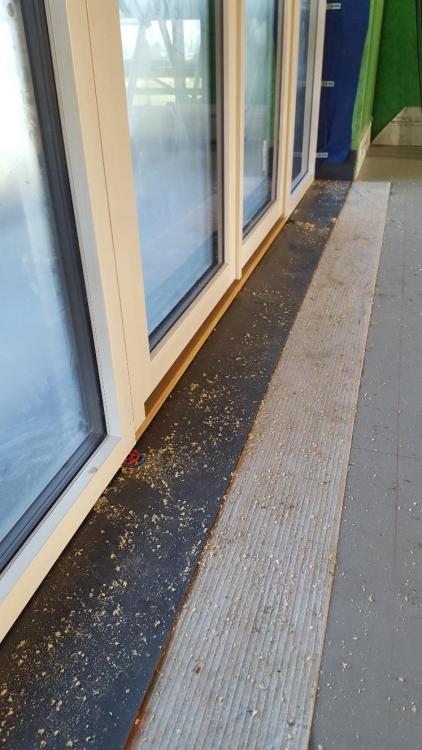 And here is the west facing lift and slide window, looking west down towards the woods.  Note the view of the woods, which are in a slight valley formed by the River Lydden.  It is relevant for a later comment. 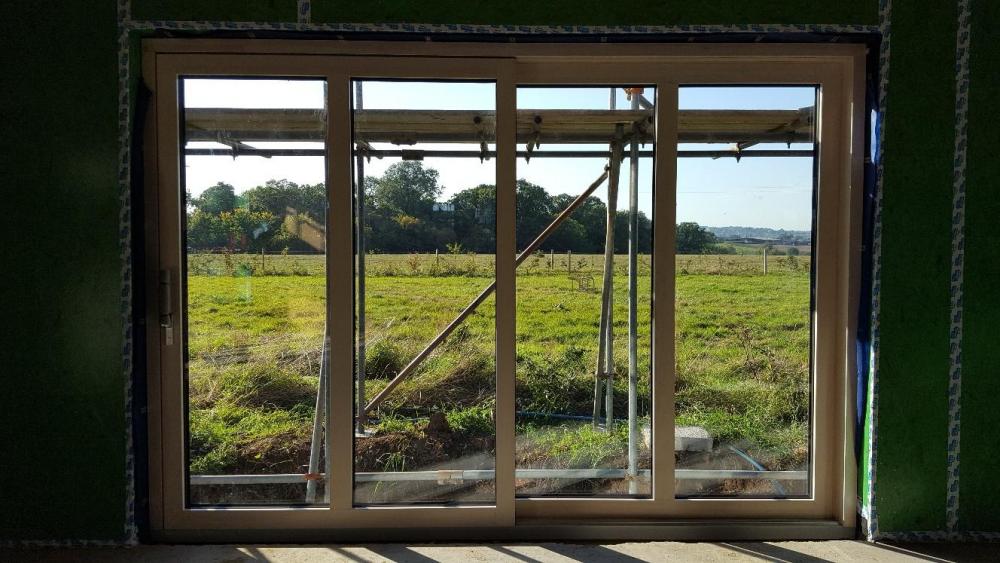 Unfortunately, all didn't go to plan for the window installers today.  The final window in the living room area faces south towards my neighbours' cottages and is a four pane fixed window.  As the bracket was being screwed into the frame, this happened: 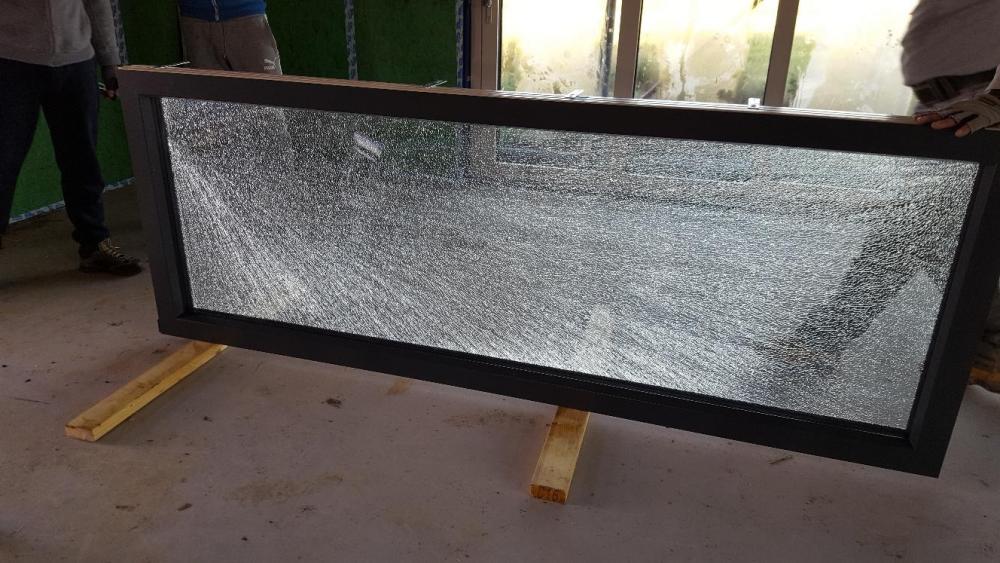 The window installers looked very troubled by this, not surpringly.  It's the inner pane of glass that has shattered and you can see that it radiates out from an obvious stress point.  Stepping aside from the obvious downside of this, the very small amount of my brain devoted to aesthetics allows me to think that in a strange kind of way, it looks rather fetching.  Then the far greater logical part of my brain tells the aesthetic side to get a grip as we have a broken window.  So, what happened next, I hear you ask.  Well, the window was put in situ and fitted along with the other 3 panels and Norrsken have ordered up a replacement pane and internal bead.  They are, however, up against the clock on this one, as it can take several weeks for the replacement to arrive and MBC are now due back on 5th November, by which time all my windows must be fully installed and as they need to be in order for the air test to be carried out.  Tick, tick, tick.

Breakages aside, I'm delighted with the windows.  I know that it's possible to go to the ends of the earth in research and expense to seek ever thinner frames and other features and that my windows are certainly not the most minimalist products out there.  However, given the expanse of glass compared to the width of the frames, bearing in mind that plasterboard will reduce the visual appearance of these in due course, I think that the frame:glass ratio is more than pleasing enough for me.  Also, the profile is very flat, both inside and out, and combined with the washed wood interior finish, I am content.  Tomorrow will be very interesting as the installation team have quite the challenge ahead of them when they fit the floor to upper ceiling window that is in front of the stairwell.  It's one heck of a piece of glazing, so I think we shall all be holding our breath then.

Moving out of the building and up to the roof areas, both roofing teams have worked their socks off today.  It was hot work as today's weather was warm/hot, sunny and lovely.  Let's start with the flat roof guys, who have been very busy with their protractors getting all the framework in place to make the capping that sits on top of the parapet, ready to receive the membrane that will wrap over it.  you may recall that due to the MBC construction methods, I have a cold roof.  This means that it needs to be ventilated, and this can be a little tricky when you need to have a membrane on the flat roof and it needs to go over a parapet.  Fortunately, I visited the build of @Weebles a little while back now and they had exactly this set up, so being the diligent researcher I am, I did nothing more after that and just shamelessly stole their idea.  And their flat roof people.  Why re-invent the wheel?

From the firring pieces and OSB that I pictured on yesterday's blog entry, more of the membrane went down over the main part of the stairwell roof: 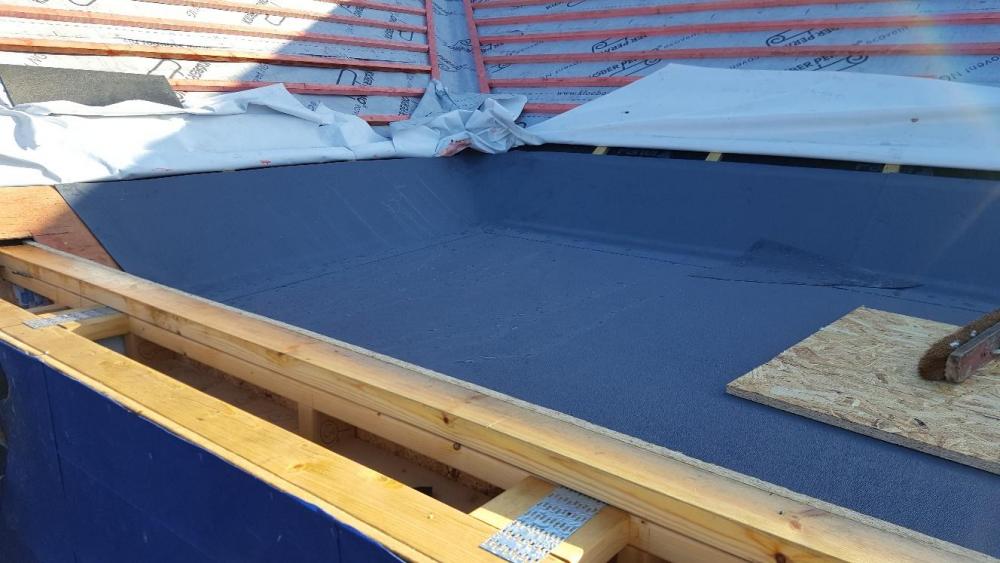 The flat roof guys had to put in the upstand that goes up onto the pitch and they've been measuring and sawing as much as they have putting down membrane today.  Here's the framework they made ready for OSB to go on top and form the cap over the parapet: 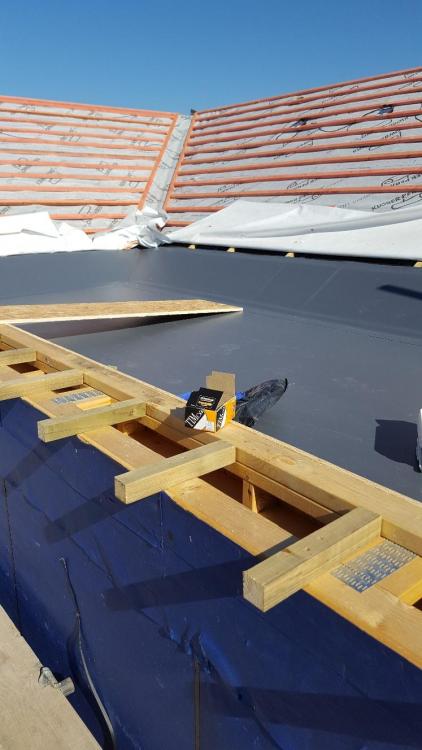 As well as forming the cap over the parapet, this area also needs a drain for all the water that will come down from the pitched roof, and this is a hole drilled through the parapet and a drain liner inserted through, then the inside will be coated and sealed with the membrane. 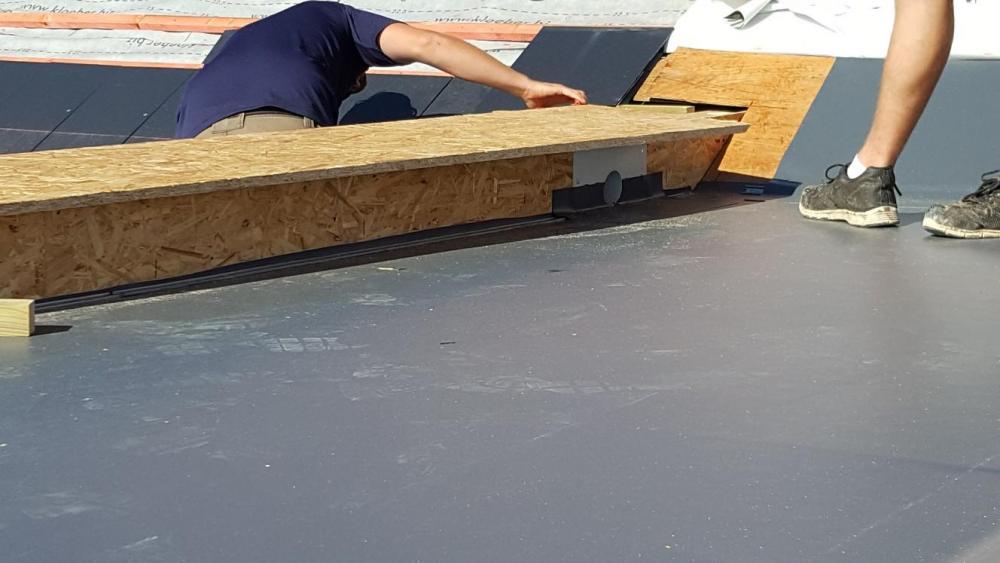 Prior to putting the membrane on, the OSB is rollered with a contact adhesive (red), then the membrane is heated to activate the glue.  This is where they are bringing in the membrane from the parapet gully to run under the window frame, working ahead of the window installers. 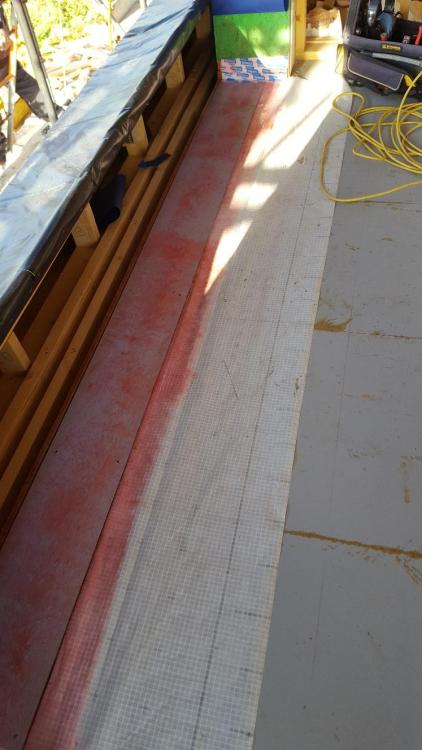 In their current allocation of time, I have the flat roof guys for one more day, so I'm not sure how much more we will get done, perhaps the remaining balcony, which would be good, as the balustrades are going in next week.

And so onto the pitched roof.  The pitched roof team were badly delayed yesterday as the tiles that were coming from Bradfords in Yeovil were supposed to have been on a morning delivery but didn't arrive until 3pm.  They made a good start yesterday but have gone at an amazing pace today.  They've done all they can on the east/south faces for now, pending the PV installation.  This picture was taken just after 2pm and you can see that this side of the roof is still getting a good amount of sun, and had been since sunrise. 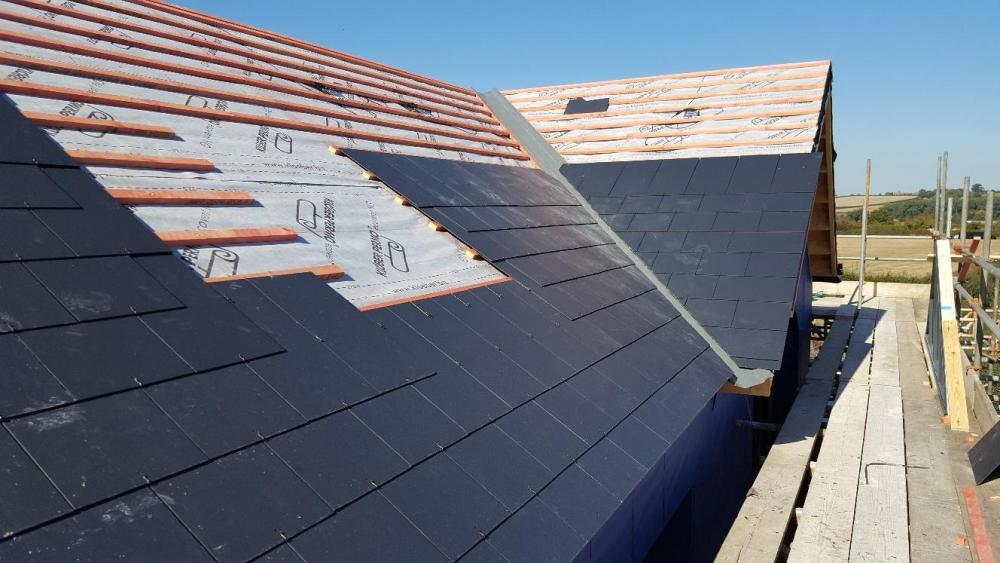 At the same time as that pitch being tiled, the guys were also working on the long north face of the roof, leaving gaps for both the velux and the MVHR penetrations.  This is early afternoon: 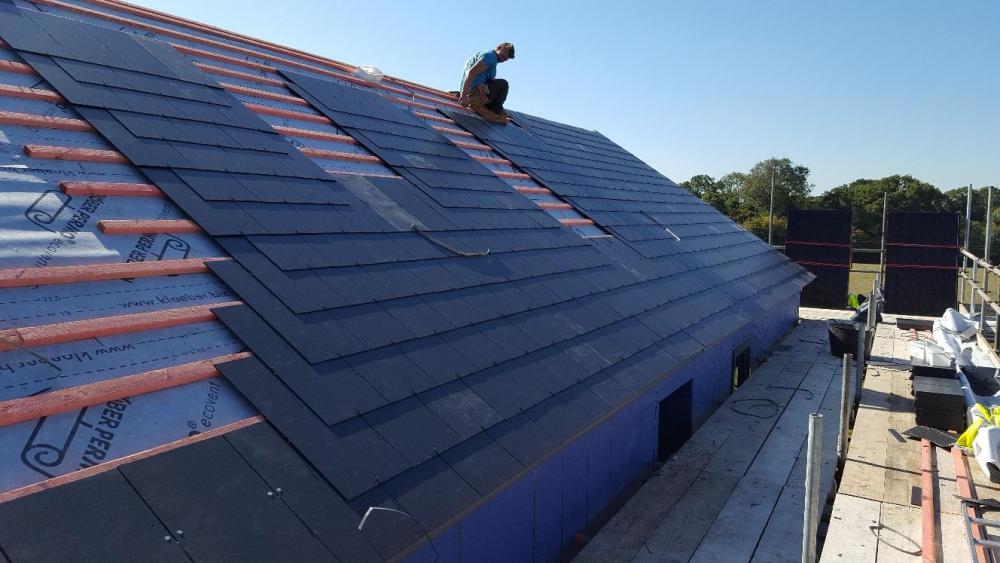 And by the end of this afternoon, they had got this far: 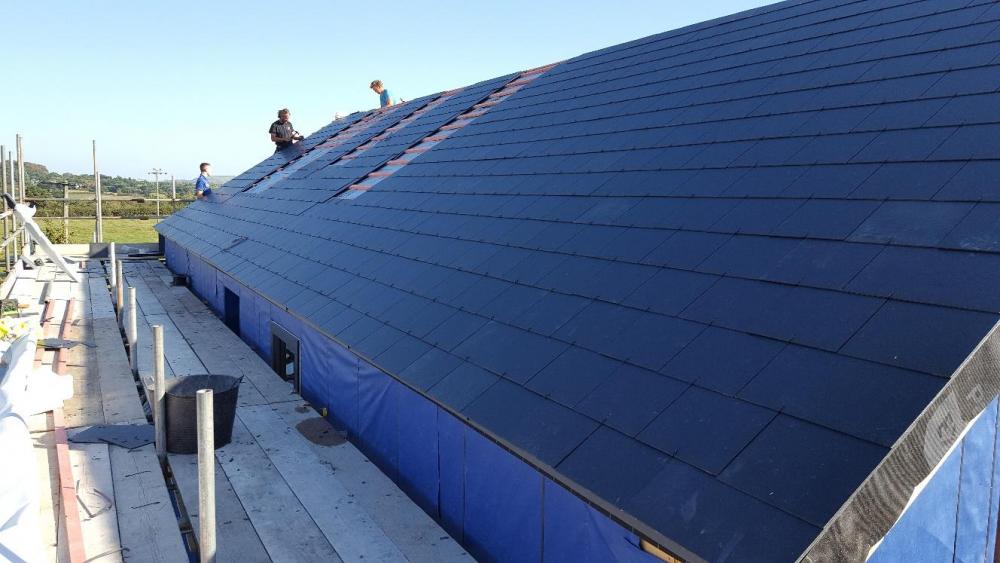 That's about it on the roofing today, but the scaffolding is also being used as a storage area.  As the telehandler was on site yesterday, as much heavy stuff as possibly was lifted close to its final position yesterday, and the solar panels are stacked up there now.  My panels are black on black (not quite the title of the AC/DC track) and from LG.  As these things go, I think they're a nice looking piece of kit: 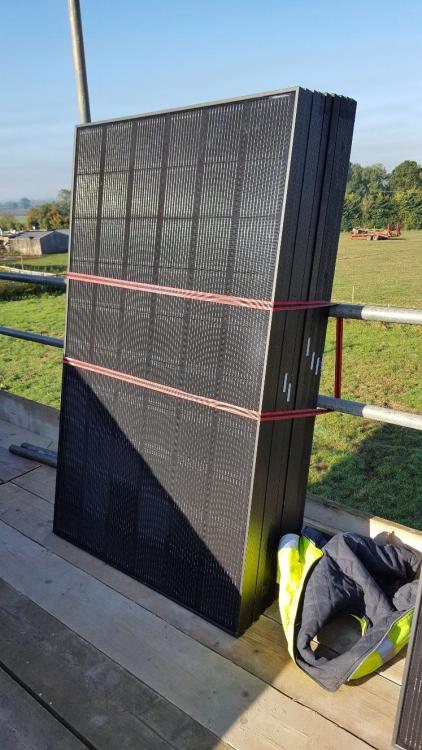 And so now to the question I posed at the start of today's entry.  There are a few mystical characters in the legend of King Arthur, but the one I have in mind is the wizard, Merlin.  I hope you're enjoying the blog, guys, and wasn't it a lovely day for buzzing a self build in north Dorset?!

Let me explain to, by now, confused buildhubbers.  I've mentioned that there seems to be a definite airborne interest in my build, mainly stemming from RNAS Yeovilton and up until this week, it was predominantly the Navy Lynx helicopters.  I got an upgrade this week and having nearly peed my pants with a very low buzz from a Hercules yesterday, we had an interesting buzz from a Navy Merlin helicopter this afternoon.  I need to give this a bit of context, though.  The Merlin is a big bugger with its three engines and gives out a very distinct bass thud that doesn't quite make your liver tremble in the way that a chinook does, but it's not lacking in long wave frequencies.  So let me take you back to the view that I asked you to make note of earlier, looking west over the field and down towards Bagber Wood.  I couldn't hear Ride of the Valkyrie, but there was undoubtedly a whiff of Apocalypse Now as I heard the distant but increasingly loud thud of a helicopter from the direction of the wood, before it rose up from the dip of the valley, over the wood and well and truly buzzed us, flying low and slow over the house.  Nice to see you guys, keep up the good work, but honestly, you'll get a better view from the ground.

Victor Zulu signing off until tomorrow. 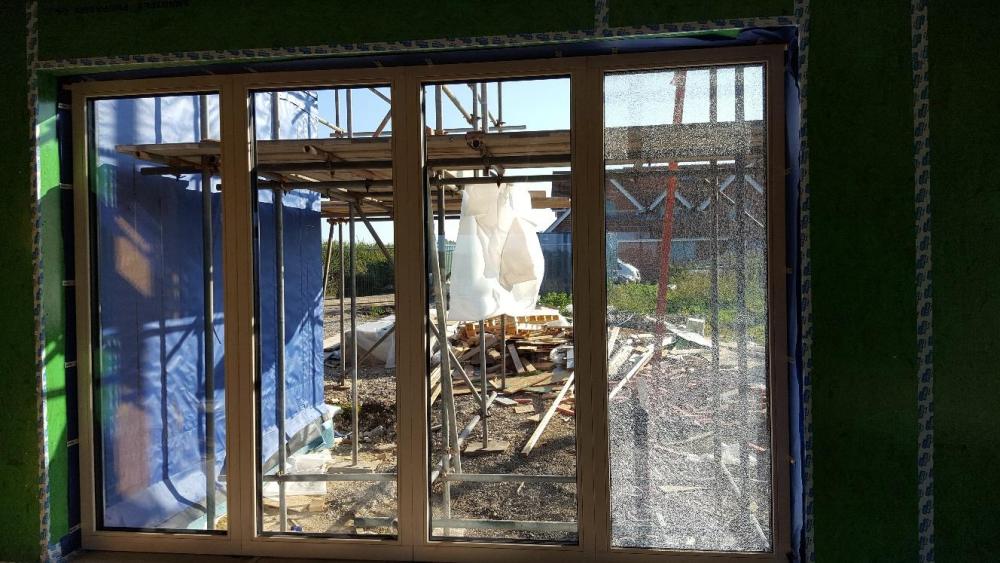