After the rock 'n' roll plastering at the start of the month, the last 2 weeks have been all about getting stoned outside.  The only drugs involved were caffeine and sugar, however, and the stone was for the perimeter drains around the house along with a few other bits.  Inside, I've been busy decorating, of course, but photos of white rooms are getting a bit samey now, so they will be limited for the moment.

I've been using Richard Moore Contractors for this phase of the groundworks, and they've been a pleasure to have on site.  Really nice guys who know their stuff and got on with the job with a minimum of fuss and hassle.  One of the big advantages for me of using a larger firm for this part of the work is their access to all their own plant and equipment - everything they needed was on hand when and where they needed it and I didn't need to organise anything for hire or delivery.  A financial advantage of this is that the cost of the equipment is, effectively, free of VAT for me as everything is zero rated within the cost of the works.  With a job this size, that can make a sizeable difference when compared with using non VAT registered labour only for jobs.

This is at the start of the work, with trenches still being dug out and making sure the services that run around the perimeter of the garage are all staying in place.  At this stage, everything was still in its post-winter boggy state, and the reduced dig left around the house was still looking like a very mucky moat. 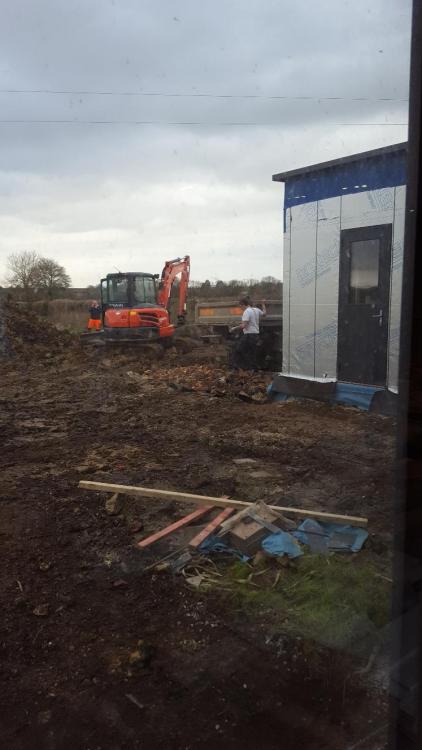 The moat was showing no sign of emptying so the guys pumped it out once they were ready to get started in there.  Although the water around the house needed to go, we wanted to retain as much run-off from the roof as possible and divert this to the pond. To this end, all the guttering runs get collected into drains running around the western side of the house then to the pond via a drain that's been buried and comes out towards the top of the south tip of the pond.  The outlet has been kept high where it exits to the pond to make sure that it doesn't flow back towards the house if the pond ever gets that full; there is also a decent fall on the pipe itself.  This is part of the storm water drain that goes around the lounge, facing west. 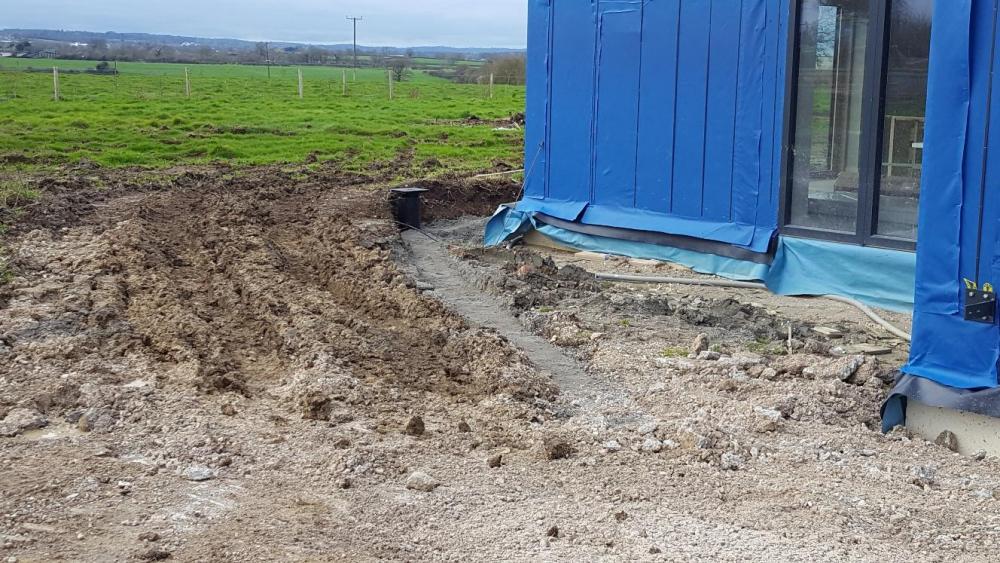 As well as putting the drains in, I asked the team to stone up for 1m beyond the building.  This needs to be done anyway, but I also needed to get this done so that there is a firm base around the building for the next part of the team to put the stone cladding on, and also, once that's one, for the Contrasol guys to fit the brise soleil rails and fins outside the stairwell window.  Here's the stoned up pathway along the front, going around to the west face. 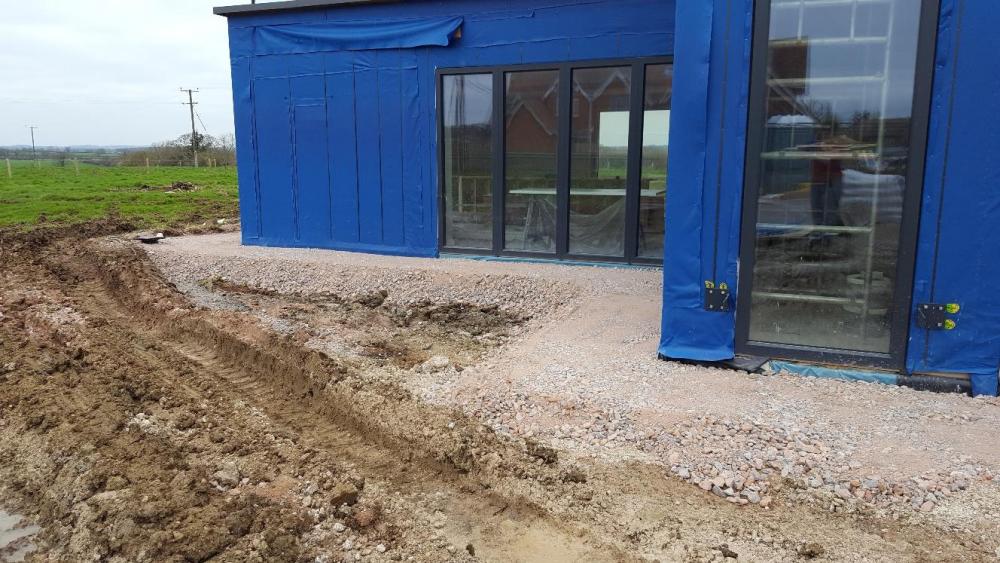 Whilst we're looking at the front door, I'm delighted to be able to post the following photo.  For a few months now, the front approach to the house has been a bit on the wet side of things as the concrete that was spread there last autumn has gradually deteriorated with the lorries, vans and cars that have travelled over it on a daily basis.  As well as having to walk the plank over some particularly deep puddles, the trigged up pallets and boards bridging the moat directly in front of the door was becoming increasingly perilous.  Danger no more, however, as we now have solid ground in front of the building - luxury! 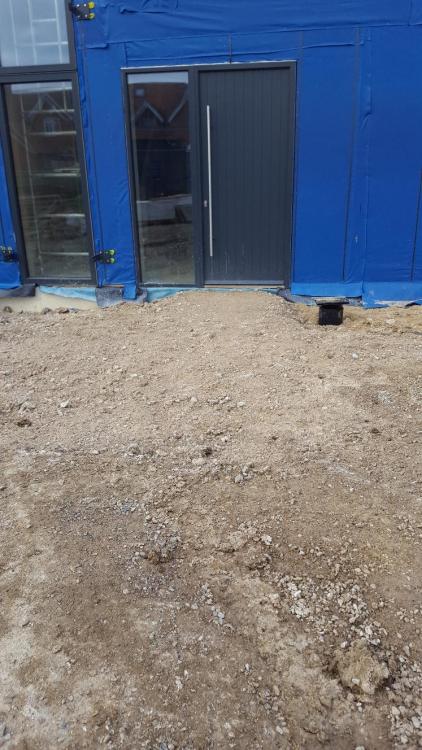 A peep a little further around the corner shows the continuation of the path and the sewage tank going in. 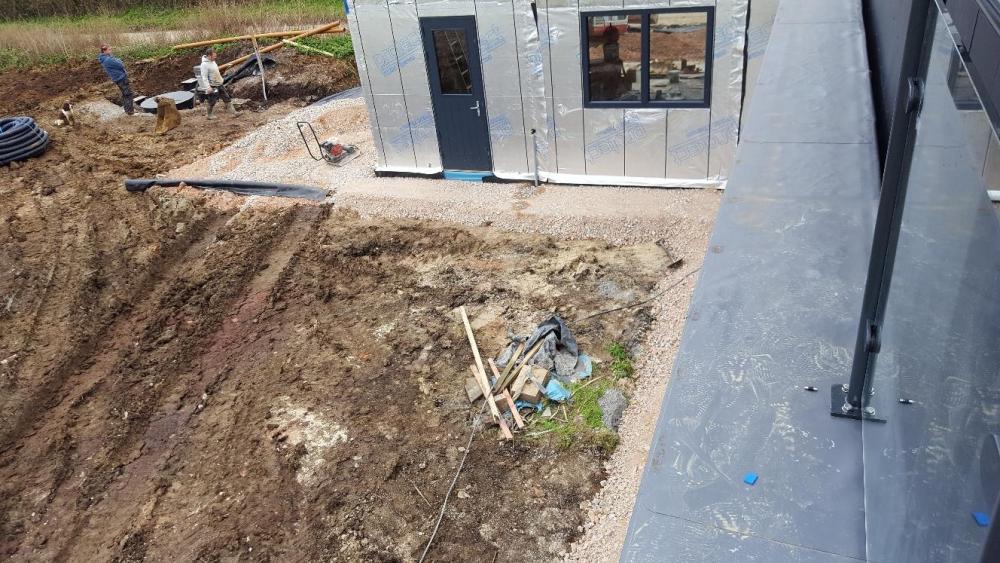 Prior to the tank going in, the old septic tank had been desludged - a nasty little hole in the ground that no one wanted to fall into.  This was back-filled with stone and rubble then covered over when the spoil from the site was re-distributed. 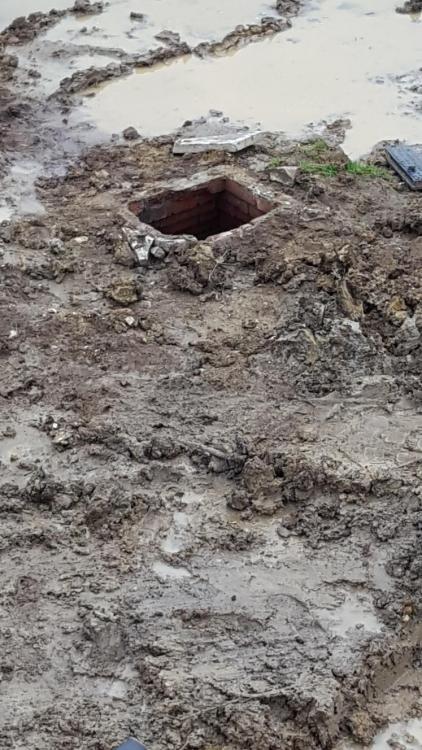 When we originally bought the site, the garden for the old bungalow ran to the north, parallel with the lane.  The land has a slope to it going from the field down towards the lane, but there was pronounced hollow running the length of the garden that we had wanted to level out as this should make the area more useable in the winter, when there is a tendency for everything to get waterlogged.  There was still some spoil left over from the pond, as well as everything that was dug out for the drains, so that was used to backfill.  We have kept the topsoil that was scraped off the pond area, too, and this will be spread over the clay to give something decent to plant into. 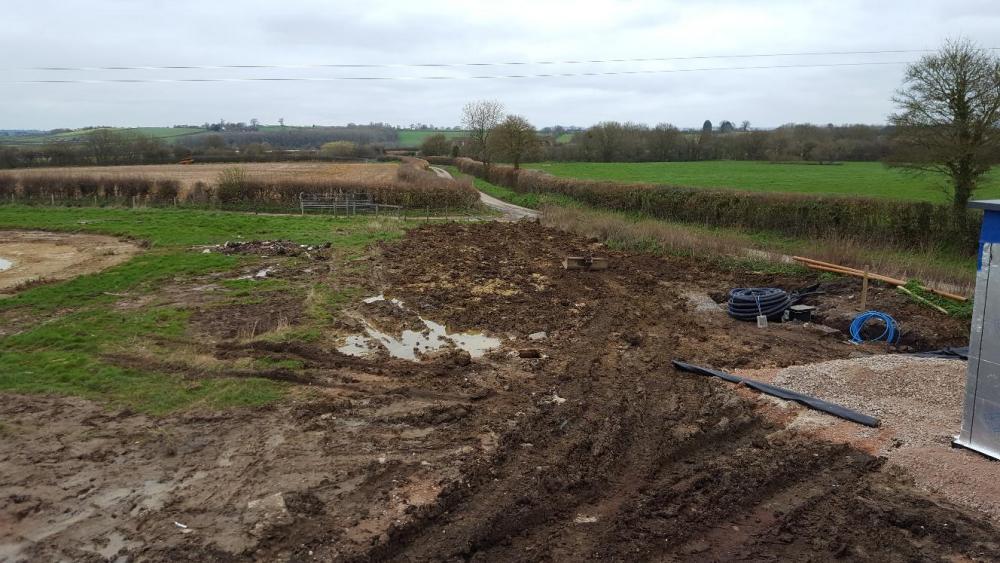 We are having an area of hardstanding next to the garage because, knowing what we're like, we will only be able to fit one car into the garage by the time we've filled it up with all the other stuff that can be put into an area like that, so we will need somewhere decent to park the cars.  It's also useful for the sewage lorry to be able to pull in there and sling a hose over to the sewage treatment plant for de-sludging without blocking the lane.  The guys have done a lovely job around there, and it's all nicely edged with kerb stones that flow into the edges of the driveway and down onto where it meets the lane.  The amount of stone that's been put down on the site is large, over 100 tons, but then there's been a lot to do and we've also stoned up on the corner between the stairwell and the lounge where will we will form a patio of some sort.  Here's a view of the hard standing going in, taken from the balcony.  You can see where all the stones have been concreted in. 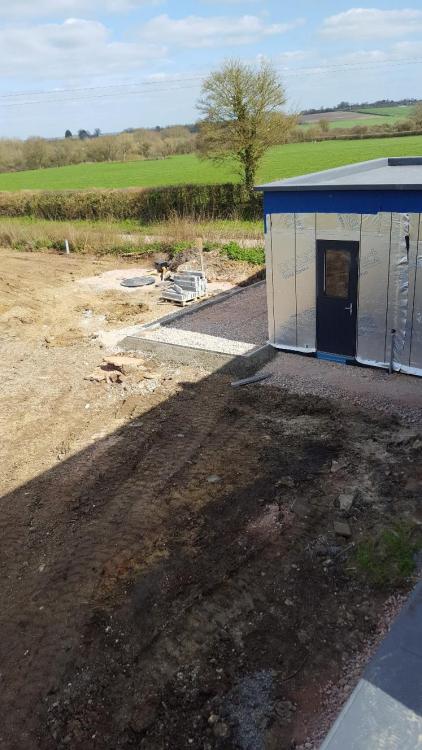 And another taken from ground level. 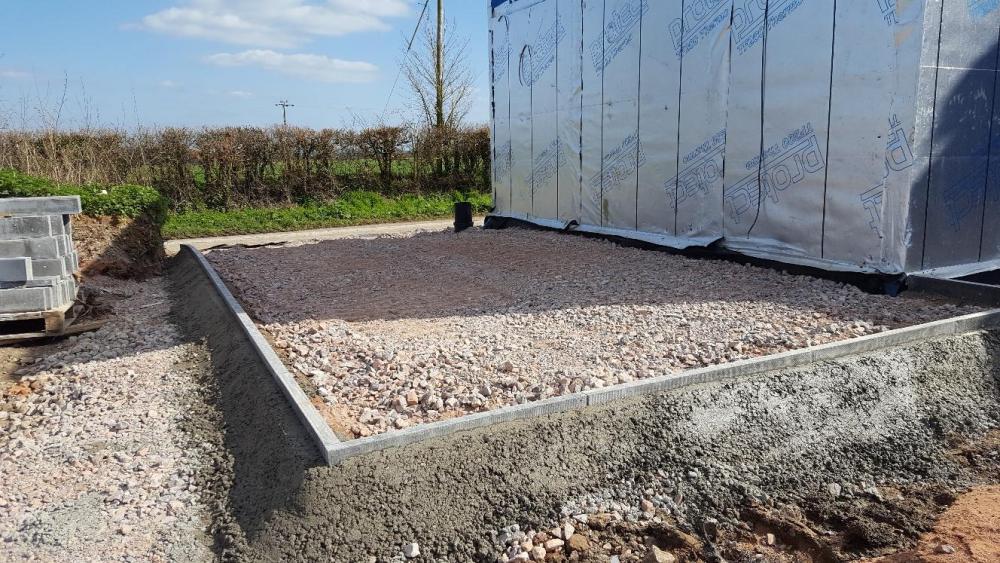 The hard standing merges into the driveway in front of the garage.  The roadside edge of this has been increased in width by 2 kerb stones each side, on the advice of Matt, the groundworker.  Besides looking better, it gives a much easier sweep up to the garage as there is quite a height difference between the garage floor and the lane, so turning in will be much easier with the more open drive.  Here's the first of many lots of stone going down to build up the level. 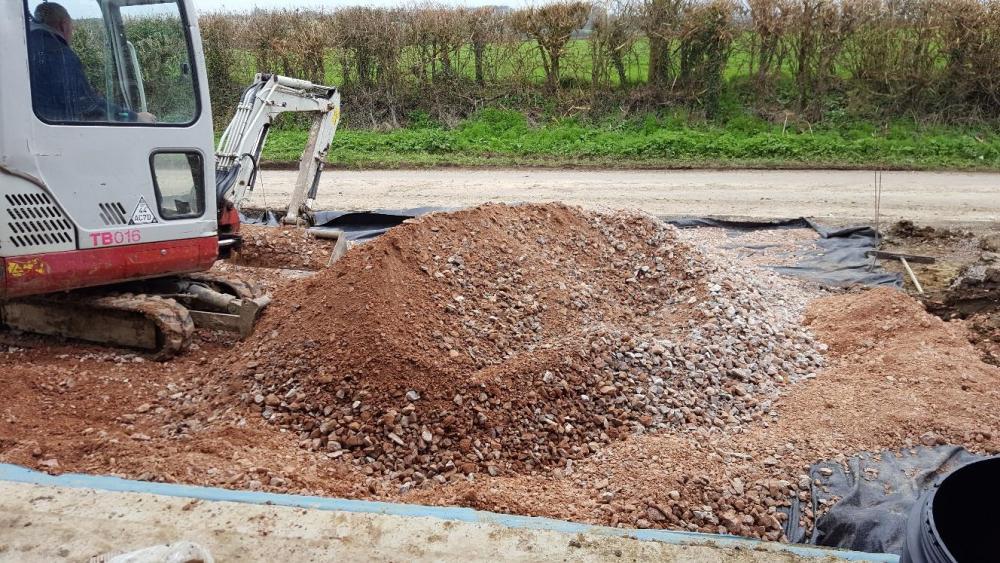 More of the same from the lane: 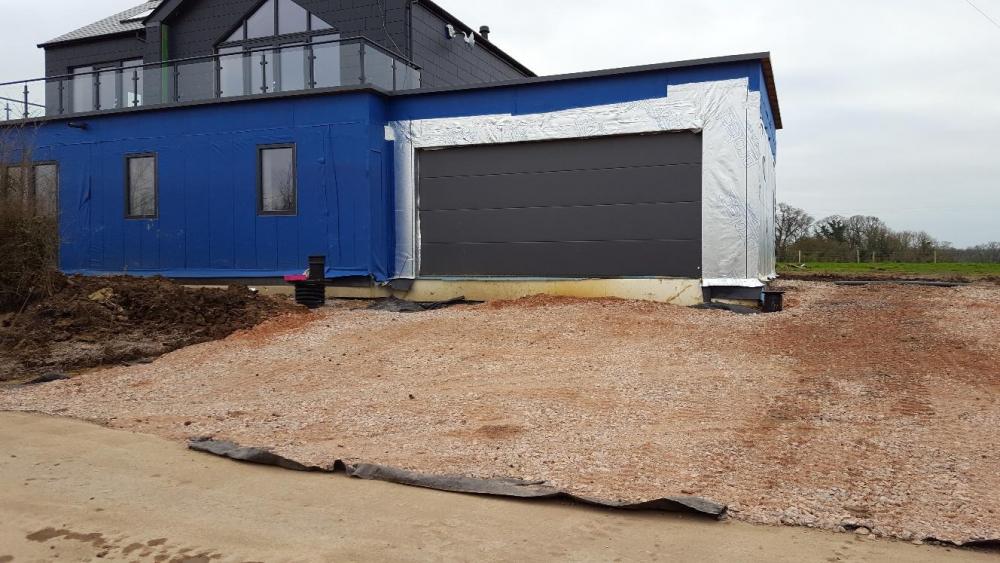 Then with the kerb stones concreted in. 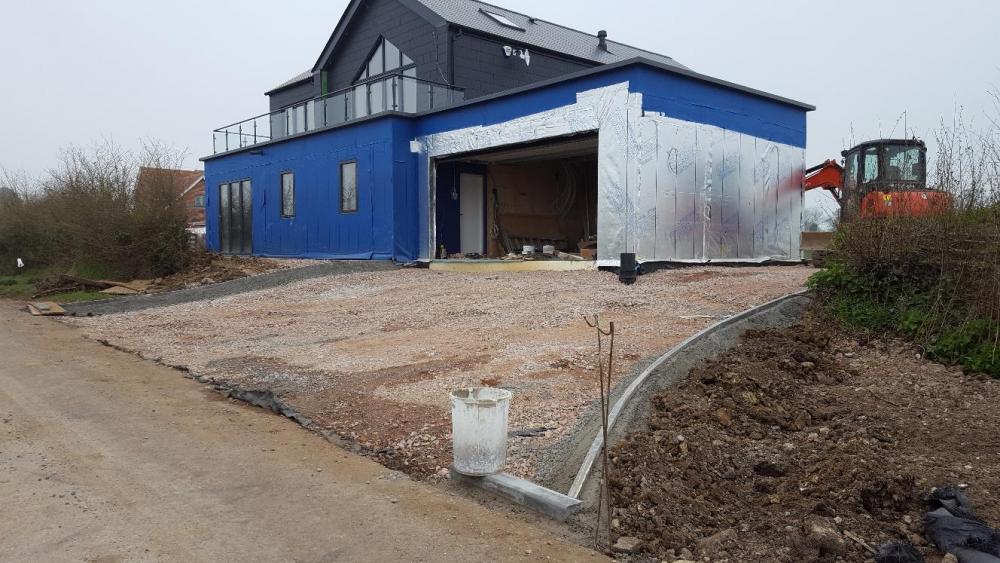 And finally, with the kerbs along the lane/drive border. 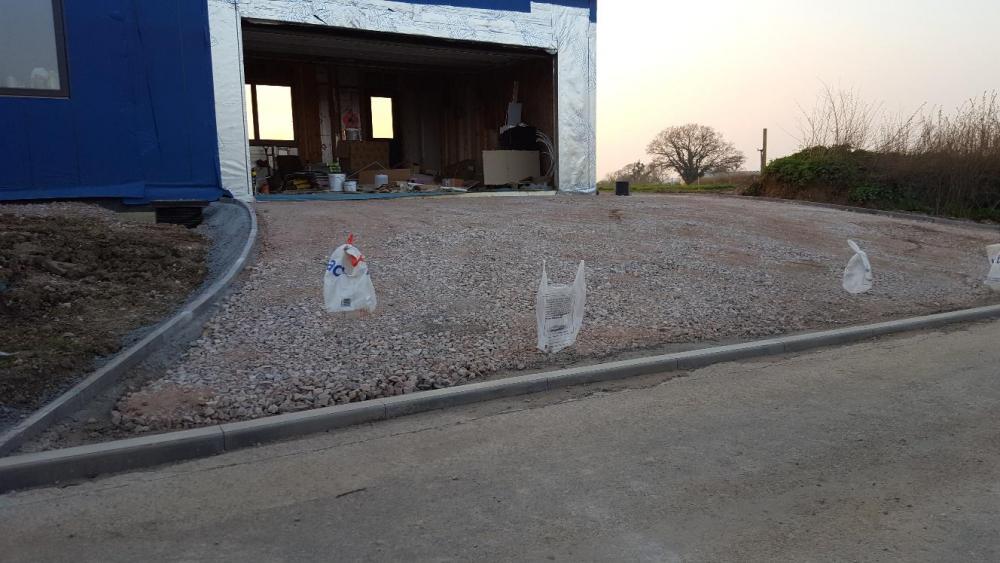 Everything there is ready and waiting for the final layer of tarmac, which will go down some time next week.

Meanwhile, I've been doing yet more painting indoors, as previously mentioned.  The large airless paint sprayer I borrowed from Jeremy is a little poorly at the moment and will be in the sprayer hospital tomorrow to have its tubes cleared out and should be back in service very shortly.  I will need it again as I still have one bedroom to spray and I need the power of the large machine to reach up to the vaulted ceilings.  However, I still needed to get the mists coats done on the landing, stairwell and hallway last week, as it was the ideal opportunity to get these high traffic areas done since I was the only one in the building.  I was a bit stumped initially, but I had noticed the little electric sprayers in Lidl on Monday and then Weebles mentioned that they had bought one from Aldi.  I figured nothing ventured, nothing gained and for £25 it was worth a shot.  So I dashed down to the nearest Lidl in Blandford and got one of these little beauties. 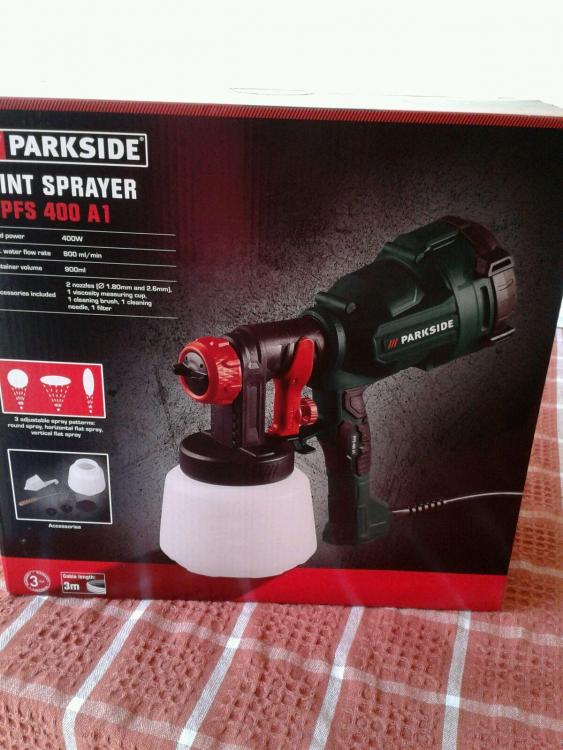 As it turned out, it was perfect for the job.  The stairwell, in particular, is a little confined and with operating off a youngman board balanced between the scaffolding tower and a trestle on the landing, it would have been tricky to manoeuvre the larger machine around there.  The little hand held sprayer did the job nicely and was much easier in the tight space, here: 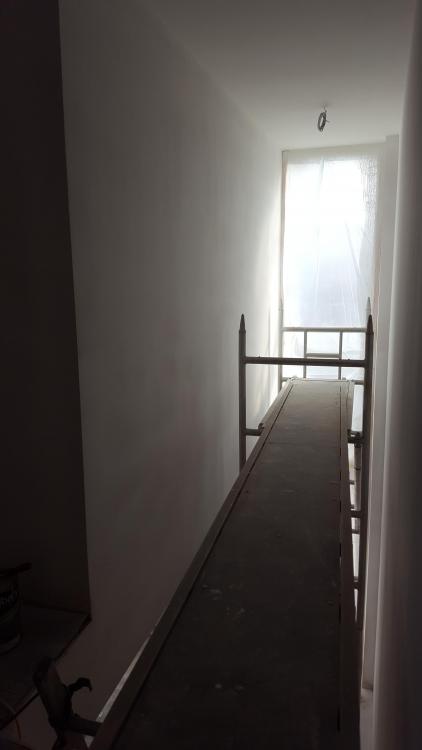 The results from the little sprayer are very different from the big airless system and you get a much more textured finish, but pleasant and perfectly acceptable.  It is a pain having to refill the reservoir all the time, but not difficult.  I poured the contract white into a big bucket and diluted in there, pouring into the reservoir.  I confess that I didn't strain the paint and found that it was fine.  The only time it gummed a bit was if I'd left it open overnight, but wherever there were any splatty spatters I just left them to dry and sanded them the day after.  Sanding was quicker and less messy than straining many litres of paint.  A couple of not very exciting photos of the hallway all masked up and misted: 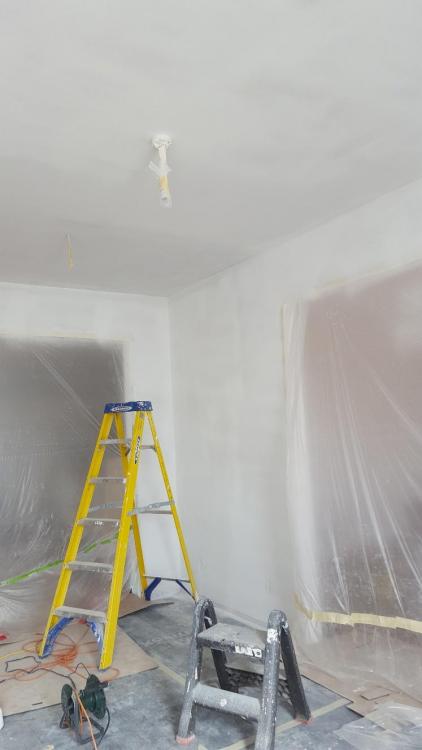 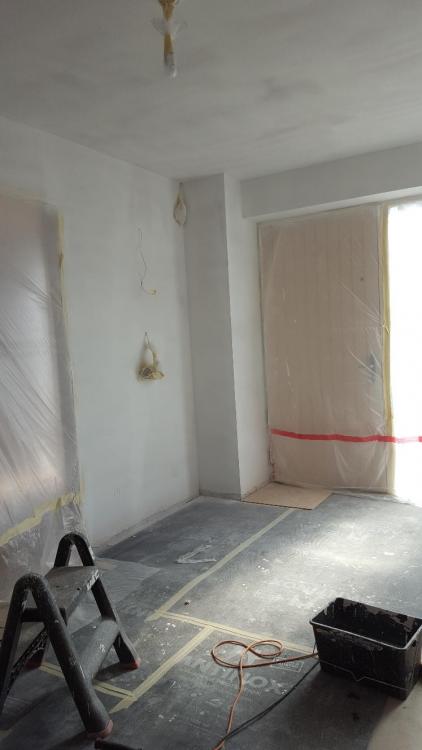 You can see from the masking you have to do that it would be tricky to get this part of the painting done if there were others working in the building at the same time.  I've now put the vinyl coat on these areas too, but I was too knackered to take photos of that as I only finished them yesterday, so that morsel of excitement will have to be eagerly anticipated.  I've also been painting the Howdens primed MDF doors and I'm pleased with how they turned out.  I used a small fine textured roller and eggshell acrylic on top of 1 layer of white primer and very nice they look, too.

Next week, Harry the carpenter (he's much too young to get all the Harry Carpenter jokes, we gave up ages ago) is back so he can get the kitchen finished off as the last of the laminate splashback arrived last week.  He can also get on with some door hanging and then the utility units arrive next week.   The bathrooms and loos need to be done in their entirety, the MVHR unit needs to be installed in the loft and all the plant needs to be put into the garage.  For my part, I have what feels like miles of skirting and architrave to get on with, some paint snagging to do and I need to organise timings on the cladding and brise soleil.  I can't think too much beyond that right now, but I know there's plenty more to do after that - isn't there always?! 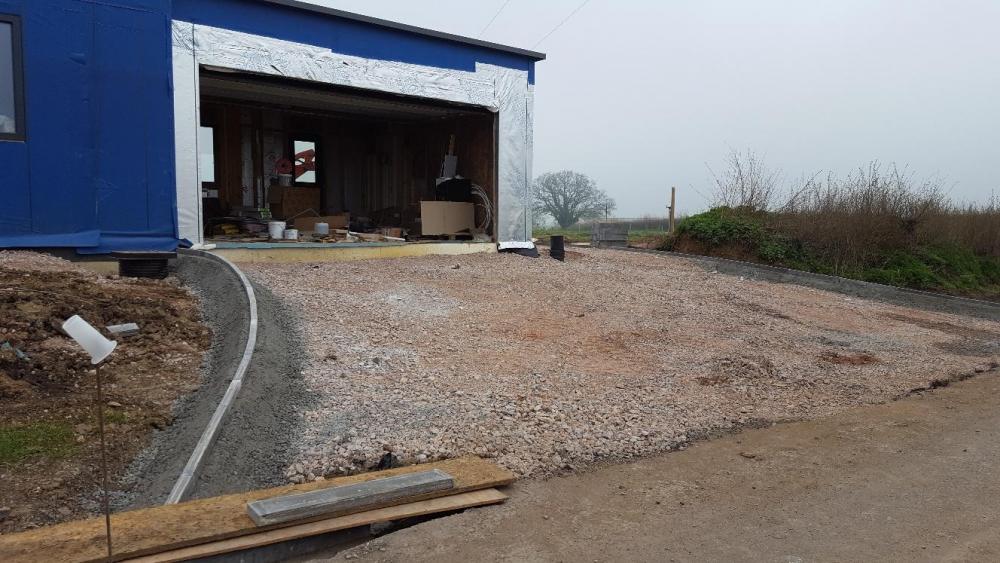 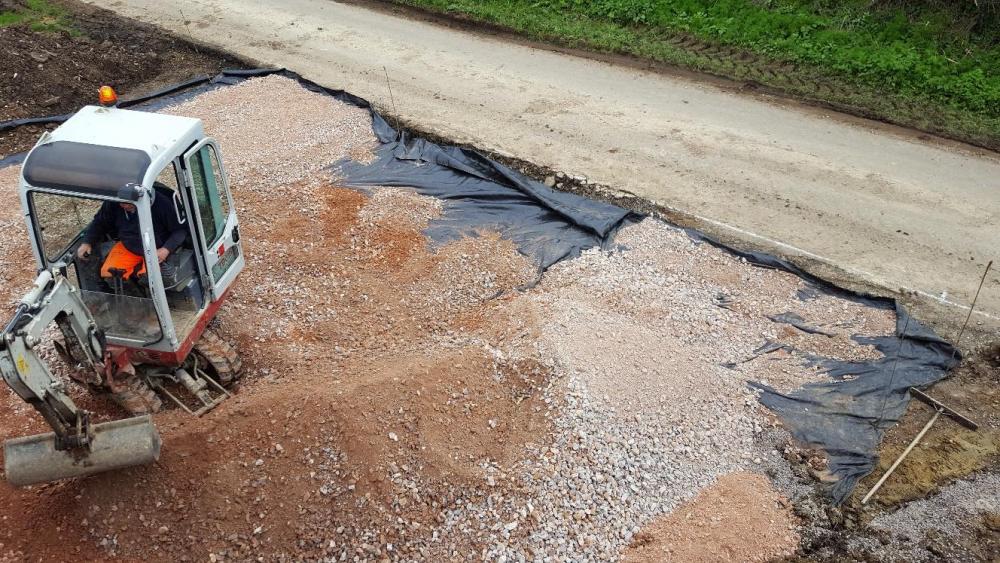 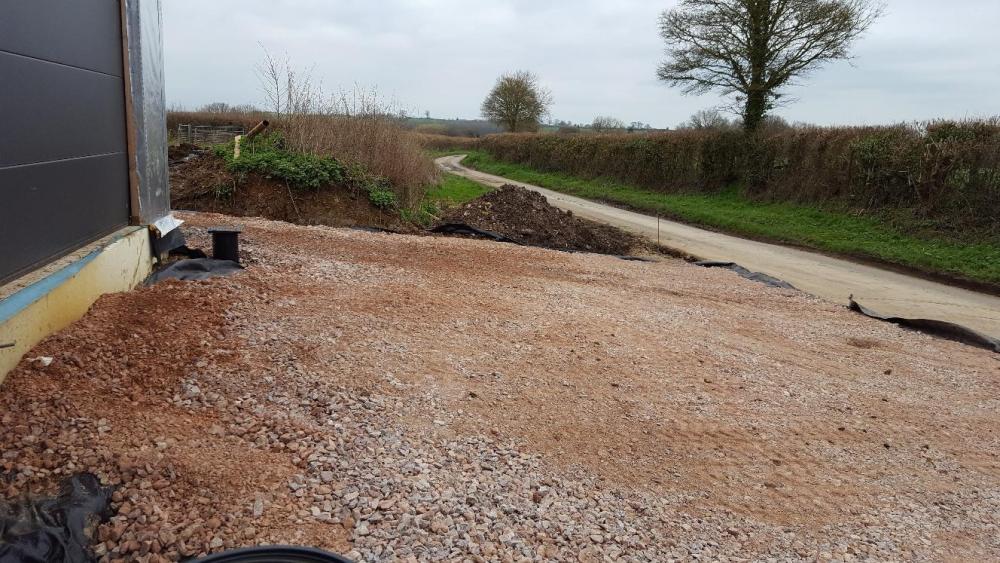 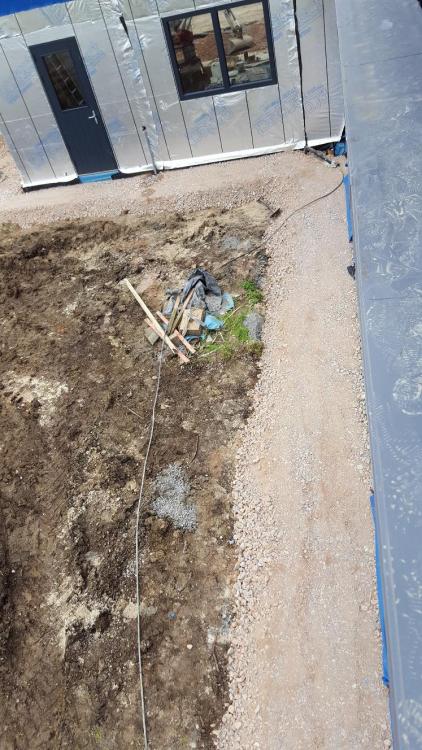 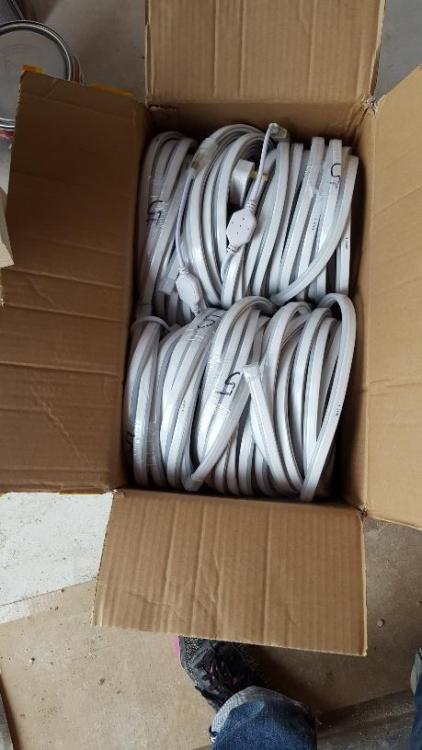 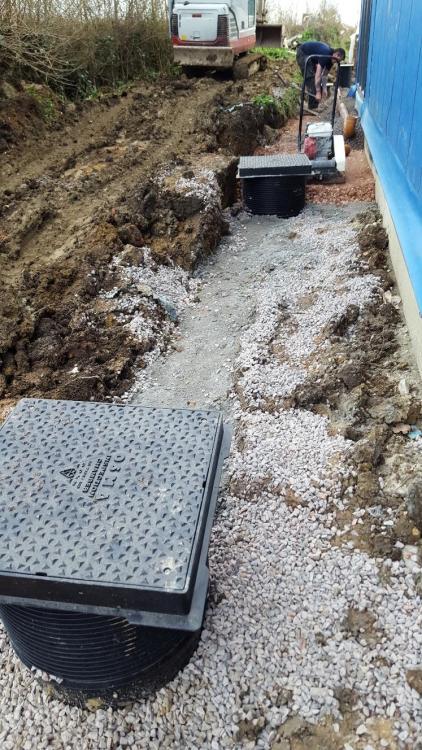 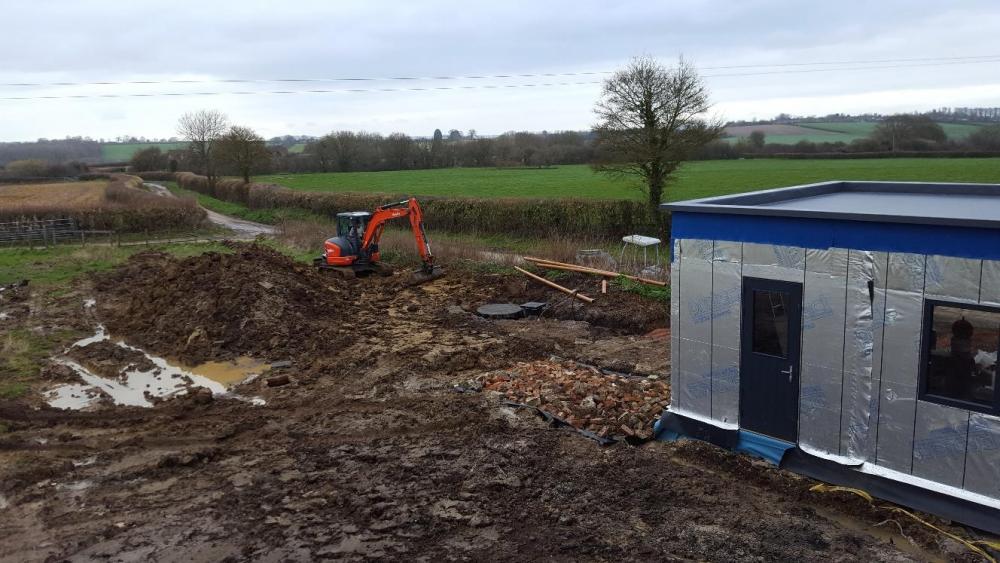 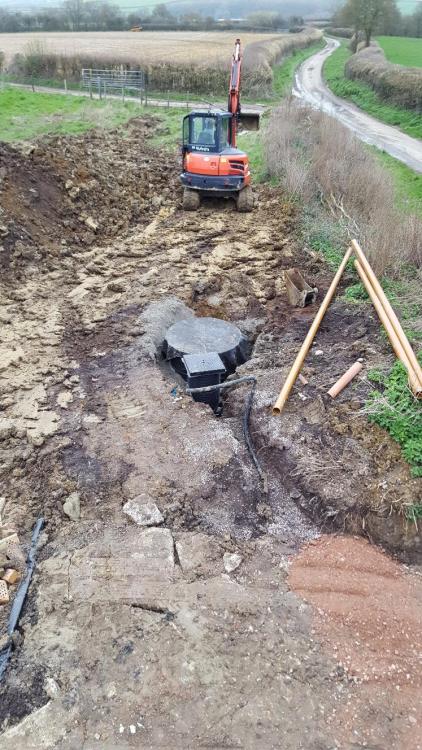