I have finished crawling round on the roof so my attention turns to finishing off a few bits of fascia, then battening, fire breaks and cladding. I left most of the battening to Jeff while I put in the first few bits of wiring for the (almost Blackpool level of ?) outside lights and made the last cuts in the fascia ends so they meet the soffits nicely. This ended up as several hours of work, making what felt like tiny progress while the battening seemed to fly along.

This is the fire break and battening surrounding on of the gable end arch windows. Next job here is to install the insect mesh over the top vents and I'm not looking forward to that much because the mesh is marginally more vicious than the autumn insect population and likes to tie itself into gordian knots. 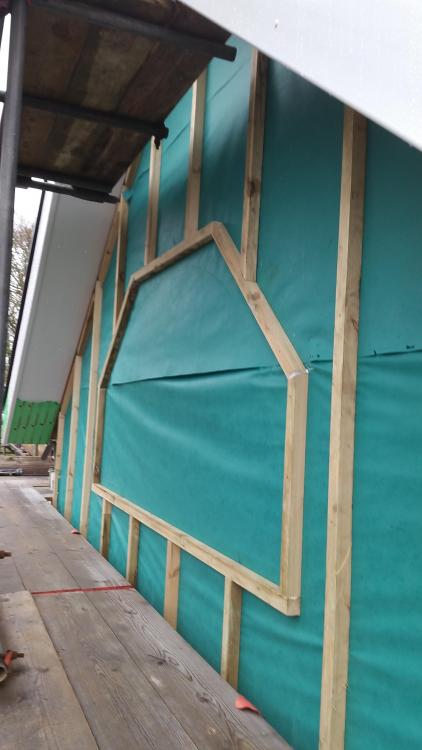 We have had more than our fair share of wind and rain over the last fortnight, so I quickly gave up on the fascia trims because the scaffolding was slippery and I didn't like the idea of gluing plastics when it is likely to be very wet, so I opted to start cladding on the finished battening - it all needs doing! This is the first corner near the front door prior to cutting the excess lengths off. 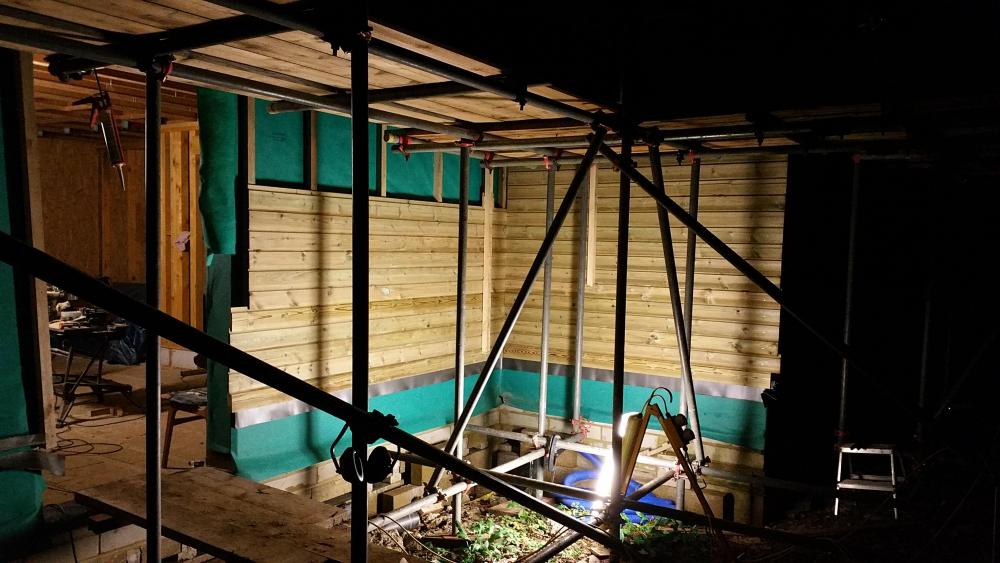 A bit more cladding done. The priority is to get the gables completed, then we can think about getting the scaffolding down because it's at the point where it is hindering almost as much as it is helping. We now have a scaffold tower to finish off the last few jobs when the time comes. It's beginning to feel like a house now. 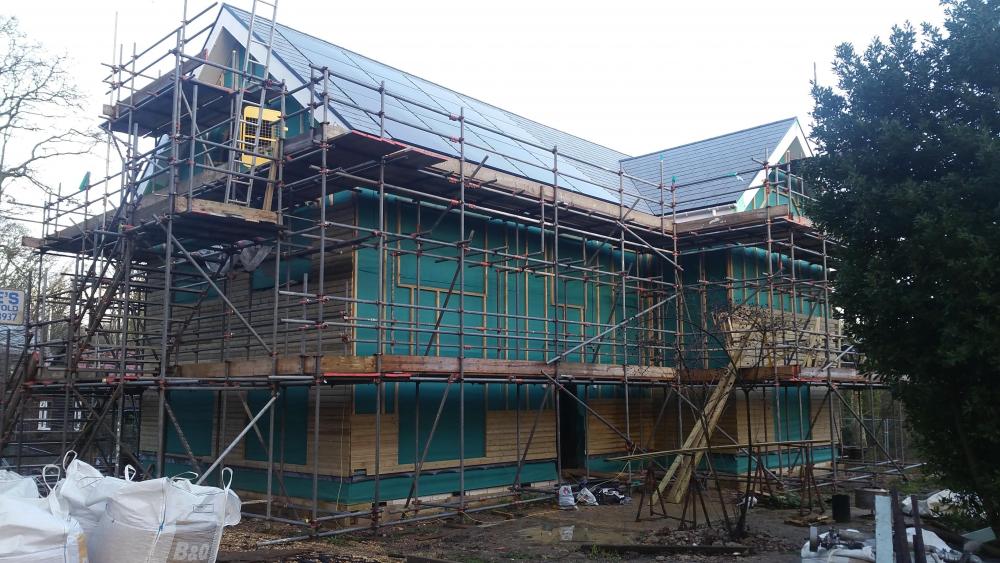 I needed to attend work for a lot of this week but was able to escape when I got a phone call out of the blue from my window supplier. I was in there the previous weekend for something else and they had no news, but by Wendesday my windows were in their yard and they wondered if I would mind awfully taking delivery fairly quickly because they could hardly move.  They agreed to my timescale of "Now is a good time" very quickly. Three round trips later and I had 48 pieces of glass and 15 frames. 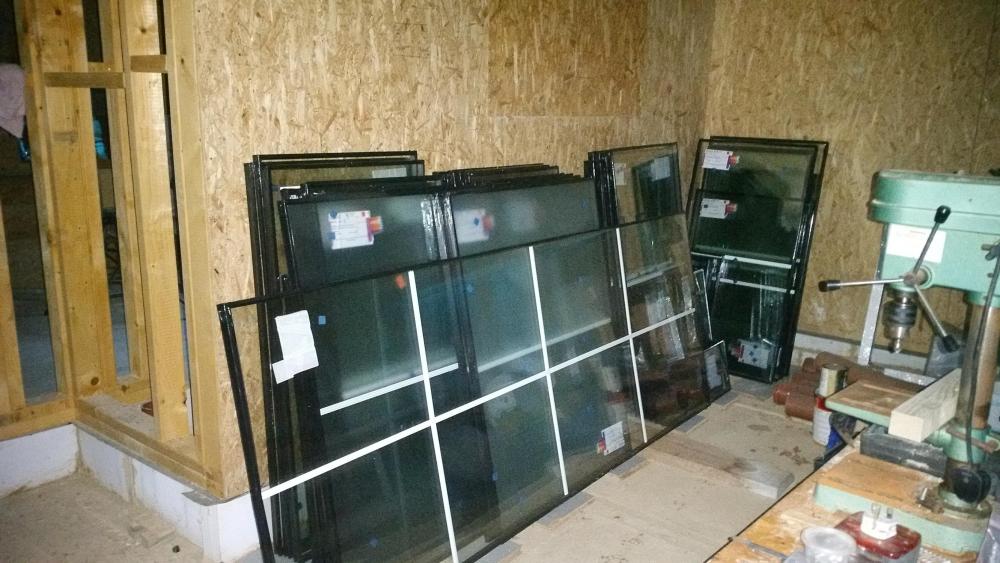 We opted for aluminium framed windows so that we could get away with very thin frame sections as well as having a reasonable performance. They aren't the best performing window on the market, but they are pretty good and the cost difference would never be recovered in efficiency savings.  Besides, there are easier and cheaper ways to claw back the "lost" performance should it be required. 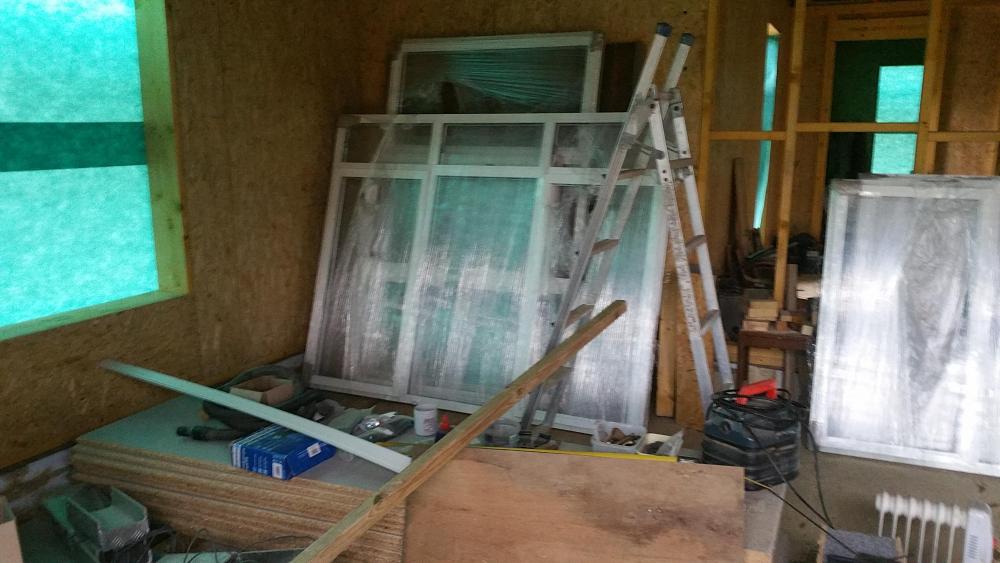 We elected to store the frames near the apartures they are supposed to fill. The old bed frame and furniture is there to try to get some engagement from my not quite teenage daughter about room layouts and colours. It was partially sucessful. 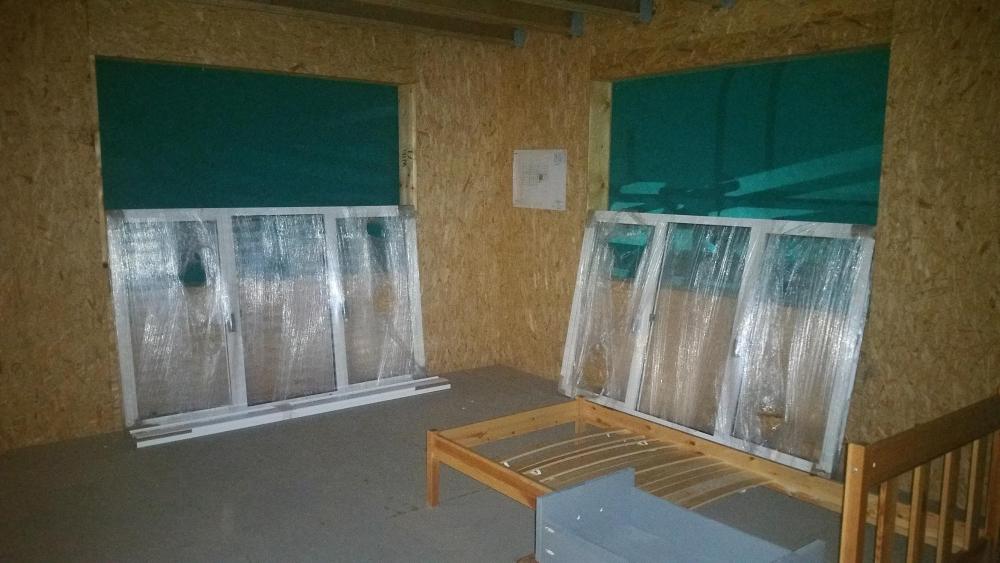 My first attempt at window fitting. I have put in wedges to hold the windows at the right position on the outside of the building and another to stop the frames tipping back so that I can see how the windows are going to fit before I drill holes and get out the expanding foam, in case I need to change anything with my plans. So far, so good... ... Apart from the scaffolding being in the way again. Only 12 more to go. 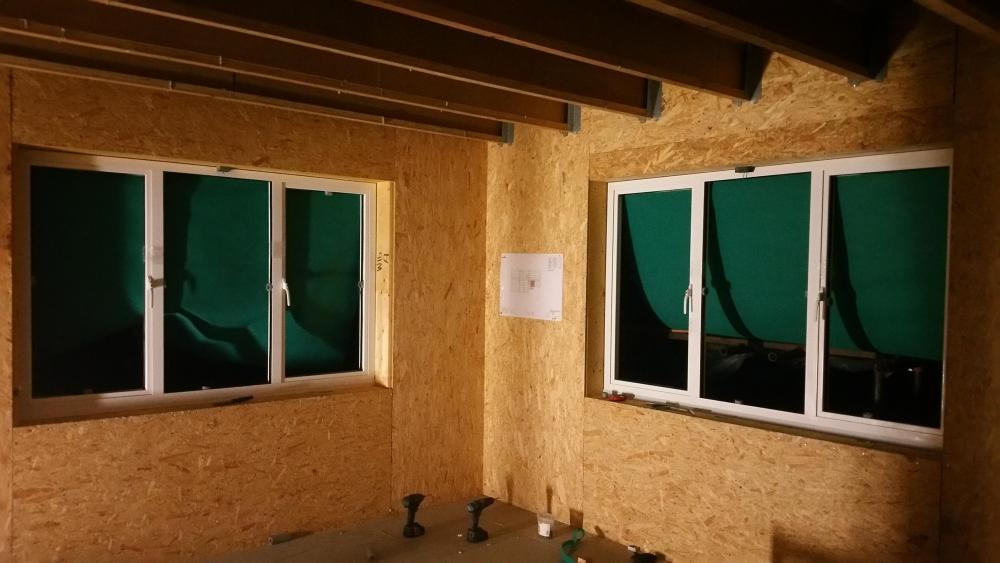