Progress has been made intemittently between the various storms. The guttering is getting a thorough testing some days.

My friend Jeff has returned to site for a week so we have a chance of getting ahead in the inevitable race against the bad winter weather. Some jobs just go better with more people on site... 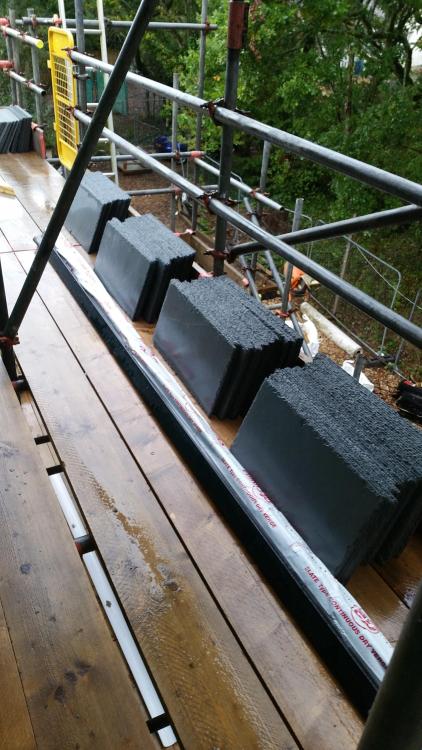 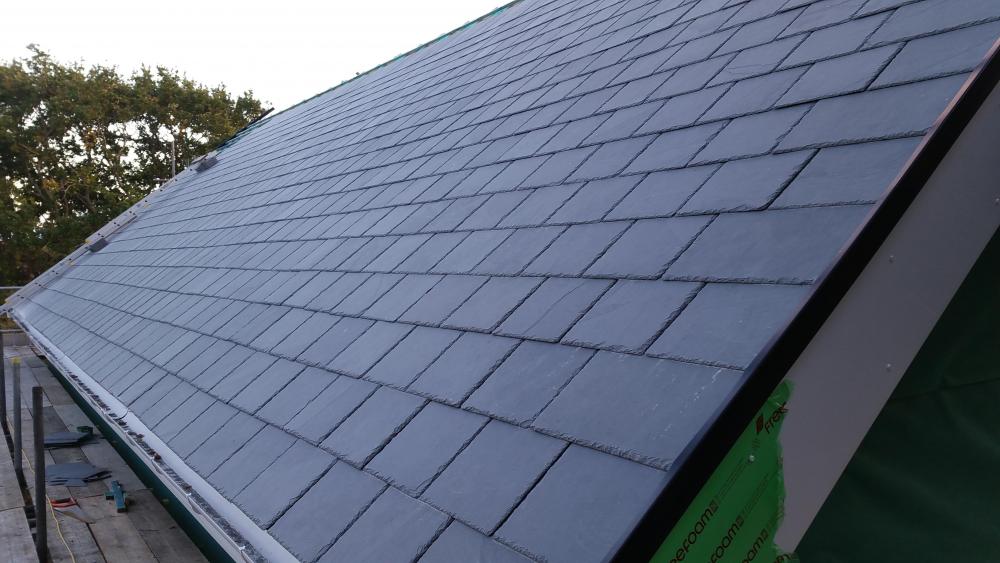 The 15 metre long north roof very close to completion. Just the top row left to go, and we'll do this from the other side.

It's going to meet the fundimental requirements of keeping the water out and staying attached to the house in storms and I think it looks pretty good.  But I would arrange a couple of things a bit differently if I had another roof this size to do. Lessons learned for the garage! When all said and done, it's natural slate so there will be imperfections and differing sizes. (I am noticing similar issues on other natural slate roofs the more I look now!) The trick would appear to be to manage them in the grading process so the right slates can get to the wielder of the hammer at the right time - I think a few trapezium shape slates slipped through and we didn't mix the crates thoroughly enough, and errors inevitably accumulate on such a large length of roof. 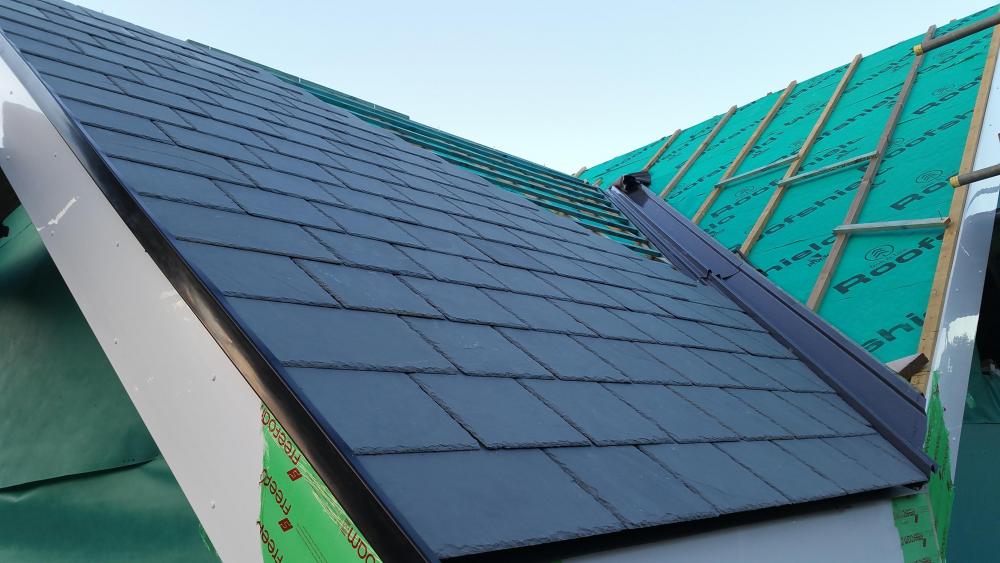 Small sections are much easier! A lot less distance for errors to catch you out. We just need to remember to attach the top valley section properly before putting more slates on! 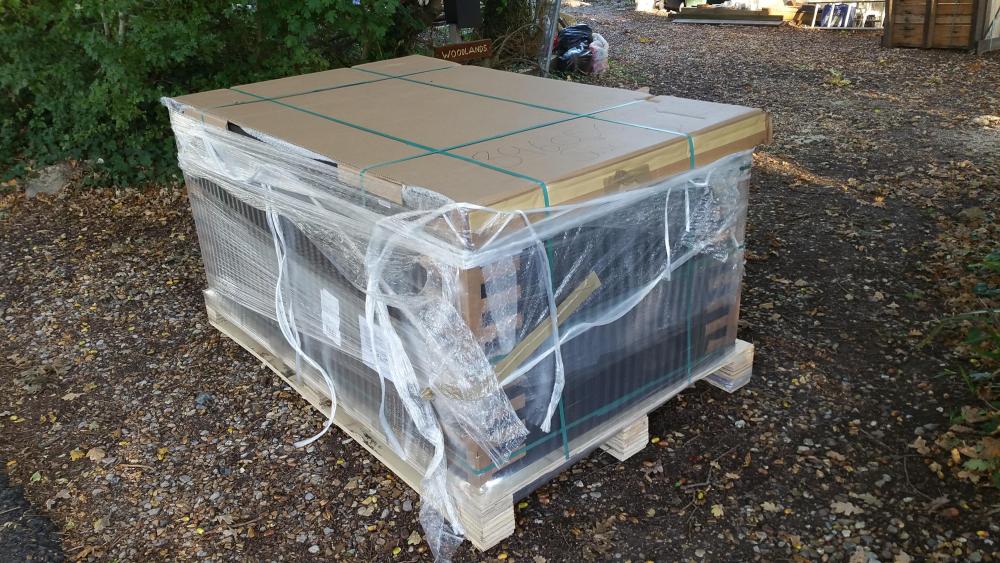 This turned up on Friday along with another pallet of parts, a lot earlier than expected. (It's virtually unheard of to get deliveries ahead of schedule here and I'm really pleased because it gave me a weekend to deal with the contents.) I now have 6.6kW of solar panels, some GSE integration trays and several piles of electrical parts stashed in the shed. 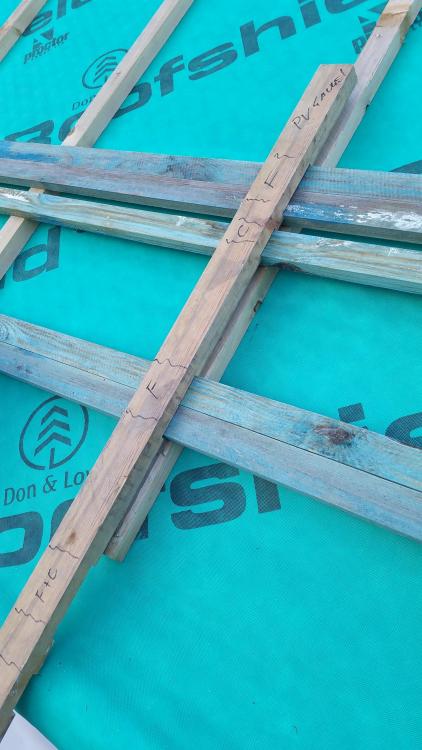 I made up a couple of gauge blocks to set up the battens for the GSC trays. This is the first test before trying to get them to the right height on the roof. It's a lot easier when the whole of the battening assembly moves as one piece. I talked the whole GSE battening thing through with my very helpful BCO and he's comfortable with me doubling up graded 50mm slate battens to suit the GSE spec. I also plan to alternate fixings into the pairs of battens so that loading is shared as evenly as possible. 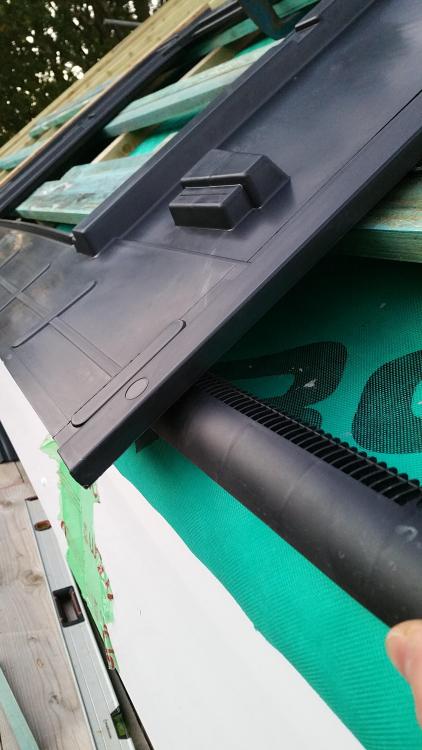 The tray is sitting a little low here. This is when I started to question the measurements in the GSE document - I found that GSE have updated their documentation since I downloaded the first battening plan, and the measurements are all different between the two versions because they take the reference from the other edge of what they term the "reference batten". It took me 2 hours of swearing and cursing before I noticed this. 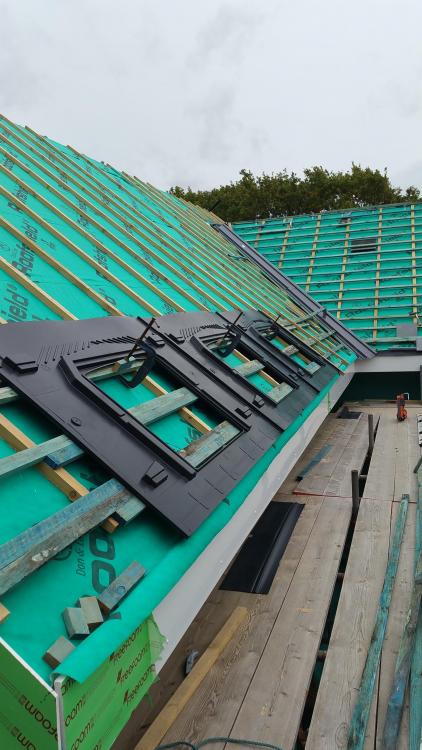 And when I used the latest document measurements, it all works out! The first three trays balanced in place with a lot of G clamps. It seemed a good idea to go down to the eaves with the panels - it creates enough room for the 5th row on the top and allows it to have a meaningful few rows of slates at the top. Otherwise I loose 1.2kW of panel or have to cut nearly every slate top and bottom. The instructions were clear that it is possible to install the trays this way, but were a bit light on exactly how the bottom flashing works on a vented roof. Got to have something to work out in the week in between puzzling through the hard maths problems at work.