....what the weatherman says as things didn't go quite to plan.

It's been a hellishly busy couple of weeks since I last posted and it feels like far longer than 2 weeks, as I'm sure anyone who has had a leaky building will sympathise with.  I was feeling very pleased and relieved 2 weeks ago as everyone was on site and working away and it really did look like I would just sneak in before the weather broke.  Had everyone been where they should have, I would have just made it but the flat roof firm let me down rather badly.  They had been fitting in dribs and drabs of the work when they could over the last couple of months but the bulk of it was always scheduled for the last week of October onwards and I had an email from the head man at the firm confirming that the guys would be on site on 29th October and remain until the work was complete.  Sadly, that wasn't the case and they were on site for one week and then announced that they were off to another job the week after.  I expressed my dissatisfaction and said that if things turned nasty with the weather, I wanted them back because it was pretty clear that there was still a lot to do before water would stop coming in.

The following week, the weather did indeed break, and it chucked it down, much of which came straight down into my building.  I rang the flat roof boss and told him that I needed someone on site the following day (due to be dry) to get back to things as taking them off my job and leaving the building exposed wasn't acceptable, so he said he'd send someone over the following day to see what they could do.  I had thought that they would stay for the day having come all this way but it turned out that they had quite literally just come to see what they could do.  Not actually do it, but see what they could do then go on.  WTF!!!!  So, in the absence of any word from their boss (tried to call, voicemail) I set them to work and said that I expected them to be on site for the rest of that day.  The boss finally rang just after 10am and we had a row - he saying that the other job they were working on was more important than mine and me accusing him of broken promises and wondering how my money was worth less than anyone else's and my building flooding out being unimportant.  Now, I'm not one for stand up rows with anyone.  The best victory is by far the one that you don't have to fight for and certainly not have blazing rows but I'm the kind of person who, when someone says that they will remain until the job is completed, I believe them.  Particularly when all the follow on work from MBC is dependent upon having a dry building to work on and I was not going to have a dry building at the end of this, so I was quite prepared to make some noise over this.

So, 2 weeks later and we seem to be settling down but not before more drama ensued.  In their efforts to shore things up during their day on site, the flat roof guys tanked my east facing balcony.  There were and are a couple of lovely big drainage holes through the parapet wall via which water can freely exit, but for some reason they thought it would be a good idea to put the membrane over these.  WTF!!!! Again!!!!  Thankfully, because MBC were on site, I went over to site on Saturday.  We'd had some major weather and storms the previous day and very heavy rain.  As a result, I had a paddling pool outside my bedroom window that was lapping in under the French doors.  For once, words fail me, they really do.  Armed with bare feet, rolled up trousers and a stanley knife, I negotiated the scaffolding beams and re-opened the exits and rammed a couple of drinks bottles with the ends cut off into the holes to keep them open and drain the water.  Ever seen Niagra Falls?  It was a fine impression.

Here are a couple of photos of the water that came into the lounge area from the parapets. 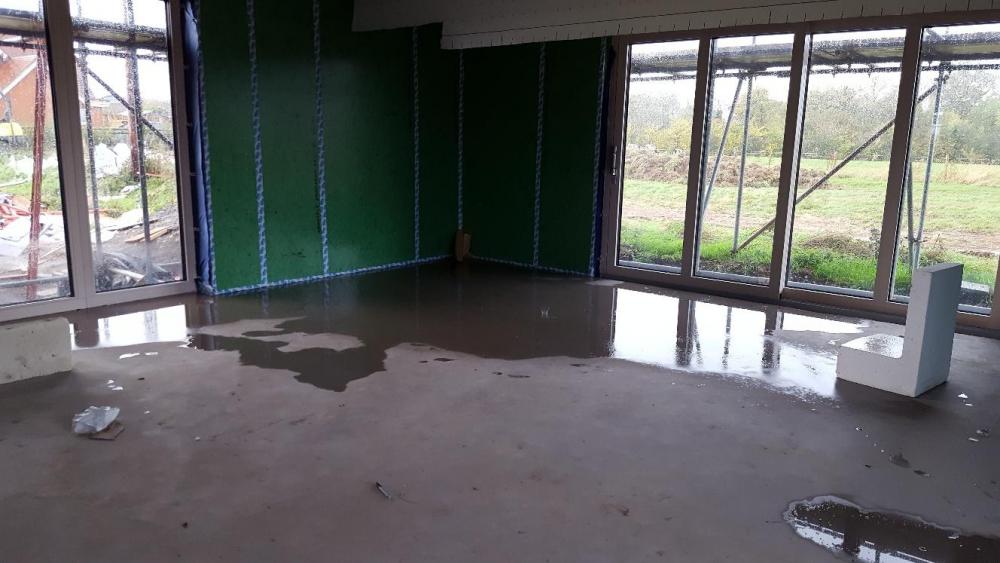 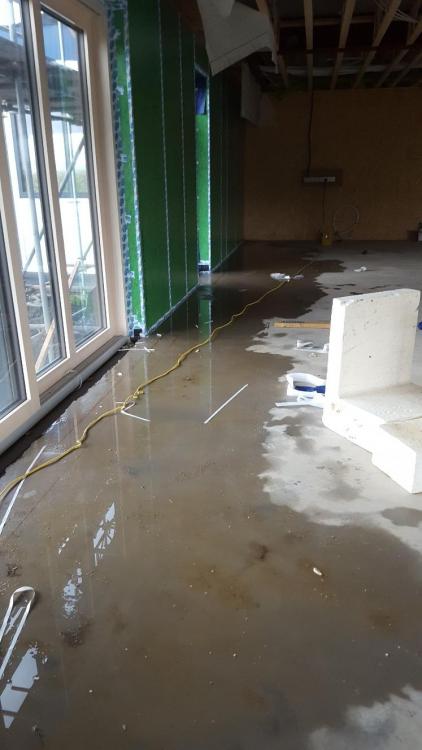 I vacuumed up all the water from inside the house and put a couple of oil filled radiators in the place to get some sort of drying process started off and it did a bit of good.  Come Monday, words were had with the guys now back on site as it could have been disastrous if I hadn't been there at the weekend and the upstairs would have quickly flooded, and the downstairs more so than it had already.  They're now working on the last of the flat roofing and the gullies behind the parapets and the house is drying out.  MBC have been in and done what they can, which is most of it, but we need to let one side of the parapet dry out some more before they put the celotex up there - we should be good for Tuesday next week which is when Darren will be back and the airtest will be done that day, too.

It's such a pity that the flat roof firm let themselves down so badly on this.  The guys on site are very pleasant and with the obvious exception of the tanked balcony, their work appears to be of a good standard but school boy errors like this aren't good enough.  I have my reservations about the boss of the firm who, given his experience in the industry and construction in general, really should know better than to tell someone one thing and do another completely, especially when there is follow on work booked on the strength of their given timescales and bad weather hasn't adversely affected things.  To then try and shout a customer down for asking for what was offered in the first place is also incredibly unprofessional.  I will need some follow on work done on the balconies to put another surface on which will allow me to put decking down but I'm reasonably sure that I will go elsewhere for that.

This is the east balcony, with two bedrooms leading onto it.  The rumpled up stuff at the end is the polythene covering the garage roof. 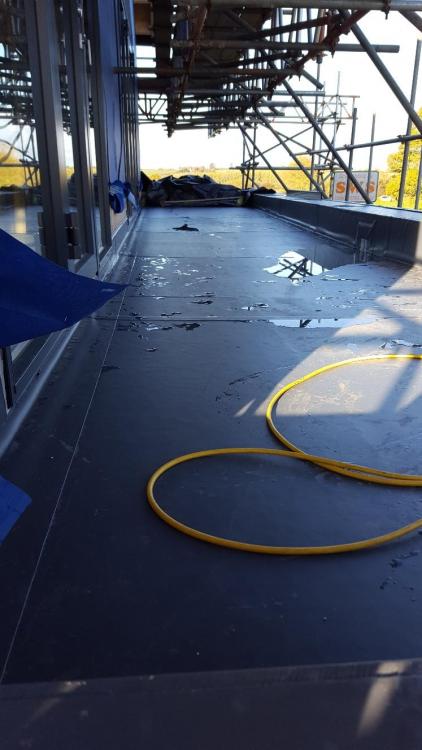 And here's the work in progress of the parapet gullies being lined with membrane.  The guys got on okay with this one but I gave some feedback to the architect about the same construction on the north face of the house.  This was because when the guys came to line it, they were significantly slowed up because the width of the gully was too narrow to get a fixing tool into to attach the OSB upstands to.  Looking pretty is all well and good, but only if you can actually build it.  They managed, but probably lost about half a day because of this.

Moving on from the flat roof but still on the subject of water, I'm still getting water ingress from under my windows as well and, if anything, more than I previously thought as it's affecting 3 windows not just the original one.  For all that it's distressing seeing water coming in through the building because of my roofing difficulties, in many ways it's not all bad because it has highlighted the poor seals under the windows that I wouldn't have otherwise spotted and had the opportunity to get put right before the building is complete and kitted out.  That would have been a horror story.  I do realise that the building isn't going to be fully watertight until the cladding goes on, but the issue is that the water ingress of the windows is from underneath, not around the sides or top and so there is something defective about the way they have been sealed on their bases and this needs to be addressed.  I have a team due on Thursday so I shall be interested to see how they deal with this as it needs to be fixed before next Tuesday at the latest.

One thing I have learned over this last week is how useful a wet vacuum cleaner is to have around the place.  Mine is 30 years old but still giving great service - it worked very hard last weekend.

This is the south bedroom window, but the picture on all the other multiple pane windows upstairs is similar. 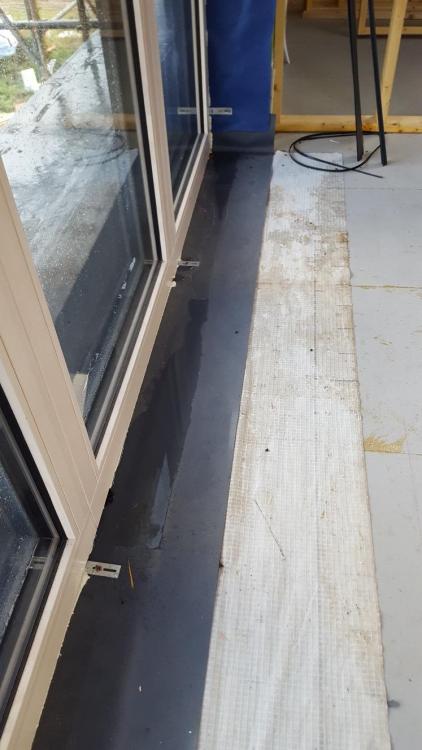 Here endeth my watery post.  I feel a little glum looking back at these photos, I suppose because it's all still so fresh in my memory and there is something really horrible about seeing water on the inside of the building.  However, all is now in hand until the next crisis and I'm off to do another post on all the good stuff that's happened over the last 2 weeks.