....if the weather man says it's raining!  So goes the old song and me, too, by the end of this week.  The roof itself has been watertight for a couple of weeks now, but there was still significant water ingress from the gulleys hidden behind the parapets formed at the top of the ground floor.  However, my flat roof guys have been back on site this week and are working hard.  Today they were finishing off the long, east facing balcony and also moving onto the south facing parapet; they will continue around the building and should have the main part of the house all finished off if not by Friday, then certainly early next week.  This is a great relief as even though I know that the building would dry out, there is something deeply distressing about seeing puddles of water lying on the slab after rain, despite the main roof being on, so I shall be very happy to have this part of the build completed.  Photos of the gullies and balconies to follow later this week.

Stepping back to last week for a moment, some of the window snag list was ticked off, primarily the shattered panes of glass.  One was in the south facing ground floor lounge area and the other was a unit in the north east bedroom.  Norrsken were back exactly when they said they would be and got the main jobs completed so that things are set for the return of MBC.  The remaining snag list are a few adjustments to the windows, for example where one of the lift and slide windows is too tightly fitted against the seal/brush and the frames rub when it's opened or closed, and then a few cosmetic issues such as shallow dents in the frames.  We've agreed to complete the rest of the list once we're getting into second fix rather than get in the way of all the frame completion and first fix work.

Last week also saw the return of Darren from MBC to fix my wonky wall, for which the solution was low tech but effective.  A sleep deprived but determined Irishman with a very, very large hammer who was prepared to beat the crap out of a steel beam, and that's precisely what he did.  So the problem wasn't so much the wall above the window, but the section that housed the apex steel that sat above the window and that, it's now been decided, has a kink in it.  The wall above the steel section and the one below it are both plumb but the inverted V-section above the window isn't due to the kinked steel inside it.  I'm assured that everything is structurally fine and that there's no danger of anything shifting in a detrimental fashion and after Darren did his stuff the top of the triangular window section is now only 3mm out, where it started at 12mm and more further up.  I can easily live with 3mm and it will easily be lost in the cladding.  There is now a kick on the inside, but Darren will put some packers behind the service battens to make sure that the final internal wall is plumb for boarding out and everything else that comes after.

And so back to this week, where the first few days have all been about activity on the roof.  As already mentioned, the flat roof guys were back on Monday and also back were the solar PV guys.  The solar guys had to start by removing the optimisers from where they'd previously left them on the roof as they are all going into the loft space.  The idea behind this is that the solar panels themselves are highly unlikely to fail but if any of the optimisers do, it will be an expensive job to get to them to make any repairs.  It would involve dismantling part of the roof as well as expensive scaffolding to gain access. Instead, the cables have come through a penetration in the roof and the optimisers will sit in the loft space along side some MVHR equipment, meaning that things are far more accessible in the future.  The inverter will be in the garage and the cable has been run down along the roof, going through the parapet and through the garage ceiling, into the garage where it will live with all the sunamps and other kit.  This is the route it's taking, to the side of the roof window and underneath the membrane that will line the parapet gully and, eventually, the garage roof. 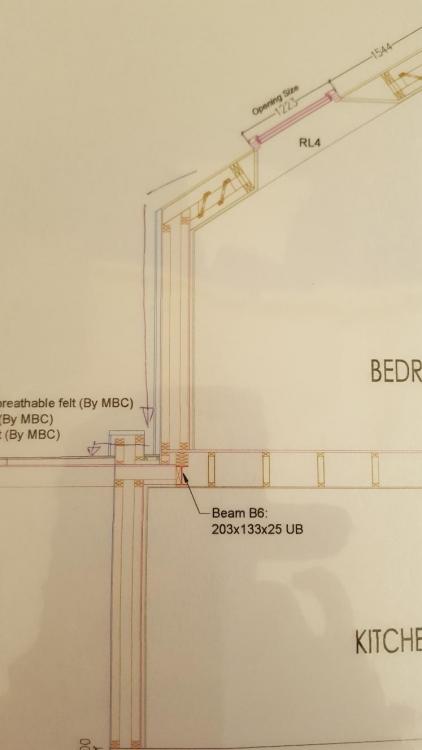 My velux windows arrived last week, which was another relief.  My roofer, Dylan, gave me a call to confirm that they were in and the days that his team would be back.  We'd already agreed that they would be on site on the 30th to co-ordinate and work around with the solar guys and they all worked really co-operatively, as they have done all along.   I'm biased, of course, but I think that my roof is looking really great and the solar panels are pretty smart looking, too.  Here are the panels from the other side of the flat roof over the stairwell. 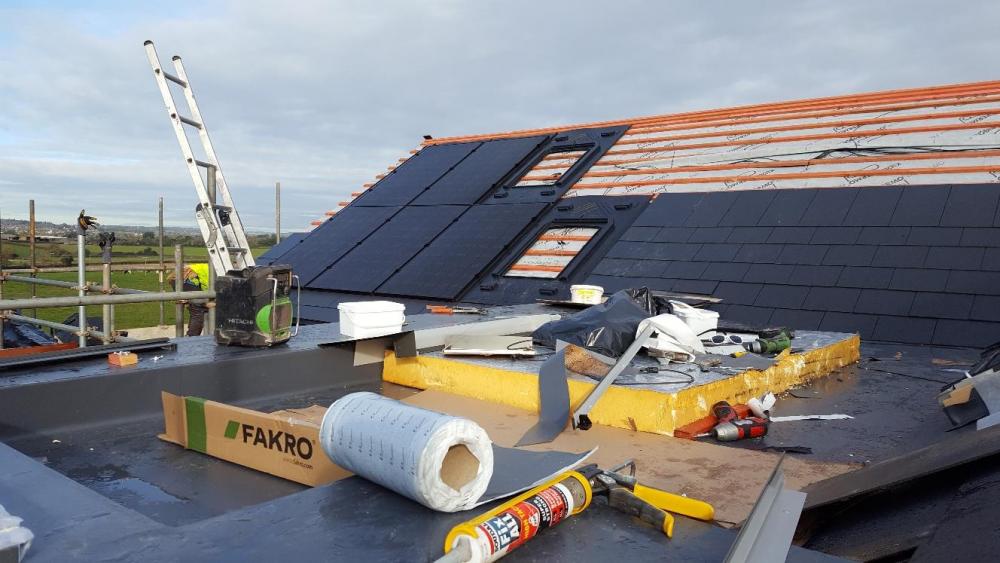 And a closer view of the trays and panels. 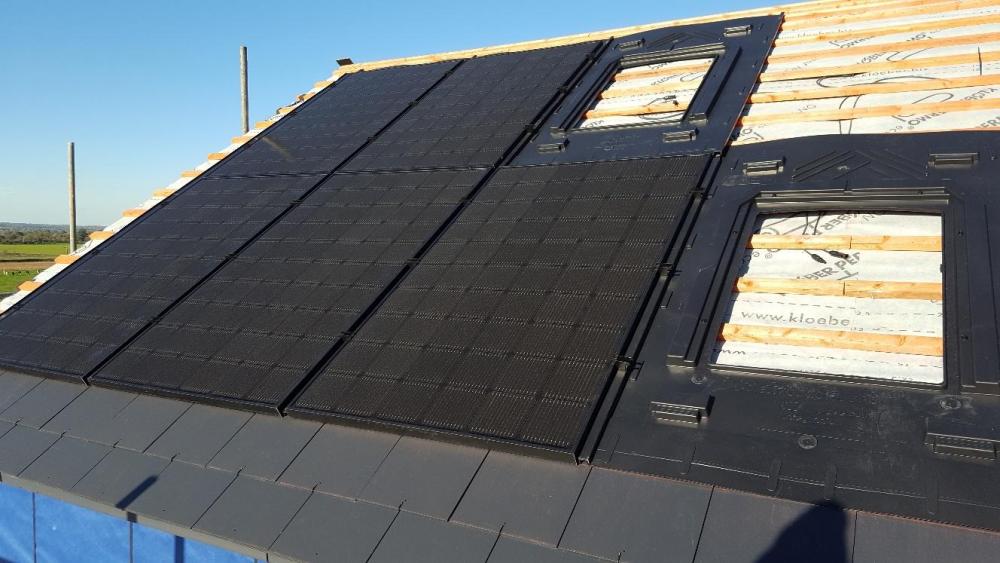 This is the velux window that's over the shared bathroom.  It's very low down coming onto the flat roof, but Terence and the other roofers, Pat and Mike, had already discussed this and decided how to solve the potential issue by using some more membrane and glueing the s*&t out of it all. 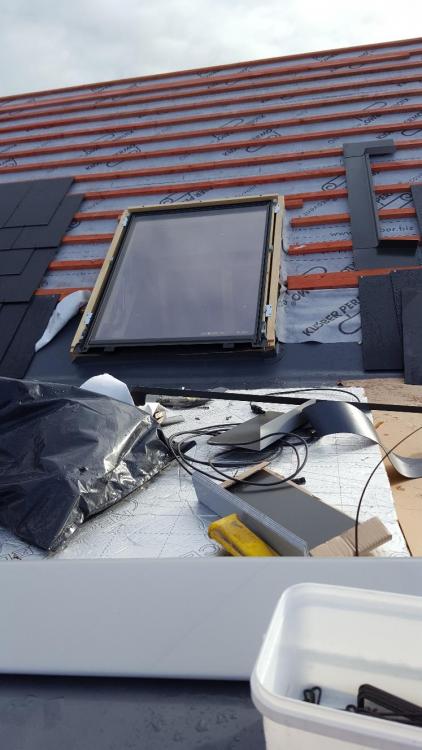 This is the same window from inside.  The light from this will be the only natural light source in the bathroom once all the walls are in place, so it's good to see that it floods in from its west facing orientation. 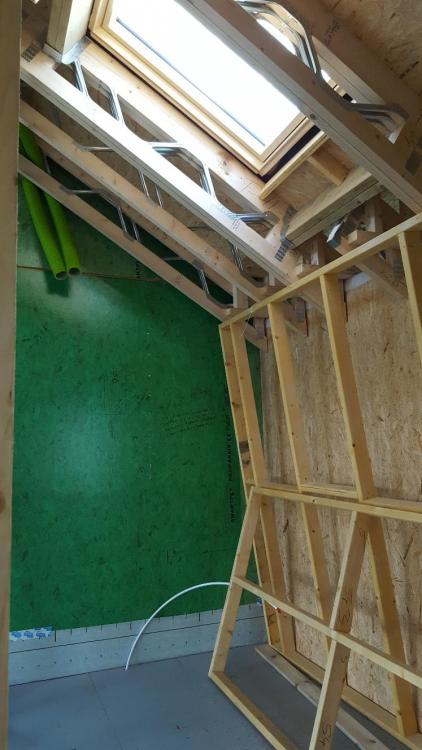 We have another 2 velux windows, one is in the already well-lit south east bedroom, which I'm claiming for my own room to do stuff in, so I'm delighted to have it full of so much light.  You can also see the prep on the balcony with the membrane being put down.

The other roof window is the north east bedroom which will benefit from the additional light given its aspect.

Here's a pic of the guys putting the trays into position on the main south facing roof.  The pole that's in the foreground of the picture is the one that until recently carried the electricity supply cable.  That has now been buried and back-filled today and Openreach will be around on Friday to remove their equipment so I will be able to dispose of the pole in due course. 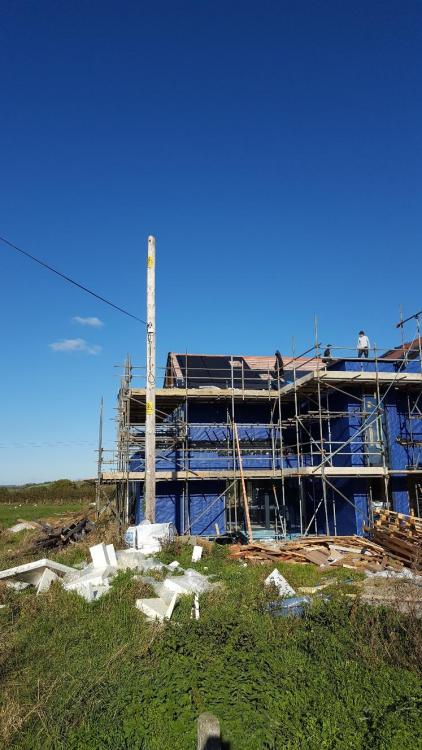 This is towards the end of the day when most of the panels were on and the slates had been put around them. 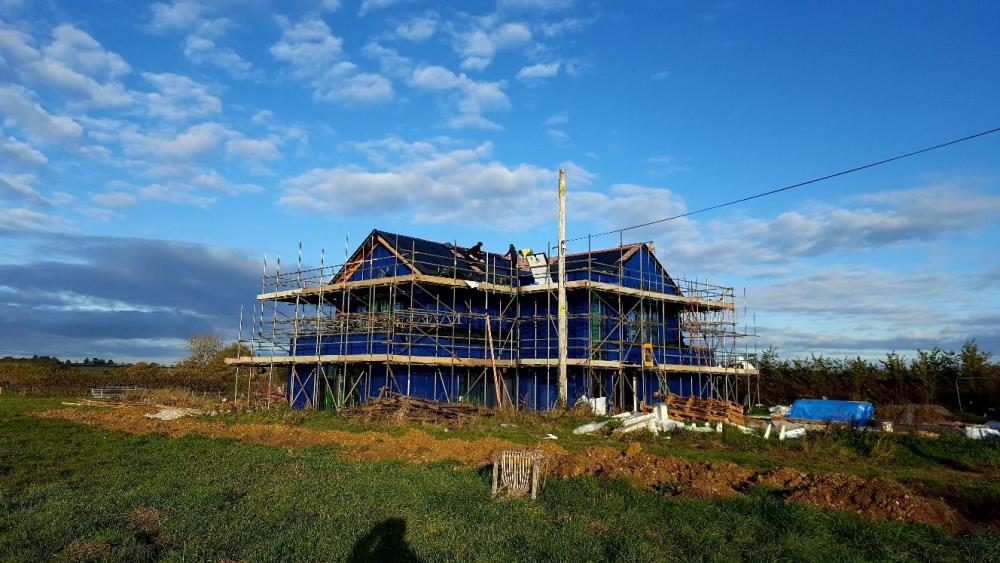 There's plenty more work to come this week.  The flat roof team are continuing and the pitched roof team will be back on Friday and possibly early next week to finish everything up there.  My groundworker, Keith, is on site now as well, and we're moving all the shrub and hedge related debris from earlier in the year.  I'm currently thinking that bonfire night seems an appropriate time to light up, so I may have to buy some sparklers for the occasion.  My fire rated door was delivered today from Enfield Speciality Doors and my neighbour, Drew, will be installing that for me.  He works in construction and having seen the tidy work he's done on his own place, he'll be doing a fair bit of internal work for me as well as, possibly, the tier cladding on the outside in due course.   It's worth noting that I paid a premium to Enfield Speciality Doors to jump the queue in their production schedule to make sure that I got the door in time for the return of MBC.  It's the one to go between the utility and garage so it has to be in before MBC return and I was prepared to pay an additional 10% to make sure this would happen.  I was chatting with another BH member recently and it seems that fire rated doors really are tricky things to get hold of, let alone within a reasonable timescale.  If you also want one that's insulated and looks good, be prepared to take a few months over this, assuming you find anything.  I'm fortunate as mine is only between the garage and utility and doesn't need to be pretty.  I may add extra insulation later but, for now, I just needed the fire rated door.

Soil pipes and other bits will be sorted out  as well before MBC hit, then we can really take the brakes off and go at first fix.

Yesterday's buzz of the week was the Hercules. 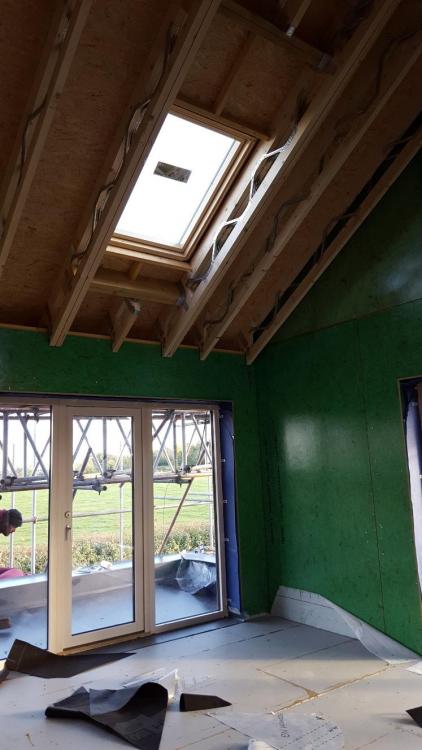