....is how my brother in law accurately described the state of the build now when I Whatsapped him the picture below, taken yesterday afternoon. 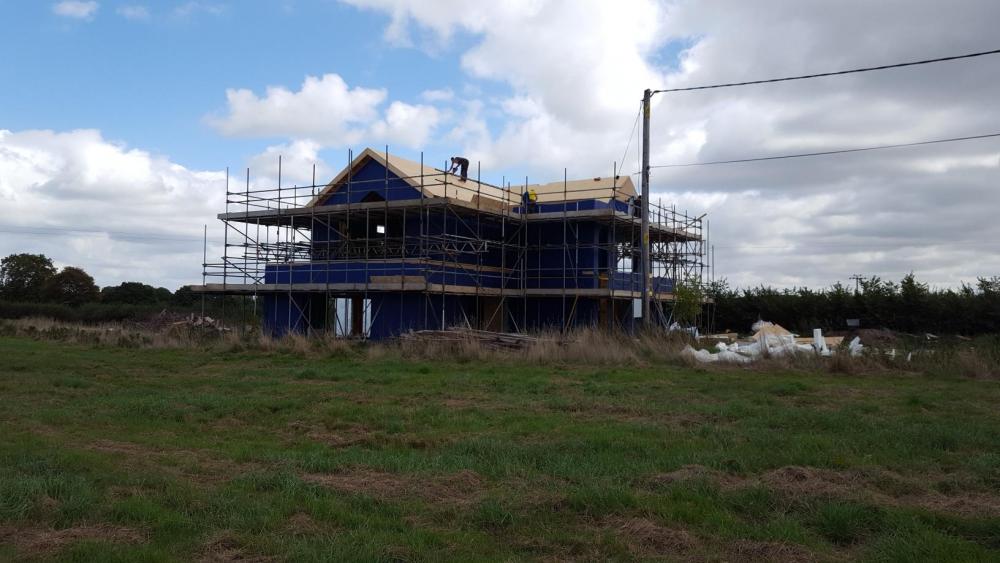 As you can see, MBC have been at their blitzkrieg style building speed again and this morning I arrived to find my roof all covered in membrane and battens, too, and MBC noticeable by their absence.  Actually, it's the silence that you notice as much as anything.  There were about 7 in the team over the weekend and when all the nailguns are going it does sound either like gunfire skirmishes or lots of firecrackers going off.  Either way, they were true to form and really shifted.

This is the view from down the lane and you can see the membrane and battens all in place.  Personally, I think that this is an interesting photo because it shows how, despite being a large building, the view of it from the lane is much less prominent than one might expect, due to the angles of the gables and pitched roof.  The part that looks like it's covered in tin foil is the garage. 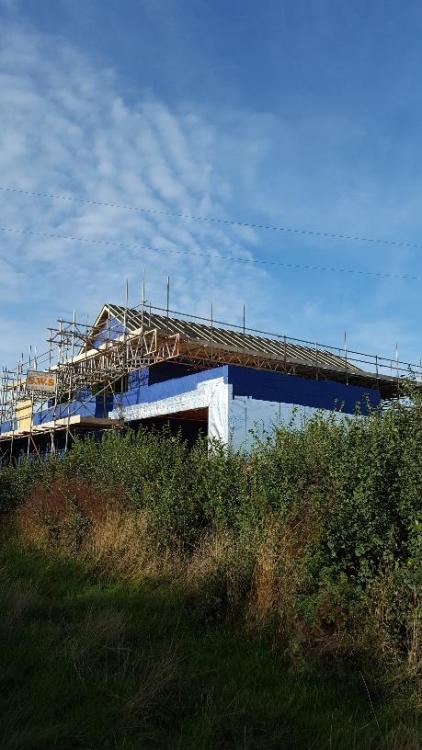 Here's a more distant view from down the lane, taken before the membrane went on. 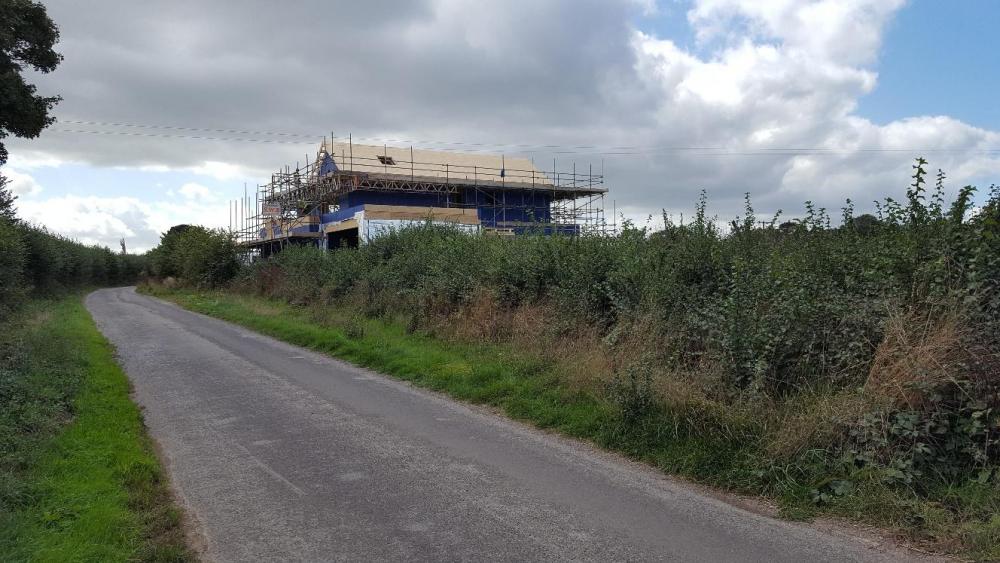 Of course, in order to get the roof on, all the posi-joists needed to be put in place and this was being done over the weekend.  My neighbours work in construction and have been fascinated by the process of the MBC build, which is all very new to them.  It's great having neighbours who view the construction with such enthusiasm because instead of complaining about noise and disturbance about the teams and working late/working weekends, etc. (remember Peter powerfloating the slab till 12.45 am?), they gush about how hard working they are and give me full update reports on what's happened in my absence.  Lucky me!  And thus, according to my local spy network, there were 9 team members working on Saturday and there were 7 on Sunday.  No wonder I came back to an empty site today.

I was away from the site on Friday, dropping hubby off at Luton airport at 6.30am and then on to have a brief bit of R&R with a girlfriend in Birmingham before heading back south.  On Friday, my temporary staircase was delivered from Howdens and MBC added a couple of extra treads to the bottom to bring it up to the necessary height.  For £120 + delivery (and VAT, if applicable), it's a very useful bit of timber to have. 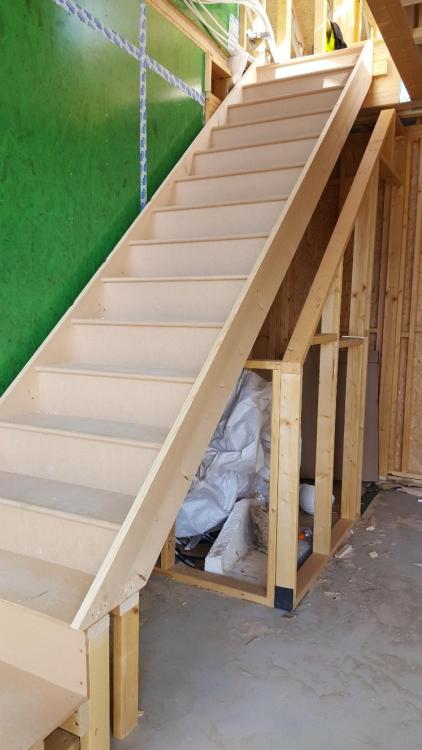 Most of the stud walls are up now; there are only 2 that need to be put up when MBC come back, both off the hallway and have been left out for the time being for logistics.  This photo is looking from our bedroom into the en suite and through to the main guest bedroom. 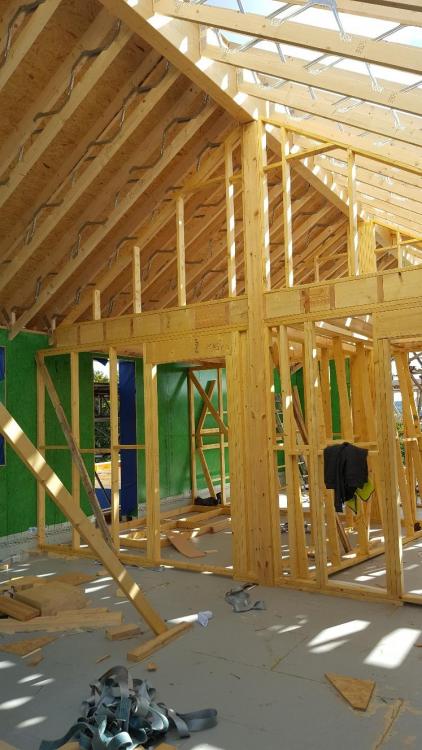 We had a lucky save on the stud walls, not in financial terms but layouts.  The architect had specified that each of the bedrooms should have a partial stud wall just inside the door and centrally located, almost making a corridor as you walk into the room.  We were really unconvinced by the idea at the time, but went along with it as it can be hard to accurately imagine these things before the building goes up.  When I came to the site on Thursday, however, it was clear that they would have been awful for a couple of reasons.  Firstly, having gone to a lot of effort and expense to have bigger rooms, these immediately sliced off 25% to 30% of the room and made you feel like you were being pushed up against the window which, by the time a large bed is in the room, is exactly what would happen.  The second reason is that because of the really high vault in the main bedrooms, 4.7m, having a run of about 3 along the floor from the partial stud wall the the window meant the proportions were really off and looked terrible.  Still, nothing ventured, nothing gained, and these weren't put in and are now a nice load of scrap or surplus timber lying around.

The matter of the stud walls does, however, emphasise the value of being on site most days as had I been absent, they would have been put up according to the plan and I'd have regretted it bitterly.  There have been many instances like this where what seems like a small, or even trivial, decision or alteration at the time which is quick and easy to deal with because I'm there, could have developed into a big deal or expensive issue at a later time.

Coming back to those vaulted ceilings, the ridge height is such that when the scaffolders came back to put the second lift on and make some adjustments earlier in the week, we needed to get a tower in for the guys to reach the top internally.  If I can give one bit of advice to anyone starting out, scaffolding is EXPENSIVE!! I know that very little comes cheap when paying others to build a house, but don't underestimate the cost of scaffolding.  By the time I'm done, mine will be just over £5k.  It isn't the simplest of buildings to scaffold with the balconies and vaults, but even so, it's a significant cost. 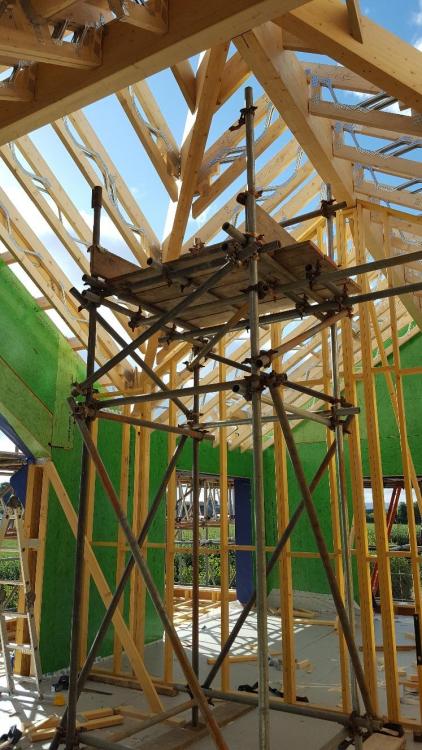 Once all the internal stuff was getting done, the roof was getting boarded.  This is the main, west facing bedroom with half of its roof boarded. 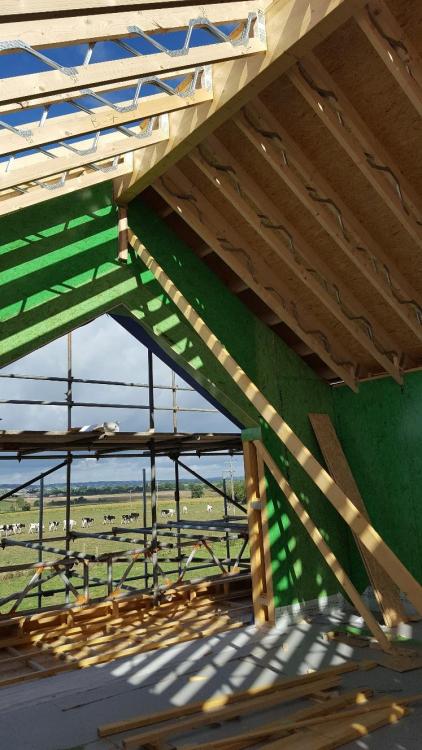 And then the same once it was all covered. 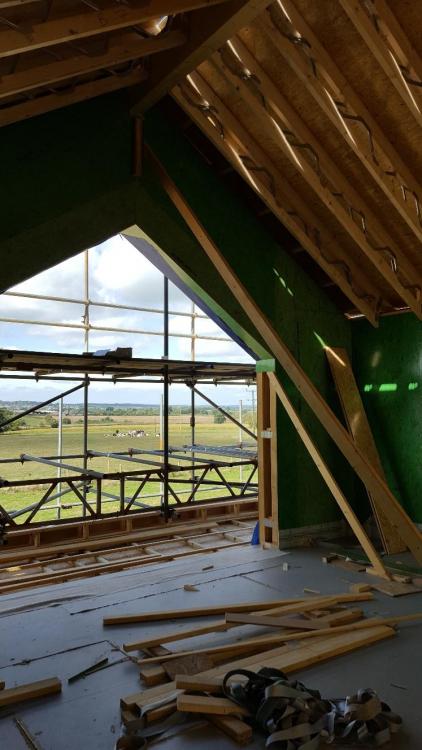 Finally for this post, the balconies have been made ready for boarding and flat roofing.  I have to go back to the architect in the morning to check on the fall of these and the direction of the run-off as it doesn't make sense to me right now.  I need to refresh my memory as to what was discussed and answer a couple of queries PDQ as my flat roofing is now imminent.  But that's another subject for another post. 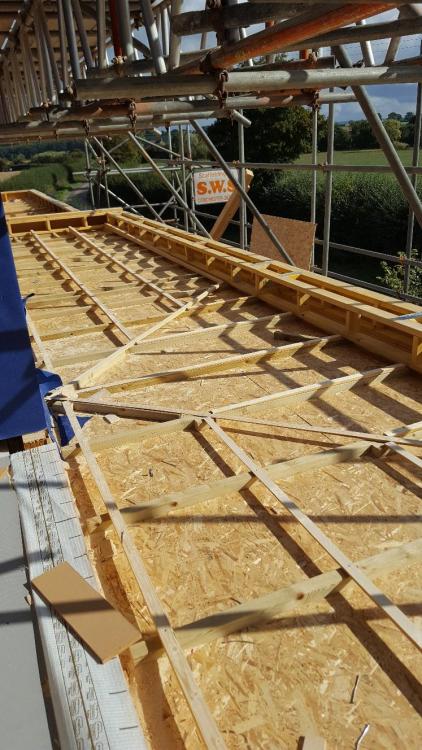 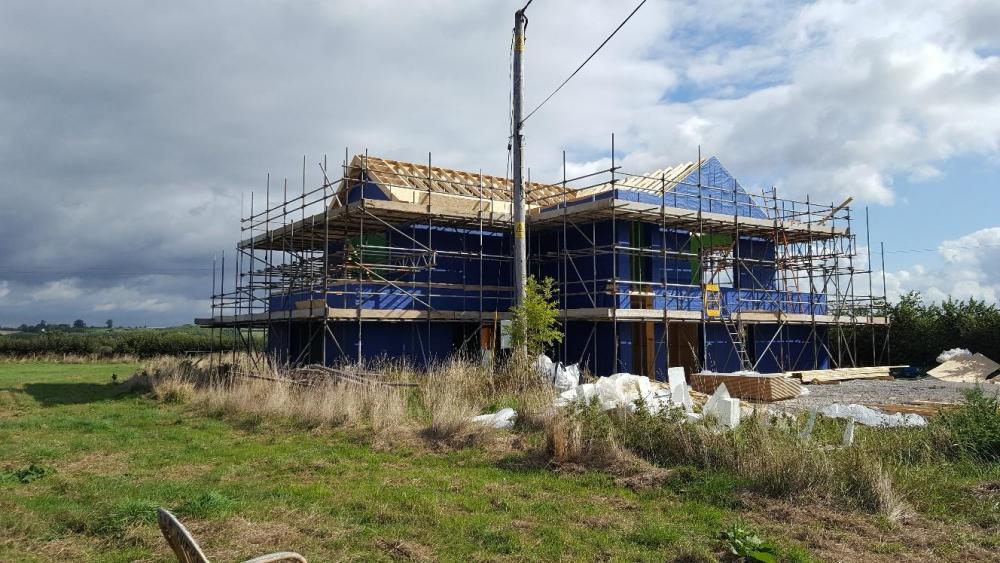