Planning Permission Granted! After trying to ring the planning department on the day of decision at around 4pm and not getting through I resolved to wait until the next morning. At 5:03pm I get an email indicating that planning had been granted. I'd forgotten I'd subscribed to any activity on my planning application! Now, I've still to see the official notification letter with conditions etc but thankfully it was plain sailing. No objections, no requests for information. I took the planning site notice sign down yesterday (could've taken it down 3 weeks ago if I'd realized) just as a nice woman and her two young children was checking out what it said! Anyway, that task is now done, stage 2 finally over!

I've an appointment to meet with the Architect again in August as that's the earliest due to holidays etc. I used https://www.estimators-online.com to get a quote just to see what costs I'll be looking at. I know there will be some differences, not least exchange rates but my last Quantity Surveyor estimate is over two years old at this stage. Plus estimators give a much more detailed breakdown which allows me to see quantities so I can replace standard plasterboard with Fermacell for instance and work out the difference. They email you the report as a PDF but you can grab the Excel from their website afterwards and make adjustments if required. Cheap enough and gives me something to prepare against before August.

My main worry in building next year is the increased costs - materials and labour keep going up. Will I be able to build the house I want or just enough of a shell to convince the bank its habitable so I can move in and upgrade as I go? I can get a revised window quote as I've opening sizes from the PHPP. There's a few timber frame companies, some just do the frame, some can do everything. Brexit may play a part though with the timing of the build commencing after March next year most likely. So if I have a NI or UK based supplier, SunAmp, MBC, Kibroney etc lined up I'll have to have a plan B just in case, like most businesses! MBC pulled out of the Irish market but I spoke with someone there on Friday and he said they have started requoting again. There's a small irish timber frame company called Shoal timberframe that the Architect recommended. Not seen their stuff and it's a small outfit. Not sure they do foundations though. Anyway, this is where it gets detailed and interesting! I've a lot to think about as I need to decide what elements I'm happy to do and what I'll leave to the builder. Part F of the regulations in Ireland are under review and ventilation may have to be installed by a "competent person" so can I do the MVHR and ducting or will I have to pay someone else? As time slips you bump into these changes and have to adapt your approach. 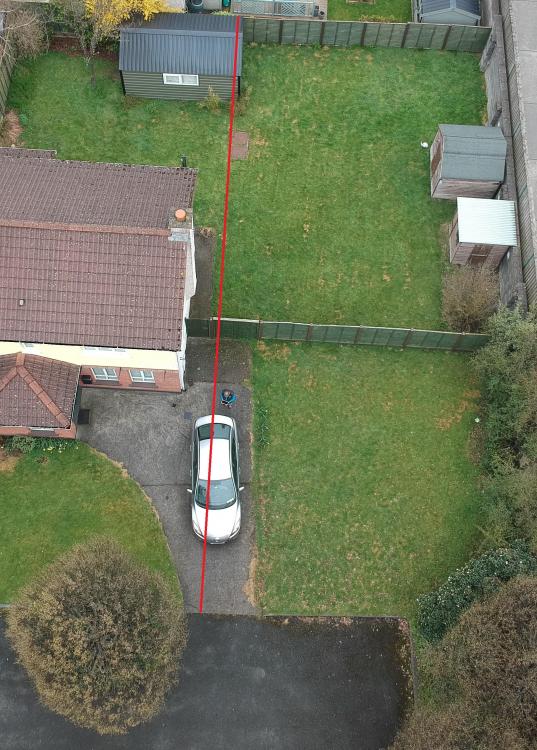 So my site is shown to the right of the red border above. I'll have to shunt the metal shed out the back (painful) about 3 feet to the left. The other two sheds are being demolished. I'll be bringing some of the services onto the site before I sell the house in advance of the build. Electricity should run all the way past the front of the site but I'll want to confirm this. ESB here don't do temporary supplies in Ireland unfortunately. Water is the one I may have to get done as there's a hydrant to the right of the tree in the bottom left corner but after I sell the house I want to be sure I can access it. The pipework may not go much farther. Broadband sweeps though the garden of the house in the bottom left of the photo. I'll bring that onsite and see if I can get it tested so there's no need to dig things up again after I sell the house. The driveway will be split and a new double one created on the front garden of the existing house to maximize the site space I'll be keeping. It all adds to cost unfortunately. I'm not sure if I'll get insurance for those groundworks as getting public liability on the site itself (after I sell the house) to cover me until the build starts will likely be expensive so having a full self build policy for a 12 or 18 month term would make more sense.

So, the next few months are about the figures and seeing if I can afford to build with the funds available. Added to that are:

There's a good self build exhibition in September in Dublin so it will be interesting to have more serious discussions with some of the exhibitors there this time.

One of the factors I'll have to watch out for is the maximum self build mortgage I can access. Most banks will only lend you 80% of the build costs. Now I'll own the site so I hope this will cover that 20%. Some banks also want to see a 15% contingency fund in place. The bank will determine how much a 3 bed detached house is worth in my area and after taking my salary x 3.5 I'll either be able to afford the build or be way off it! Also I've to get permission from my current mortgage bank to sell the house minus the side garden.....

I'll be holding off any groundworks until this is all clear to me and how much maneuver room I have. There's no point doing the new driveway etc if next year I'm told our costs have gone up another 5% by the builder and I'm left swinging! Anyway, I'll have to sit on my hands a bit longer and do as much due diligence as possible and see if any builders come back interested from the tender process before making up my mind.

I've always thought that until the first wall panel goes up I won't actually believe this is real. It's all paper and numbers and has been for so long. Here's hoping if it's to be it's to be and thanks to everyone on this site for their advice and support!