So not much happened on site today.

Just kidding - the 'whoosh' of the entry title refers to the speed of the upper floor going up.  Just amazing.  Equally, though, it could refer to the rotor blades of a Royal Navy lynx helicopter.  Huh? Let me explain.  For some time now, ever since the slab started going down, in fact, there have been a couple of navy lynx helicopters that seem to have a regular route (I assume from RNAS Yeovilton as it's not that far away) passing not far from our site and they're generally over at least once a week.  Since the slab started going down, their fly-pasts have become a little closer each time and a little slower.  This afternoon, a single lynx flew over.  I mean right over.  Like, directly over head, banking steeply around the build at a very low level right over.  I'm sure I saw the pilot wave.  So, I'm just saying it now, but if MBC get an order from either aircrew or a pilot of a navy lynx helicopter, they know where to send the bottle of wine for the free advertising.

So, what did happen today?  Well, the final load of timber frame components arrived around mid-morning but the crane and MBC were there from early doors this morning, busy putting into place what was already on site.  First in were the south east and north west corner walls. 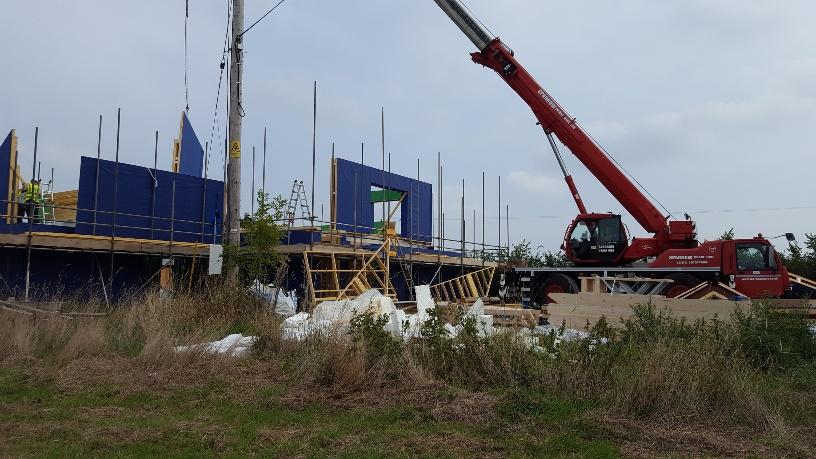 Then came the walls either side of the east and west gables: 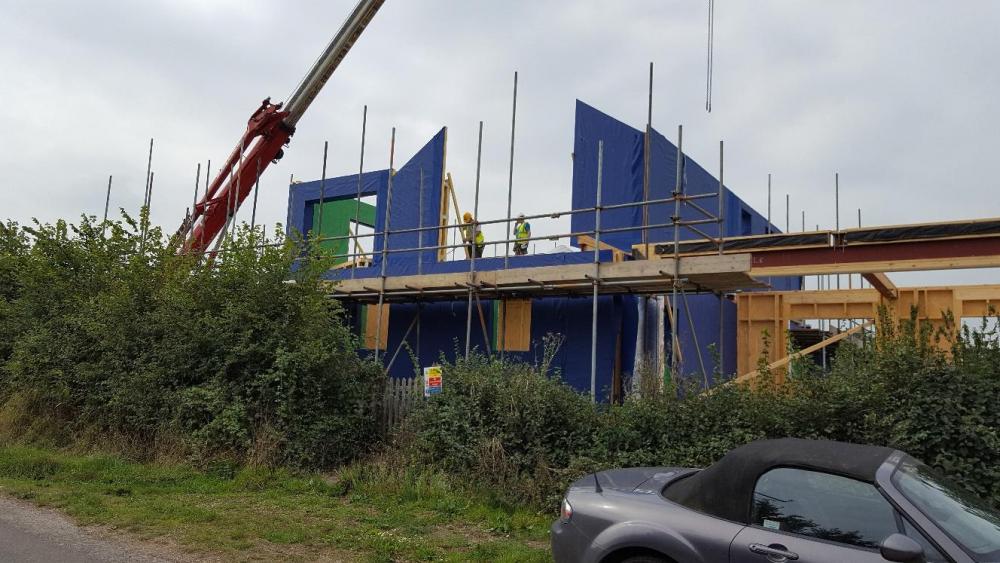 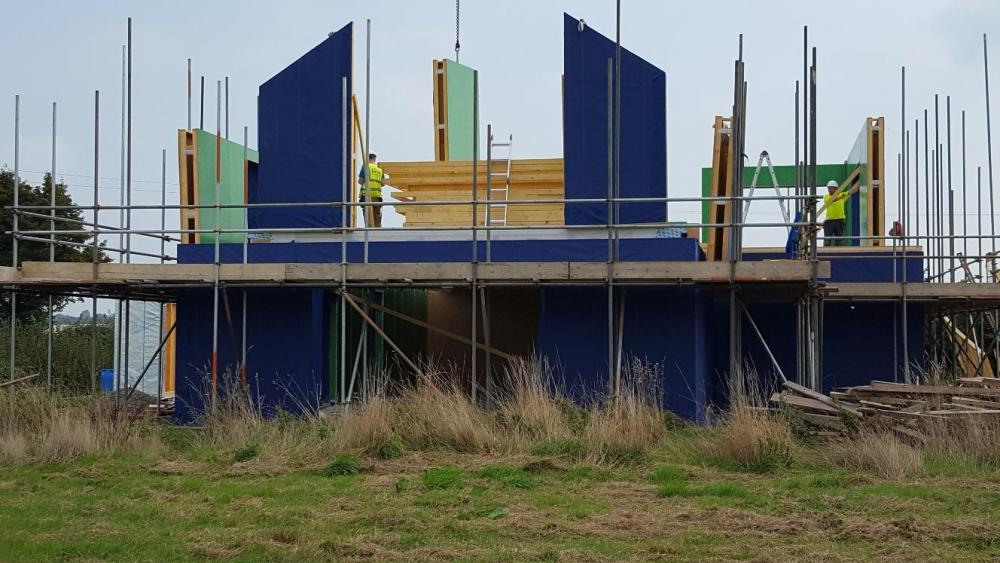 Once the adjacent walls were in, the gable steels were craned in: 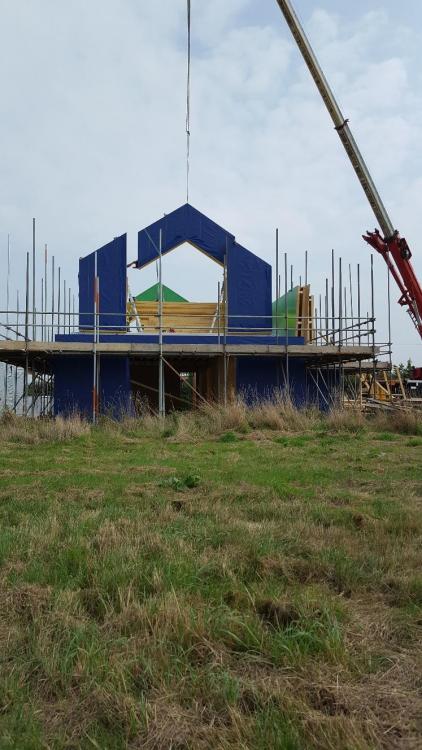 The east gable was done a little differently.  The steel was put in first, then the timber section placed on top: 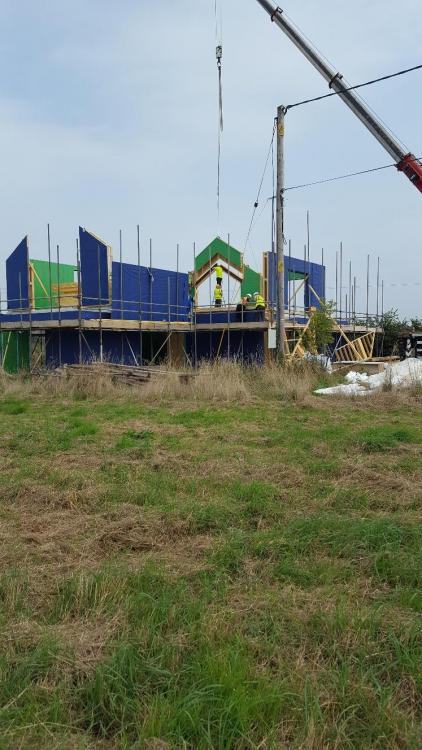 Here's a closer view of the east gable steel being worked on: 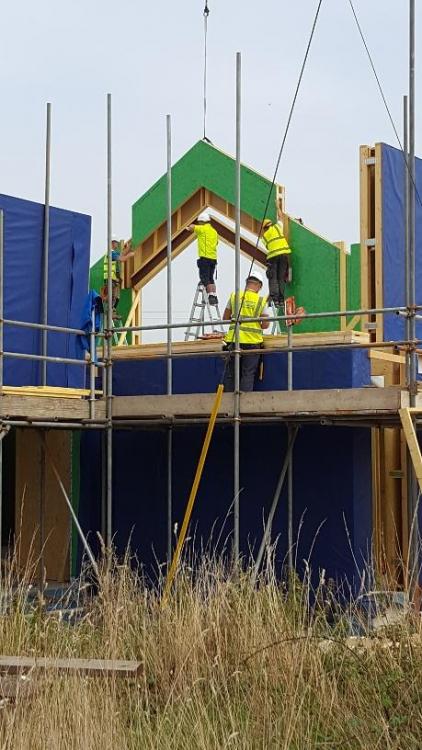 And here's one of the big side wall panels being craned in: 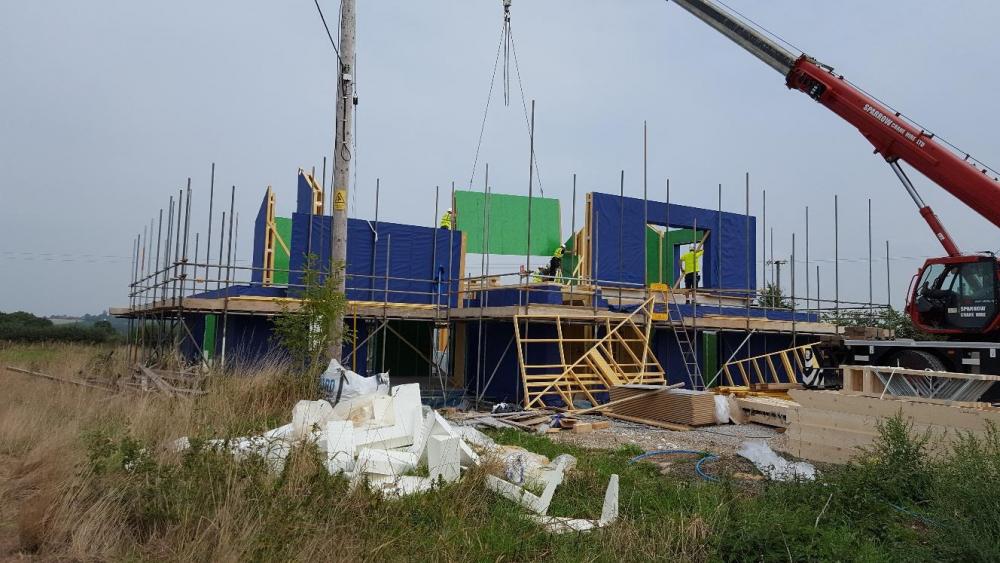 Then the slightly different design for the south gable.  This doesn't have an apex in the glazing, so the section is done differently. 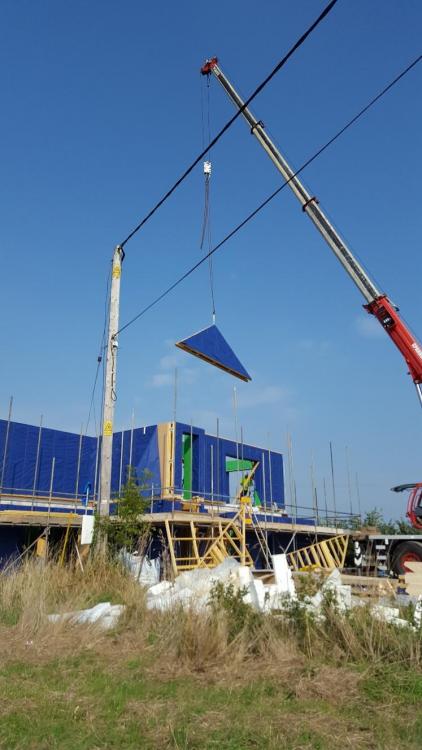 Once the team broke for a late lunch, I scampered up and took a couple of photos from the scaffold for a different perspective: 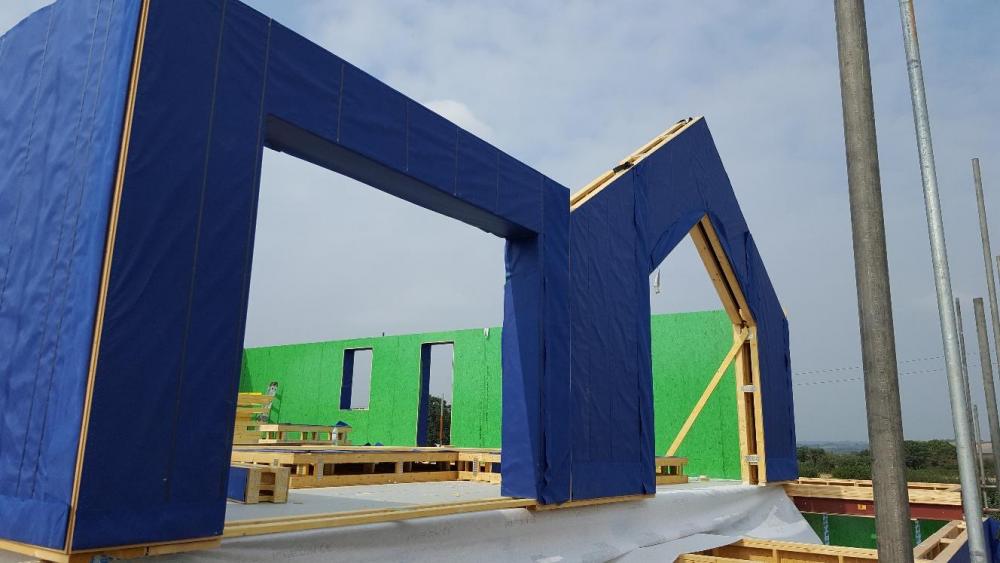 By late afternoon, the full height opening for the stairwell window was all in and work was starting on the internal stud walls. 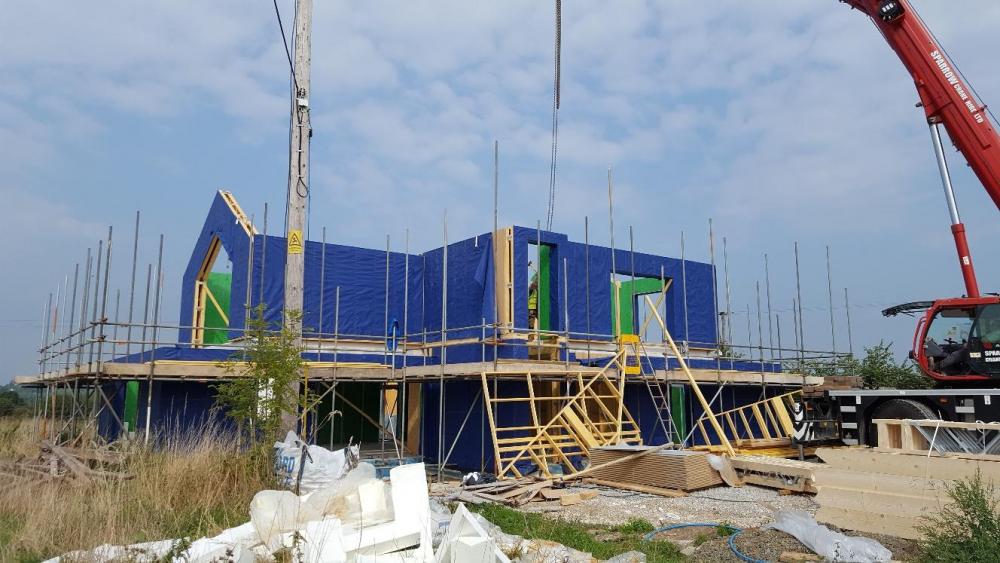 As well as the internal walls, the guys were prepping the top of the gables to receive the roof beams that will go in soon by cutting slots in the very top of the apex 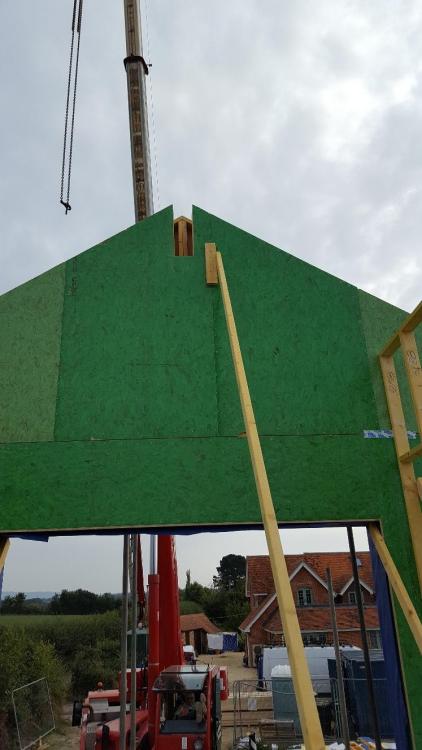 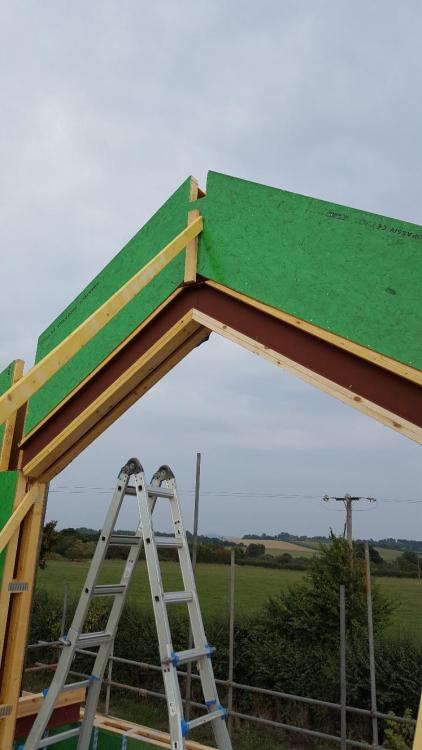 Final pic for today that I know will excite all you construction fans, is the treatment of the steel beam ends and the glulams: 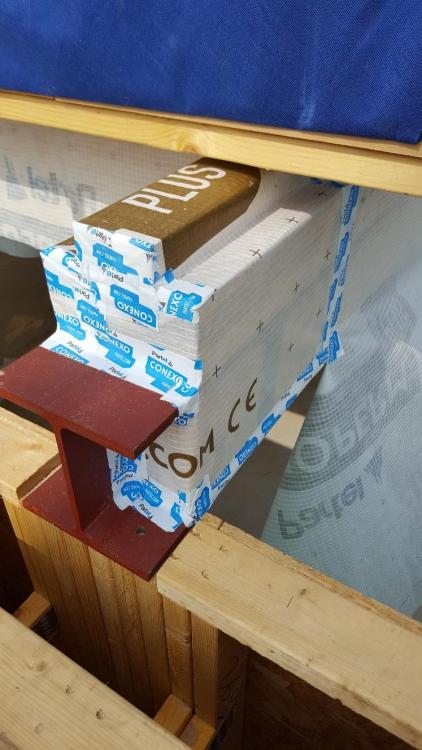 So, what next?  Well, the scaffolders are due back tomorrow to put the second lift in place and make any adjustments that the MBC team need to do the final stages of the timber frame.

In addition, I'm still chasing down and getting more roofing quotes as my solar PV installation is due on 26th September and I still need to get the eaves course and velux windows sorted by then as I'm pushing my already extraordinarily good luck with the weather in getting weather-dependent jobs done that far into the autumn.  The glazing is also due that week, so I'm hoping for a good one! 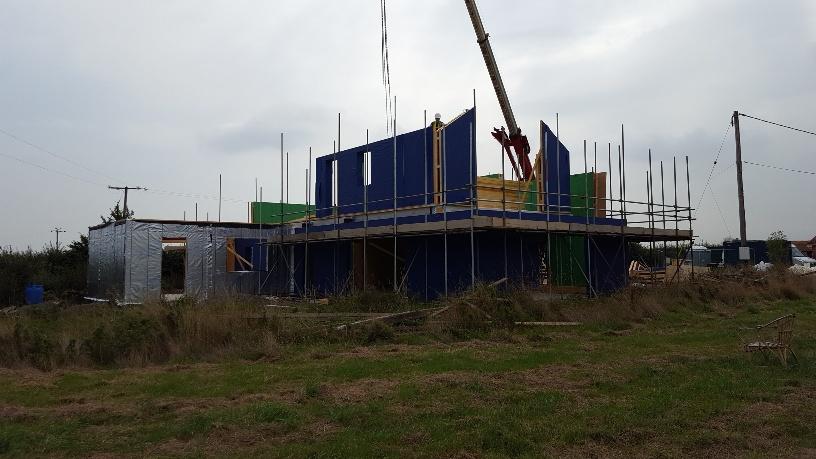