You had better be, because once MBC turn up on site, it's fast and furious and everything has to fit around them.  Things happen at an incredible pace and no matter how much you read about it, how many videos you look at, it doesn't quite prepare you for the reality of that speed, or not in my case.  Some surprises are good, and this was one of them.

I'll get to the photos shortly, but first a few comments on what else has been happening since the slab was finished on the 9th August, or thereabouts, as some is preparation and others are running in parallel.

First off, immediately after the slab was finished, I confirmed that everything was still good to go with the scaffolders and that they would be here the week before the timber frame was due to be certain it was all in place.  I understand that scaffolders have quite a negative reputation in general and I can only speak of this, my one experience of dealing with them, but so far the firm I'm using have been professional and polite throughout, from the manager to the guys actually putting the scaffolding up.  Long may it continue.

You may recall my post about my little problem with the overhead electricity lines and my concern about being able to put sufficient scaffolding up for the MBC team to do their thing.  The scaffold guys came around as far as they could with it, but there isn't much around where the garage will be and I will admit to having some qualms over this and whether it would cause massive problems for MBC.  It turns out that it didn't.  At all, not in the slightest.  Nada.  Phew.  You'll see the detail of it later, but it was a weight off my mind to see the garage actually going up.

So what's happening with the electricity thing, then, I hear you cry.  Currently, it's a waiting game.  There is a viable and acceptable solution in play, which is to replace the poles that support the lines which oversail my property with taller ones, an increase in height of about 3m.  This is fine with me, as I don't object to the lines being there, after all, I bought the property with them in situ.  The wait is down to planning permission, but not mine.  It seems that because the proposed increase in height of the poles is greater than 10% of their current height, the DNO has to apply for planning permission to replace with the new, taller ones, and the DNO is no different from we mere mortals who also have the statutory 8 week wait for the planning decision.  So, we wait.  Sadly, the DNO are showing no signs of paying for the work so far and the quote for the work, inclusive of VAT, is around £8k.  Let me state at the outset, I have no intention of paying £8k for this, particularly as the lines running over my property are then on a voluntary basis, with my consent (the wayleave agreement).  I have done some reading around the subject and, in particular, the level of compensation that DNOs typically pay to householders if a wayleave or its more permanent cousin, an easement, is granted to the DNO.  In the case of an easement, it's anywhere between 1% and 2% of the value of the property with all the legals at the DNO's expense.  I haven't had a chance to talk through this with the wayleave officer, but I suspect and hope that we will reach agreement on the logical course of their doing the work at their own cost and I will grant them an easement.  It seems a fair exchange and an efficient way to give a good outcome.  Whether they take the same view remains to be seen, but I shall update once I know more.

With regards to other tasks, I'm basically thinking ahead to once the structure is weather tight and secure.  This stage of the timber frame should be done in a couple of weeks, so let's say 14th September.  My solar PV is all booked and ready to go shortly after that but I need to get the velux windows and a roof course of the tiles up so that the PV installation can go ahead.  I'm waiting for quotes right now and hope to have this sorted by early next week.  Once the solar PV is in, I won't call the roofers back straight away as I need to wait for the glazing installation, which is due on 24th September, so the rest of the roof will get done most likely in early October.

What else?  Well, my UFH, MVHR and all the kit for that is actually starting to get sorted this week, from tomorrow.  MBC are pushing off to another job for a couple of days to give my plumber time to get the UFH stuff sorted for the first floor.  What? UFH upstairs? Yes.  I'm a girl and I function best at temperatures a couple of degrees higher than you boys.  It may be that we don't need it, but it's easier to put it in now than for hubby listen to my teeth chattering for the next 30 years.

Okay, okay, I'll get to the action stuff now.

So, bright and early the day after the bank holiday, the first enormous flat bed lorry stacked with timber frame arrived.  The crane was already on site, as were the MBC crew.  Actually, I think I've got 2 crews, a total of 7 guys yesterday, which explains the blistering rate of progress.  It was a really tight squeeze getting that lorry up the narrow lane to the site and the drivers really prove their mettle getting in and out of there. 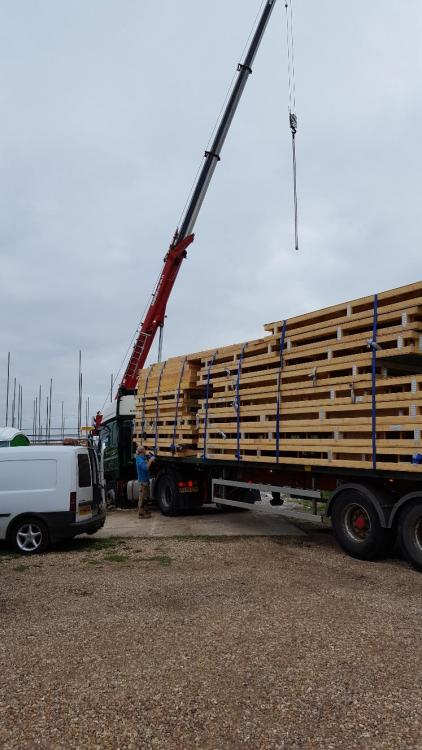 This is yesterday's crane.  They have an incredible reach and are quite something to see in action.  I couldn't get the whole thing in a shot. 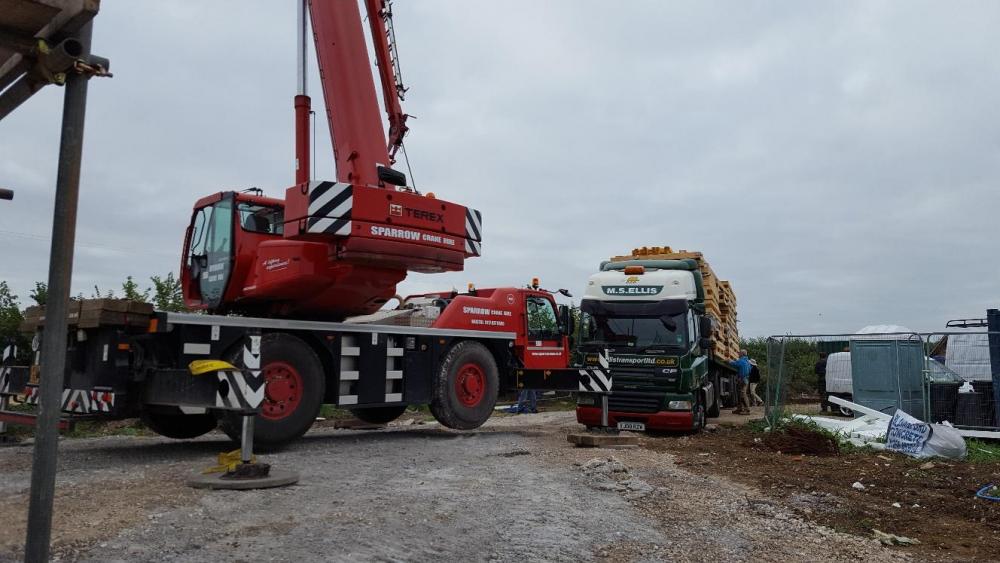 Before anything happens with the walls, the team go around string marking where the beams are and putting down sole plates for the walls to lock into.  The black stuff is the DPM which overlaps the EPS underneath. 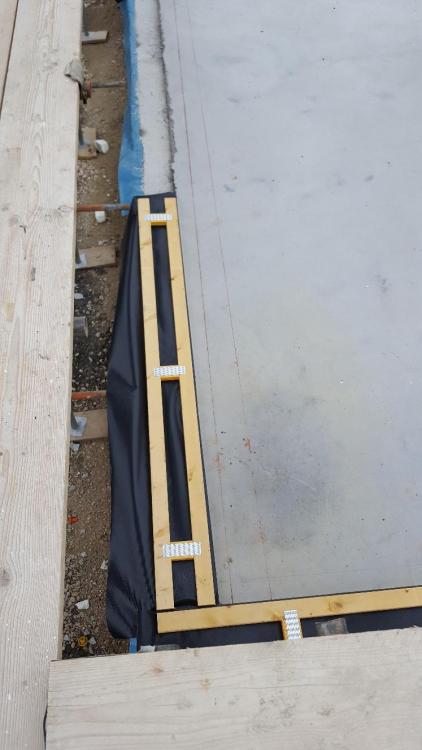 Space was getting a bit tight on the site, but between the hard standing and the inside of the house, everything found a spot. 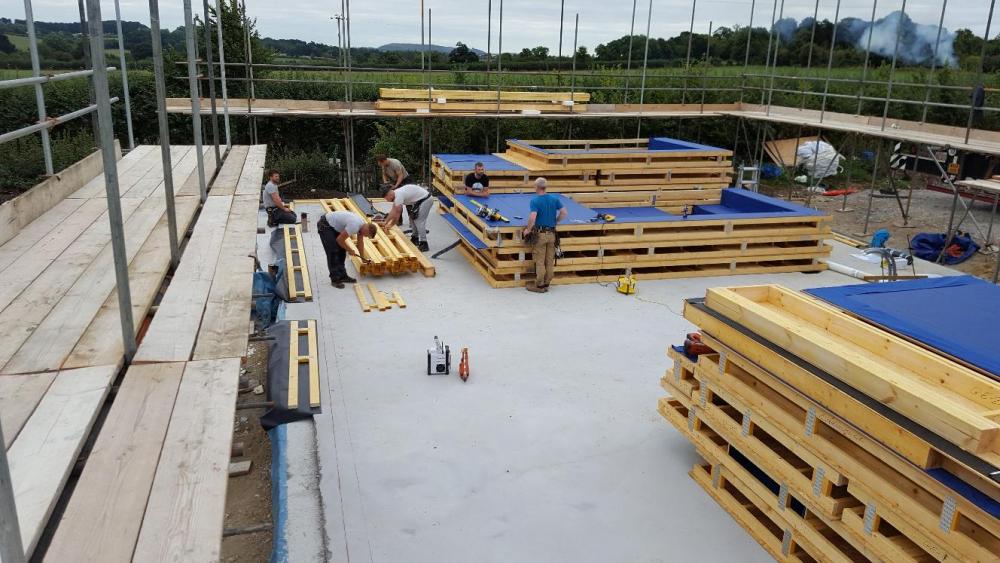 Once all the marking out was done and sole plates were down in the right places, the crane hauled the walls up and they were guided into position. 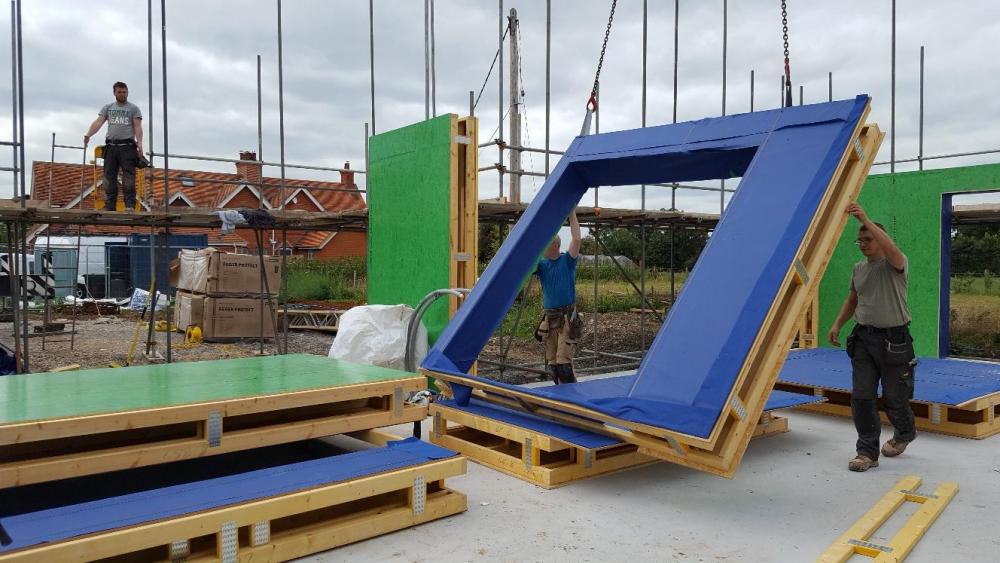 Here's the view over the field from what will be one of the living room windows. 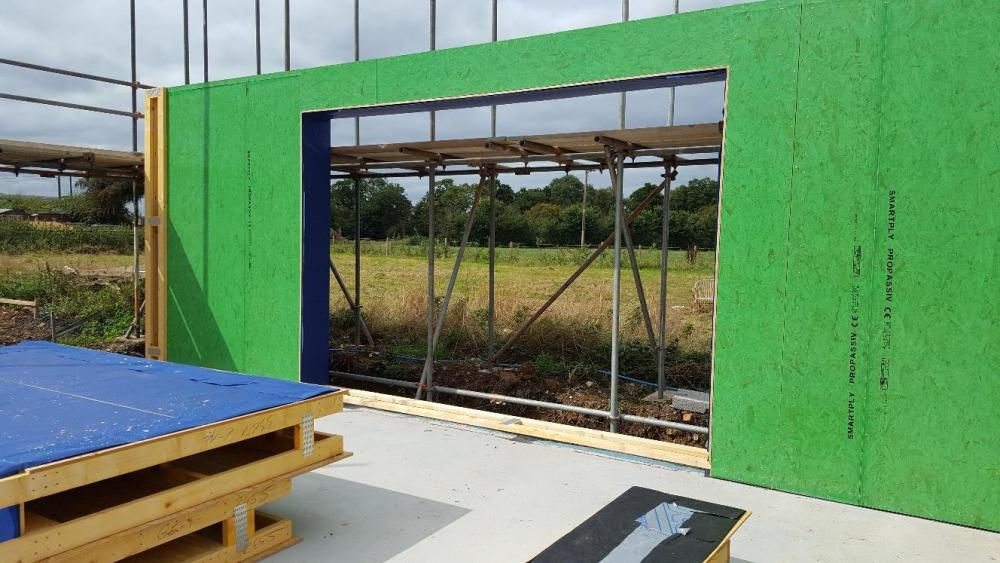 At the end of yesterday afternoon, all the external walls were up and they starting marking out for the internal stud walls. 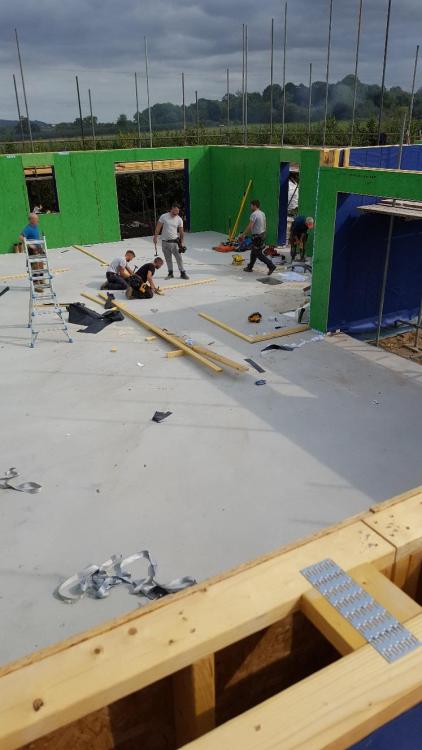 There's more to follow from today, but I'll put that into a separate post.  This one's busy enough.