With our final concrete pour over last Friday, we breathed a sigh of relief. The worst of the messy work was done and it we could start work on the roof.

It was a heck of a week and loads got done, on a very busy and noisy site. Good for us but not for our neighbours. It’s a problem every build faces, maybe worse for a self build where you have known your neighbours for years and been on good terms. We’ve done what we can to keep noise down and not to work antisocial hours, but sometimes you just can’t avoid it. Our last concrete pour should have started at 11am, the concrete lorry didn’t turn up until 3:30pm and as a consequence we were still working on site at 8pm. Then two days of incessant hammer drilling didn’t help. When you already feel like you’ve been put through a mangle, being confronted by an angry neighbour telling you they are at their wits end and that you’ve got to stop is not a good feeling. I think we are now past the worst of the noise but there is plenty of sheet to be cut and nailed down before we return to relative peace.

Our plan for the week was for two experienced roofers to start work on Monday and have the roof done by Friday. As always it didn’t quite work out the way.

First problem, the steel purlins (the beams that span the roof to support the rafters) were not in place. The sockets for these should be cut in the nice soft ICF and shuttered prior to the last pour, in our case this did not happen as the builders ran out of time preparing for the pour. With the concrete being new and not fully hardened we were told it would be a straight forward process to cut the purlin sockets. Good news as the lifting gear to place them was scheduled for Tuesday.

At the same time as the purlin sockets were being cut work was being done to get the pole plates in place to take the floor joist for the loft. Getting the floor in place would make working on the roof much simpler and safer just by reducing the working height. To their credit the roofing team Jimmy and Sam did not sit around but worked with our other builders to get the flooring down on the first floor. To do this all the bracing from the pour needed to come down and the temporary 9mm OSB floor removed along with all the shuttering bits from the pour.

Lifting the beams into place on our site is awkward, the front of the house is less than 5M from the pavement making reaching into the site difficult. We had thought we would need a crane to cover the angle and distance rather than a tele handler. Cranes are expensive, over double the cost of a tele handler even if you have an unsupervised lift. After a bit of phoning around we found a HIAB lorry with a massive reach. This turned out to be a very good option, far less disruptive than a crane as it did not block the road. Our beams are all less than 150kg so well within the full reach capability of the lorry. 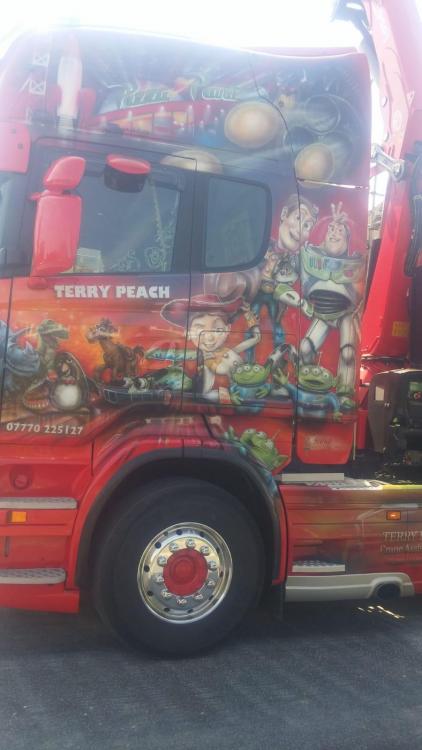 The lorry turned up on time mid day Tuesday, and what a lorry it was. It turned out to be a show vehicle with stunning paint work, apparently it’s been on TV on multiple occasions.

There were still two purlin sockets to cut. While work continued on those, the HIAB lifted in the other three beams into place. We only hired the HIAB for half a day and we were running out of time. After a bit of discussion the remaining two beams were lifted onto the gable walls by their sockets, so they could be manhandled into the sockets later. 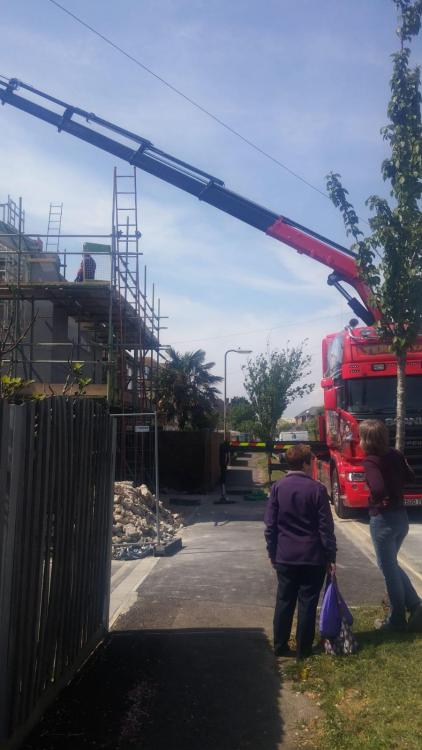 With the purlins in their sockets it was pretty obvious that they needed packing to bring them to the correct levels and set them straight. It had already taken a day and a half to cut them out, so still more work. Our lesson from this is that while it seemed reasonable to cut the sockets after the pour it really is NOT. The sockets are much rougher and cutting their depth with a hammer drill is far from precise, noisy and time consuming. It’s quite surprising just how quickly the concrete hardens of.

By close of day on Wednesday we had the floors done ready to start work on the roof. With just two days before the lads headed back north it was agreed they would also work Saturday morning. Just to add to the entertainment we had two very large 2400 x 1200 roof lights each weighing around 200kg scheduled for delivery on Friday. The roof lights sit on OSB sheeting on the rafters not a complex fit but the roof aperture needed to be constructed. Our builder wanted to stick to the schedule, but by late Thursday there was still a lot to be done and we decided to postpone to the next Wednesday. By then we should have a decent chance of being ready and have hired the HIAB again so we can get them into place safely. 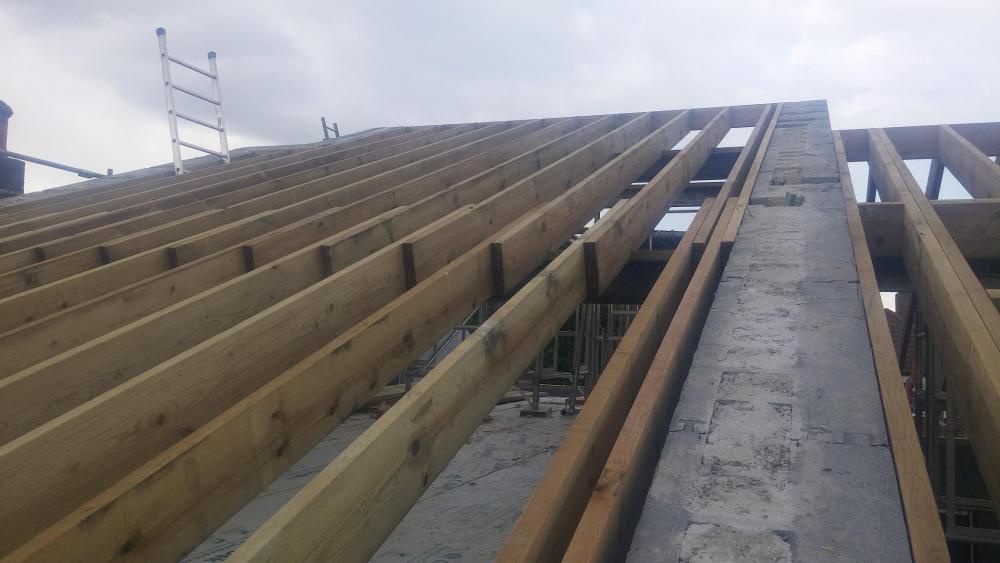 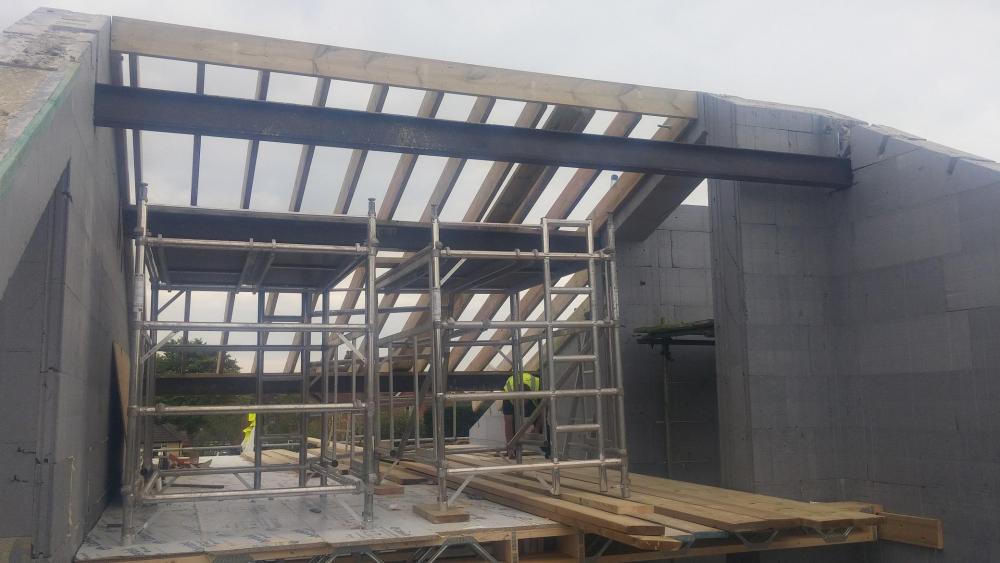 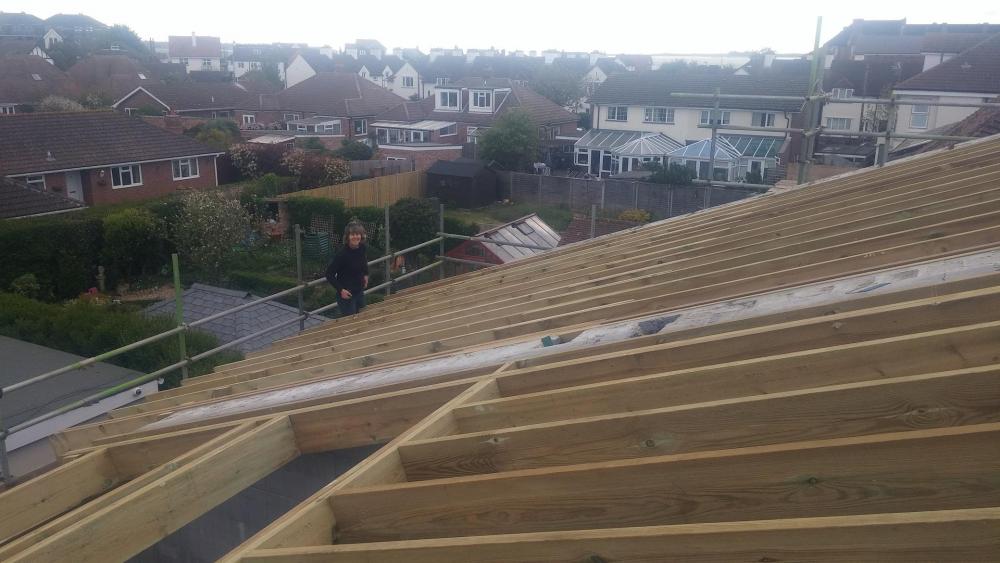 Work on the roof progressed at a pace and by 11am Saturday we had most of the rafters in place, just one complete section untouched. Our builder does not have any joiners or roofers, so we are now scrambling to find help to finish the roof next week.