At the time of my entry we were trying to find a roofing team to finish the work. The team drafted into build the roof had had to return to Glasgow to meet other commitments requiring our builder to find another team to pick up and complete the work. Much to our surprise we ended up with a choice of two, a local builder who had done work for us in the past and a local roofing company ICF Homes had used in the past. Our builder decided they would call in a favour from a roofer they had used in the past. There was inevitably a few days delay.

To add to the entertainment we had two large roof lights 1200 x 2400 each weighing 220kg scheduled for delivery on the 3rd and the roof was not ready for them. Some last minute calls to Roof Maker and we managed to get the windows rescheduled for the 8th. With the roof far from ready we needed to get the area for the roof lights completed. Our builder put in two guys to do the required preparation to take the windows. This probably created as much work as accomplished as they were not chippies or roofers, but with some corrective work from the new roofers it was enough to prepare for the roof lights installation. 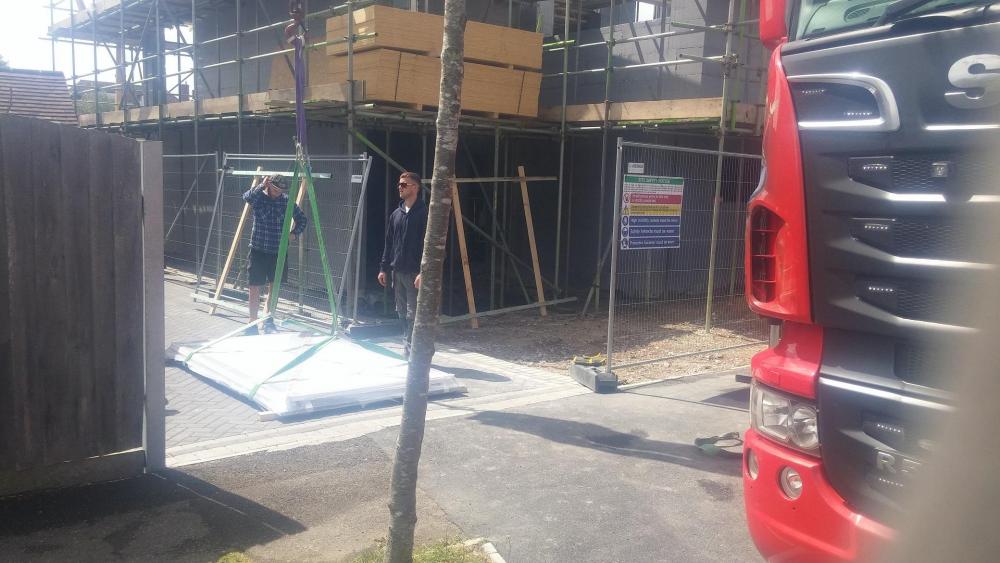 To get the windows onto the roof we made use of Terry Peach and his show hiab again. The day of the window delivery arrived and true to form it was just about the windiest day we had had in a long while. Wind, cranes and large fragile objects are not a good combination and we thought we would need to call off the installation and try again on a more settled day. In any event we decided to give it a go and the windows were gingerly lifted up to roof height on the sheltered side of the roof and gently eased over the ridge into the gale...with a couple of restraining ropes and guiding hands on the roof they where successfully lowered into place with a sigh of relief from Pat and I 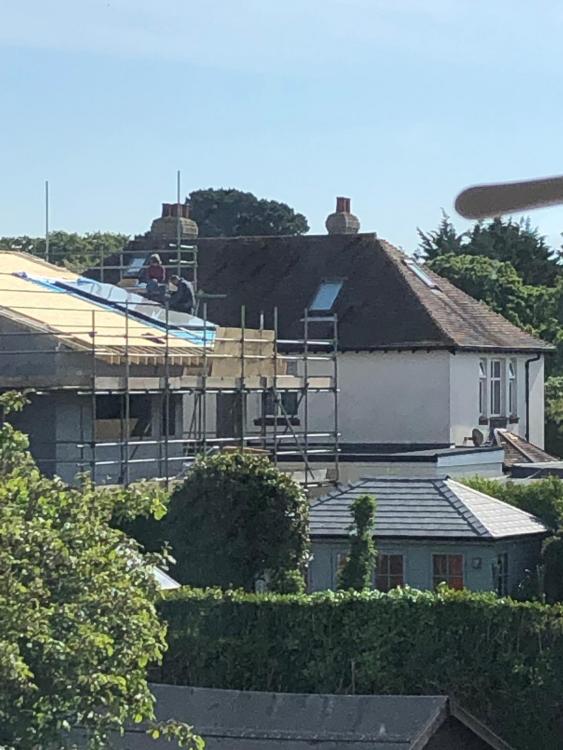 With the windows in place the roofing crew continued to work on our roof. They could only do a couple of days a week due to other commitments and work progressed rather slowly. By the 18th the roof was still not finished, and our roofers departed. Fortunately the remaining work was neither skilled or structural so Pat and I stepped in and completed the boarding, papered and battened the roof. We also boxed in the eaves ready for the spray foam insulation of the roof. 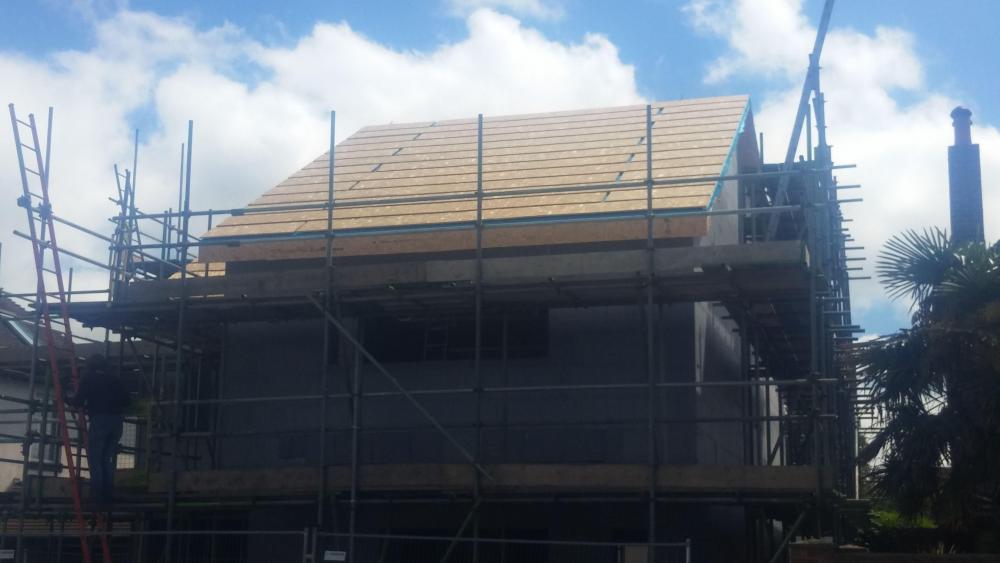 The delay in completing the roof also meant we had lost our slot with the spray foam insulation company. They had been rebooked by our builder but just failed to turn up, no phone call, no email, not a good way to operate. In exasperation we agreed with our builder we would get it organised ourselves.

Back to our schedule... all our windows from Velfac were due for delivery imminently. In our initial planning we had allowed some contingency time for build delays, but not nearly enough. Our original delivery date, the first week in April was arrived at after discussion with our builder. We realised some while back that it was unrealistic and delayed to mid May which seemed like a safe option, oh how wrong you can be! It's a curious detail with the Velfac design that you have to have your window apertures rendered prior to window installation.

Our render work finally started on June 2nd with an anticipated completion date of the 21st. The work got off to a good start and it looked set for an early completion. We opted to go with JUB for our render as they are our ICF supplier . With us being their first build in the UK they have been very good to us providing render materials at cost.

In general the ICF block work was clean and true, just perfect for rendering. Of course there were areas that were not good enough to just render and required remedial work. On our first concrete pour the cantilever beam supporting the first floor was not braced correctly. The beam had twisted deflecting the first floor wall 10-15mm. Regrettably it did not got spotted at the time of the pour and the beam was set. To correct the problem the course of blocks added to the beam was adapted to straighten the first floor wall. This worked out reasonably well and the remainder of the wall is straight an true, but it left a step in the ICF wall face that needed to be fixed before rendering could be done. We did this by building up the wall with cut block and shaving it back, a lot of work. We also discovered another wall bow, not anything like as major but still another task to get fixed prior to rendering.

With some help from Velfac we had managed to get the delivery delayed a further week, but after that they would be charging us £50 a week for each pallet and we have five pallets. With the budget already groaning we decided to take delivery on the 17th June and to store the windows in the house ready for installation once rendering completed. We have some big windows and getting them into the house without damage is going to take a lot of care. We talked to the company doing the window install and they kindly agreed to split the install and to assist in the window unload. When our scaffold was installed we had a loading bay added on the first floor specifically to get the windows into the house. We also have organised a hiab delivery vehicle. Even so it's bit nerve racking, fingers crossed all will be well.

Last but not least we have water and gas utilities connected, just electricity to go. 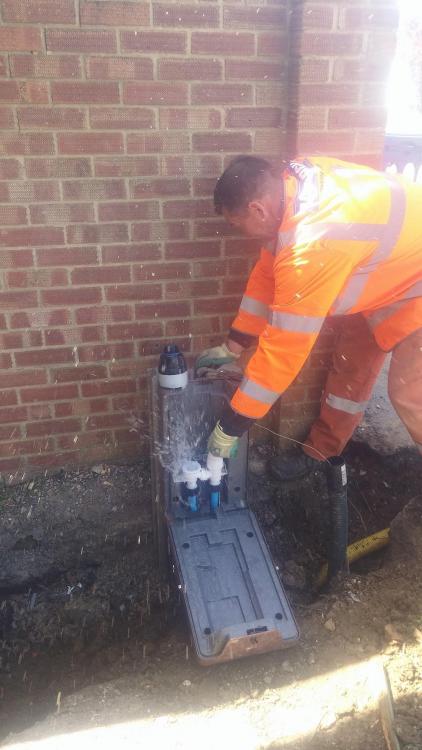 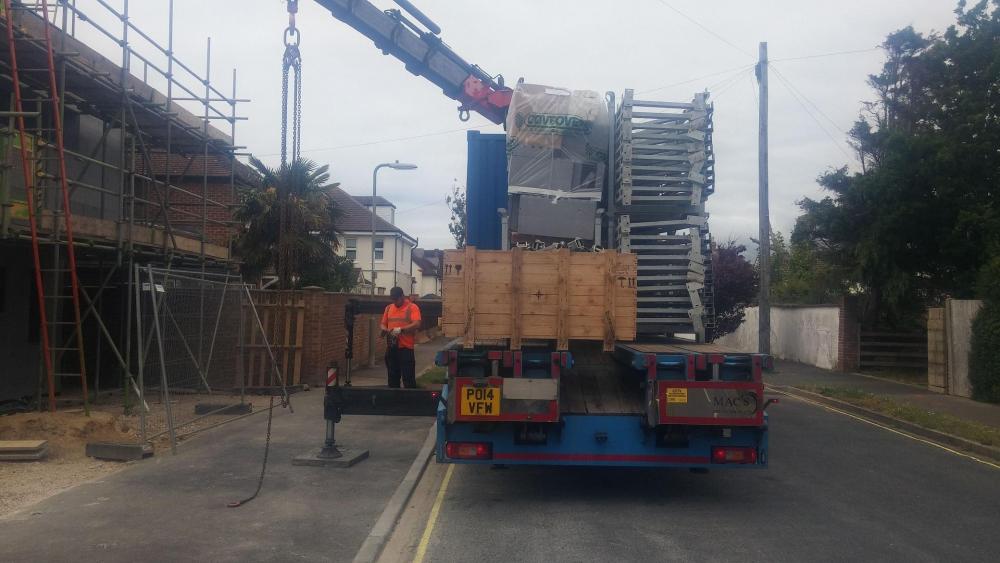