Bang on schedule the raft components arrived on Monday morning. We knew it would be quite a big volume of material on a small site and getting it unloaded and put somewhere it would not get damaged or need moving was s little tricky. JUB insisted on sending the raft on pallets. Our builder was not that impressed with this as unloading the lory requires a folk lift which is something we don't have on site. So we had to hire a set of folks for the digger. With the raft safely stored at the back of the plot the work to prepare the site progressed. The drainage had been marked in the site setting out exercise along with electrical and water ducting. Trying to keep raft punctures to a minimum but also allow for future needs was a concern. In the end we kept it to a minimum with electrical conduit for the rain and foul water pumps and two for water.

Along with the raft we received a letter from our neighbours complaining that I had put our water meter box on their garden wall. In retrospect a valid complaint, it was one of those decisions made in expediency without enough thought. Our water supplier Portsmouth Water will now only make new connection when an above ground water meter box is installed. I duly bought the one box they permit (so much for choice), water pipe and water conduit.  Not having a house on which to mount the box, I made the required connections and left the box mobile so it could be put in place in due course. At which point I called in the Portsmouth Water, regrettably they said they could not make the connection until the box was in situ. Having explained our situation and the need to get water on the site it was suggested I could mount the box on the wall by our property. At this stage I should have thought about it rather than simply get on with it, my mistake entirely. The wall it outside my boundary, by millimetres true , but still NOT ours. Our neighbours were not impressed so Monday was spent  moving the box and apologising to my neighbours. I  shuttered and cast concrete into the wall footings and backfilled with type 1 MOT to repair the wall. Having done this I then putting in two concrete posts 200mm inside our boundary and mounting the water meter box on them. This is what I should have done in the first place.  Slightly different subject, the Groundbreaker Water box, this is the only box that Portsmouth Water will connect to. At around the £150 mark it's a pretty hideous piece of kit both aesthetically and in product design terms for installation. Given their current monopoly and the fact that all new connections will require one it made me consider looking into producing an alternative. A swift kicking from the boss and I was reminded to get on with the house...maybe later once the house is done. 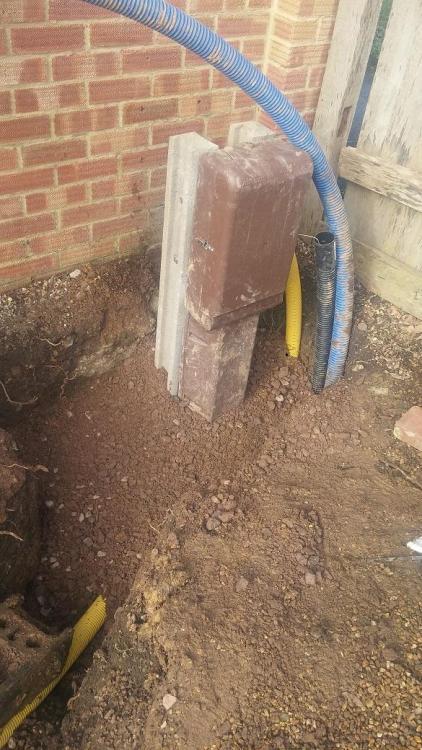 With the drainage in place the MOT type 1 sub base was spread over the raft area,  levelled and compacted. Our builders ICF-homes did this with considerable care and we ended up with a good surface to spread the sand layer which was again compacted before putting down the membrane. Our structural engineers had specified a Radon barrier, we ended up using a standard plastic DPM as Radon is not a problem in our area. The DPM gets glued to the side of the raft sealing it and providing some additional protection for the polystyrene. 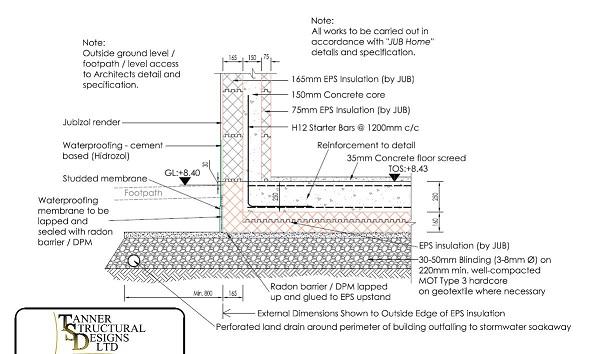 With the membrane down the work of setting out the raft. The perimeter is all keyed together 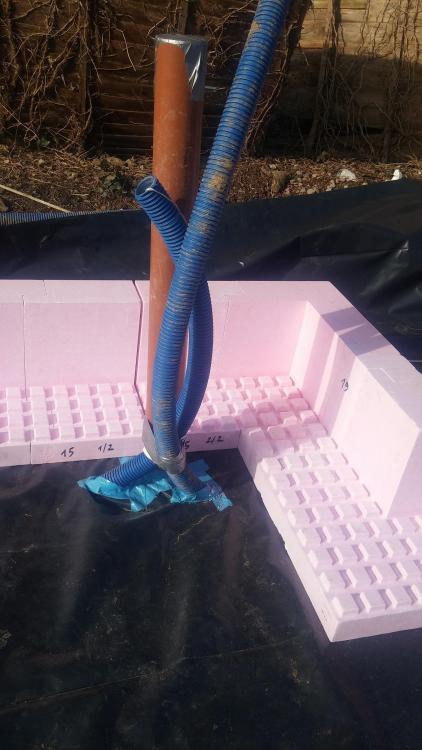 It took a while to get the corners located precisely but once this was done the raft slotted together very well with a really solid interlock. 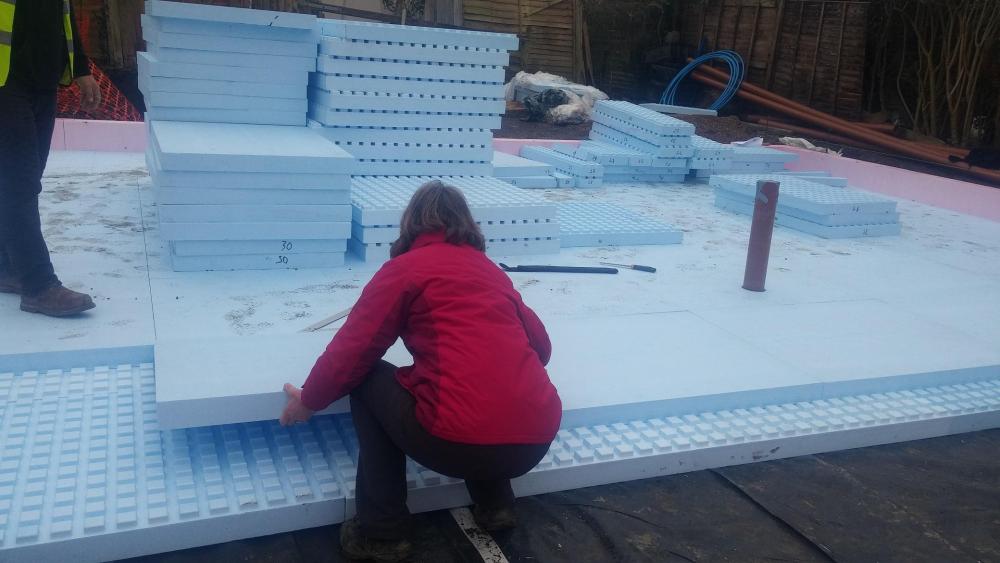 The raft was then completed by adding the rebar, four layers around the perimeter. All in all a lot of steel, Pat and I spent most of Saturday morning helping get the rebar in place and wire tying it to make is solid before the concrete pour. 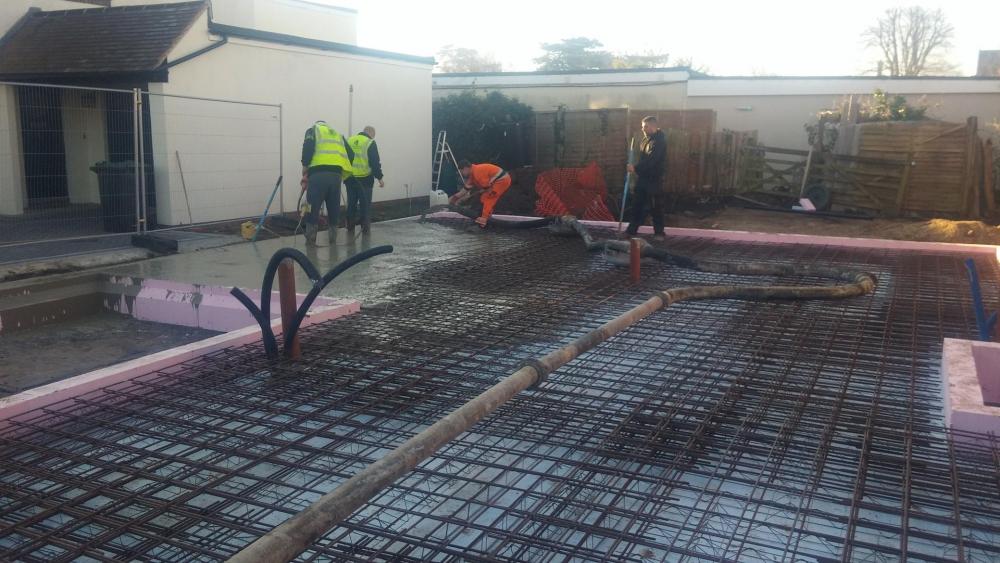 Our raft is now complete and this week the surface water drainage will go in.

Along with the problem with the water meter box our neighbours also bought up the "Party Wall act". Doing a self build is nothing if not educational. The act came into law following problems with basement excavations in London. It dictates that excavations in close proximity to your neighbours 0-6M have to be notified and agreed. In our case we were within notifiable distance, but fortunately were not excavating to a notifiable depth. Our builders were not familiar with the act and no mention had been made by building controls. The act did effect our other neighbours and I contacted them letting them know what work has been done.  Fortunately all the excavations were made and backfilled without incident.

Hoping for a less eventful week to allow us to regroup before our first block delivery next Monday. As this is the first build for JUB in the UK the factory are sending someone on site to assist with the build and wall bracing.

It's very positive to see the house taking shape, we have our EPC which suggests we should require in the region of 68wats/K to heat the house which is great, but we still only come out as a "B" energy rating! the rating system is bonkers.