Acrow props – is there an alternative that won’t fall down?

Yes there is in some cases. Much depends on your programme, whether you wish to give it a go yourself and how much time you have on your hands.

Please feel free to comment / question. I’ll answer if I can (if not, I hope some other BH members will be able to) and provide more detail. 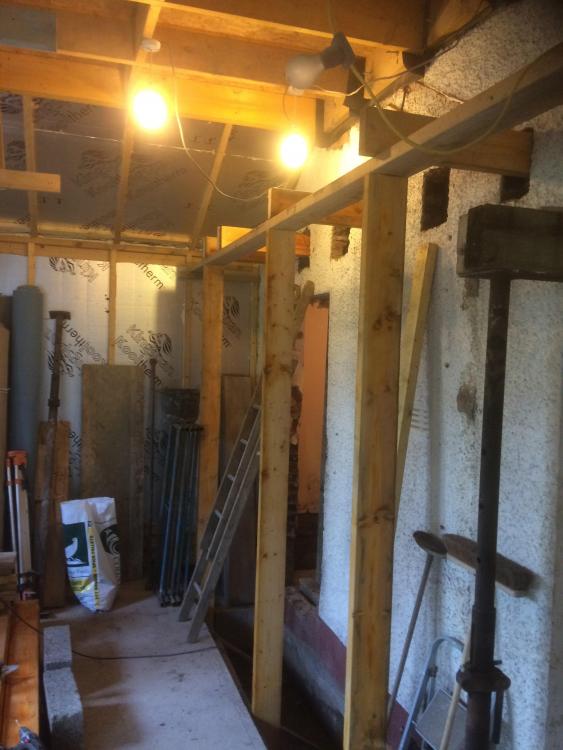 Photo 07 showing holes for the needles and the first few temporary works studs going in. The base of the studs are sitting on a sole plate fixed down to a temporary strip foundation. Part of the sub floor has been built up and concreted to provide a working platform. 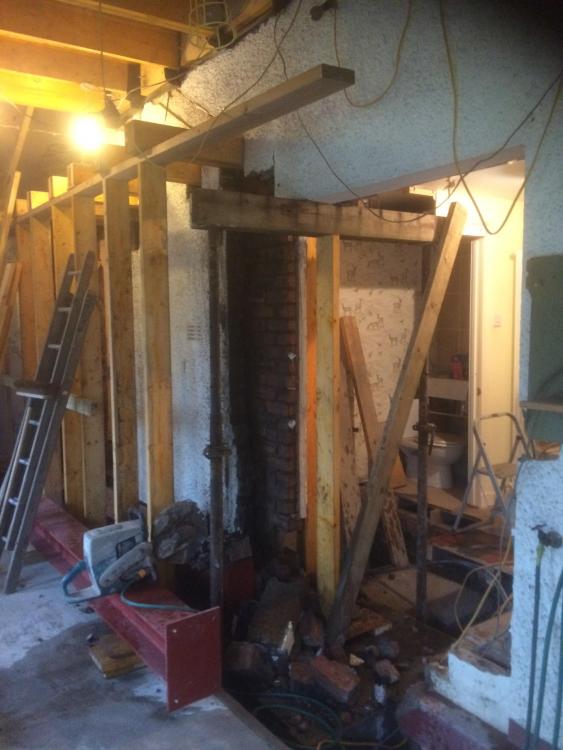 In my case I have been dipping in and out of our project. I reckoned that I would need some 25 – 30 Acrow props for the temporary works which would take me about 4- 6 months as I was also mucking about with other bits of the build. To hire 25 props at £ 5.00 per week = £ 125 per week!

I could have bought the props but I would have needed to get rid of them after in my case, just gave up on that.  I have two or three old props that were used to help tighten up (pre load / stress) the timber propping.

I knew that I could recycle the temporary studs to form a new floor we needed and that if I cut back the needles I could also use these to prevent the top steels from moving sideways. This is called simplistically “ lateral restraint”. Also, I used same needles to provide additional what is called “torsional”  restraint to the top beam ,  a slightly different effect, but is it to do with the fact that I used one beam with a top plate to support both the inner and out leaf of masonry which can be loaded in different ways at different times. These different loading patterns cause an uneven loading on the top of a single beam.. resulting in a twisting (torsional) effect. You can see more photos in post 01. 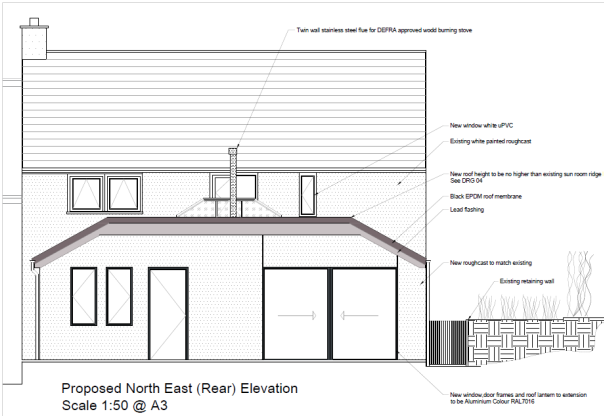 How does it work / stay up?

The starting point here is to calculate the amount of load. With this house the roof spans front to rear, the attic is full of stuff, the walls are rendered brick cavity walls and you have part of the weight of the new extension roof that is now attached / built into the outer leaf of the house.

Once you calculate this you end up with a working load you need to hold up of round about 25 kN/m run of wall.

To make life a bit more difficult the window lintels on the first floor cause the load from the roof to be unevenly distributed so some needles need to carry more load than others. You can see from the photos that some needles are in pairs, some are a cluster of three.

In terms of the studs these needed doubling up in places and the whole lot horizontally braced at mid height with some diagonal bracing just to stiffen the whole lot up. While this sounds like a lot of work once you get going it’s actually quite quick.

This approach is a little different from using Acrow props. With Acrows you wind up the prop to preload the system so that the upwards force is approximately equal to load the wall you are taking away is carrying.

Aside,  If you are Acrow propping things then be careful not to over tighten the props as you can easily start to lift parts of the house accidentally!

Here, what I did was to use a combination of the spare props I had combined with timber wedges to pre stress the system, one set of needles at a time. The other thing is that over time the timber can shrink / creep a bit so I was careful to get the timber dry first and then monitor the system as I went along.

All sounds complicated but once you grasp the principles a lot of it is common sense and this is not a reinvention of the wheel. I know a few old joiners and brickies that still remember doing this when they were serving their time.

Some extra information that may help. As always, comments welcome.

Options for beams-  In terms of material vs labour cost it can sometimes be beneficial to design the steel beam as a single beam with top plate. The one you see here forms part of a double flat portal frame.

You will also see designs that use a separate frame for the inner and outer leaf, a question of balance, each project is different.  You can introduce a problematic thermal bridge at times if you deploy these single portal principles to an external wall, but in my case the steels are now internal..  the thermal bridging is resolved in the main.

Below is a screen shot of part of a temporary propping design for a set of 4.0m bifold doors etc. There was another big chunk of the rear wall to come away at the same time which is not shown. The contractor here was stopped from working until remedial action was implemented. 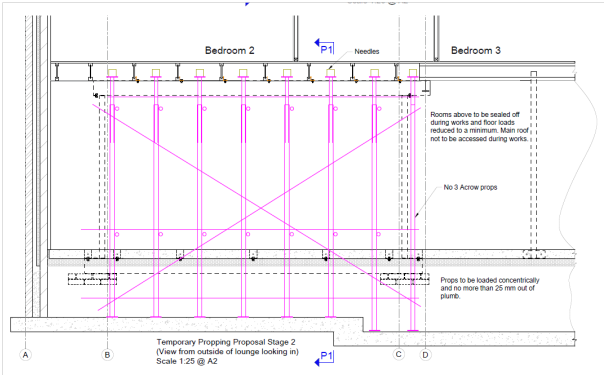 Fig 02: The purple lines are the props and what is called the lacing / bracing system to stop sideways movement.

Work was stopped when this was discovered. Part of the contractor’s defence was that “he was insured” 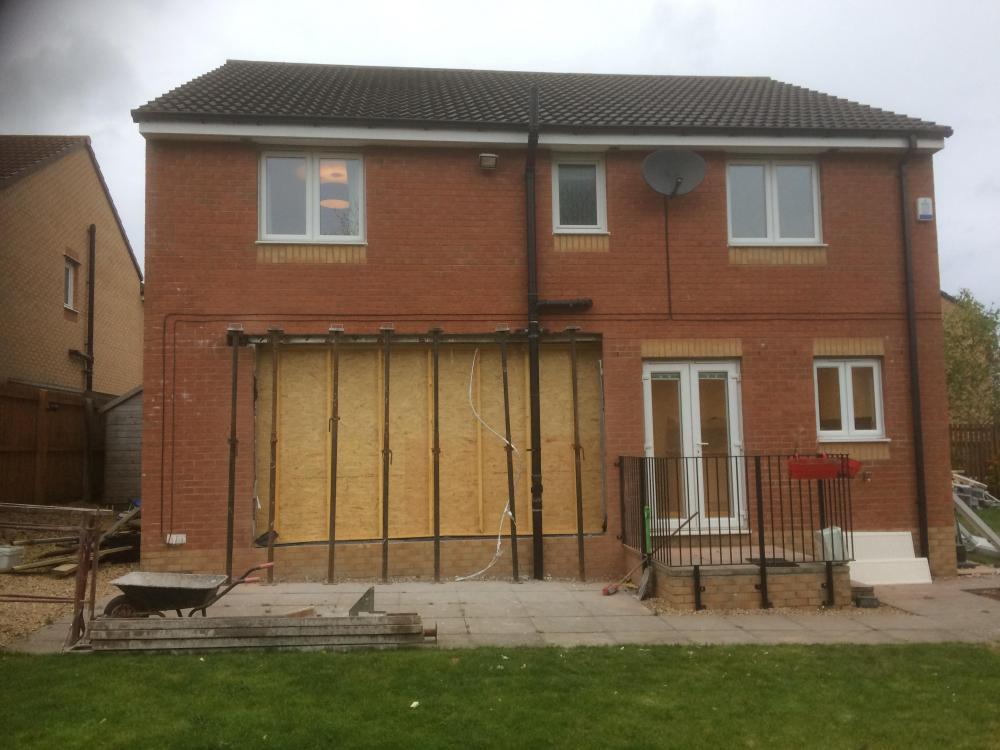 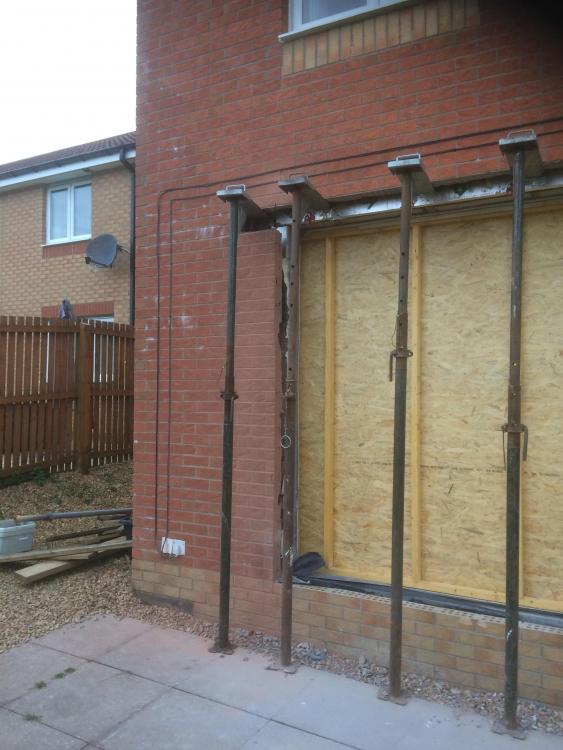 A few points. The Contractor had not investigated the ground under the slab and the base of props can slide about. The site investigation had revealed this ground was very soft. Use of Strong Boy type supports at the head of the props.. these have a reduced load capacity and not suitable for the loads to be carried in this case. Props well out of plumb, no bracing.. further comments welcome.

On a finishing  note the timber propping scheme may look a bit rough but it was designed and executed with no unexpected movement.  If this approach may suit you then as always check with or be a competent person.