After a summer spent cruising the canals we arrived back on site with a little trepidation and a lot of enthusiasm.

When we left the build we had just got the scaffold down and had a lockable water tight shell,. Well almost water tight, we still have two leaks. One where our roof lights join and another on a roof seam that abuts the wall on the house gable. Fortunately neither were bad enough to have caused any damage over what has been a pretty dry summer.

The internals of our ICF build required no supporting walls making it a nice big unencumbered space to start installing the MVHR, electrics and plumbing. We had decided to get the MVHR installed first as the pipes are the largest and least flexible. The system design for our MVHR had been provided by Blaugberg making it a fairly straight forward install. Of course the design hadn’t taken into account joist spacing or any other details of the construction. Taking the joists into account etc we ended up mounting the two manifolds next to the MVHR unit raised for the floor to allow access. Getting the MVHR into position involved getting a bulky 80KG box to the roof area of the house, a task made pretty simple with the aid of an electric winch. 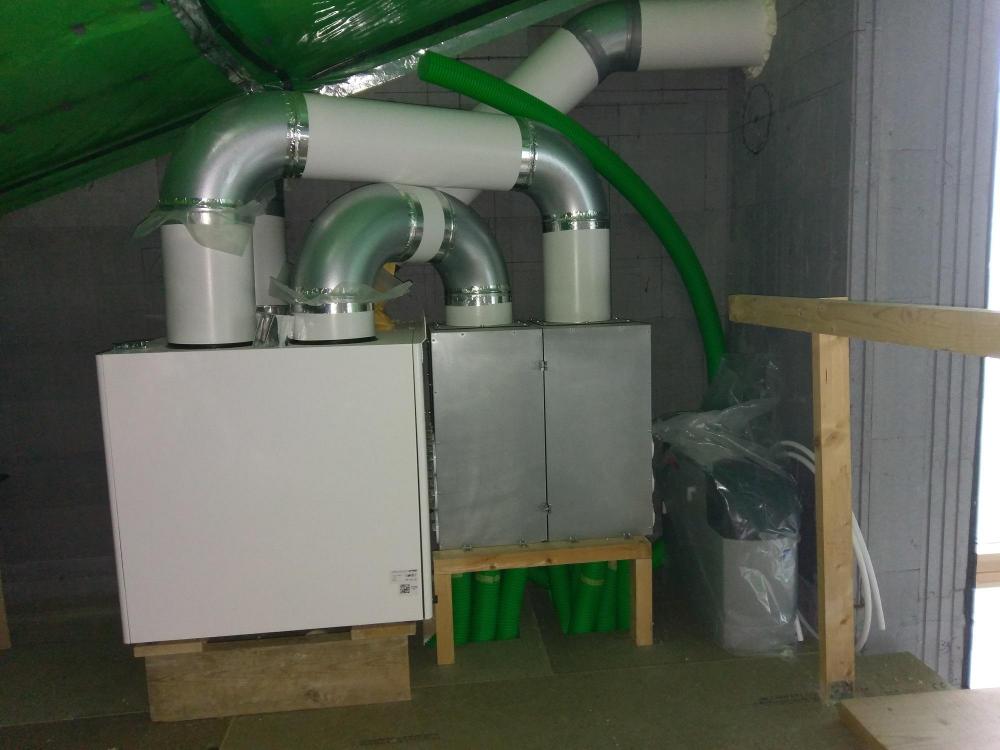 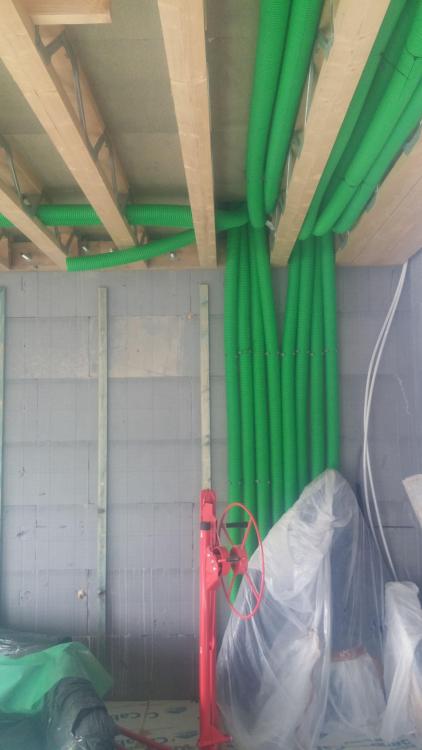 With the manifolds raised off the floor and two of us feeding the pipes through the aero joist webbing we managed to get all the pipes in with minimal loss of skin. The manifolds have large removable panels that allow access to install flow constrictors. Our intent is to get the MVHR setup as soon as we can to help keep heat in the house and to get the humidity down from the 65-70 percent it’s currently at.

One other job we wanted to get done early was an initial air tightness test. Although we are not building for passive certification we want to make sure we are as close to the 0.6 passive house level. We needed to get the roof VCL installed, in our case this is just a plastic membrane. Getting the membrane in place where we have vaulted ceilings was time consuming as it involved step ladder, a ladder and staging to get to the top of 5M high. With the membrane in place we called in a local firm to do the air test. 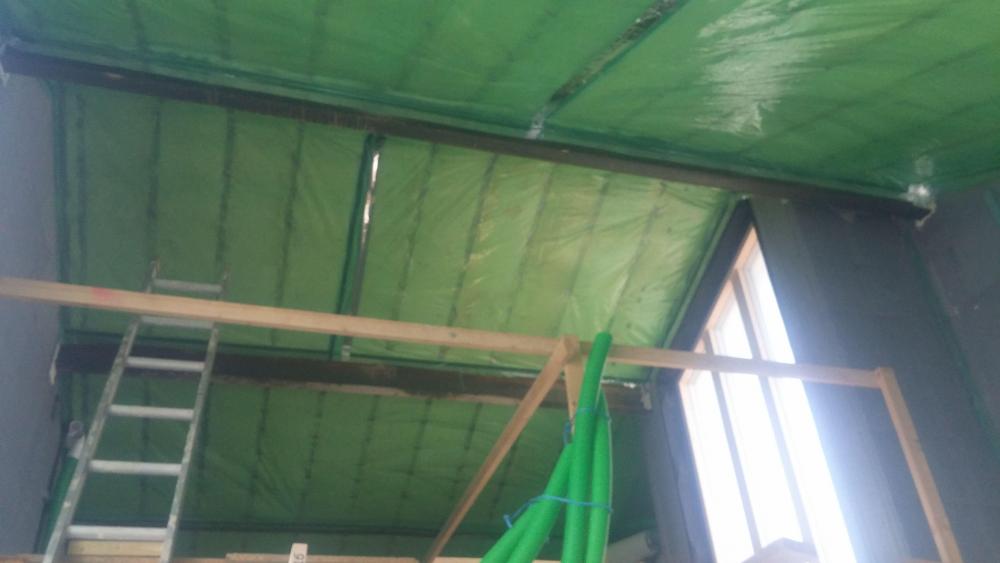 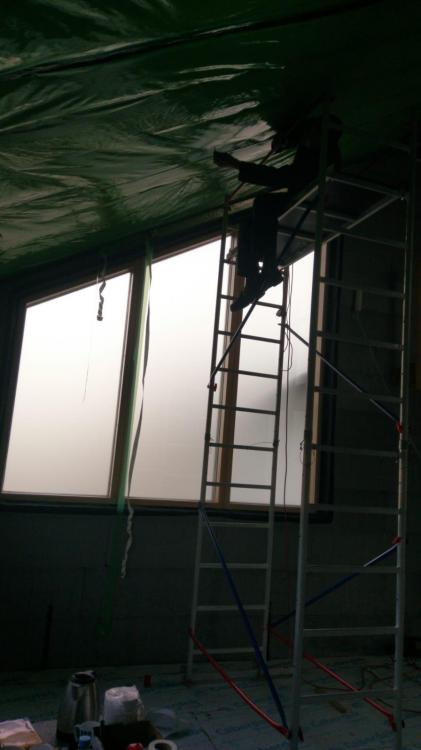 With the fan drawing air into the house detecting leaks was straight forward as the air was much cooler outside than in. We had a few leaks virtually all at the junctions of the VCL with the roof purlins. The guy doing the test recommended trowelling mastic over the spray foam which had been used to seal the junction of the purlins and the ICF. Having identified the areas we needed to fix we got on with the air test proper. As the test proceeded restrictor rings were fitted to the fan until the required air pressure was stable. The initial figures are excellent down at 1.08 ARCH which given we have a bare structure and know leaks around the purlins mean we should be able to meet the 0.6 ARCH. Interesting form me was the degree to which the fan got restricted, you can see from the photo that just a 15mm ring was left exposed. For a normal build this would be the case for a small single bedroom flat. 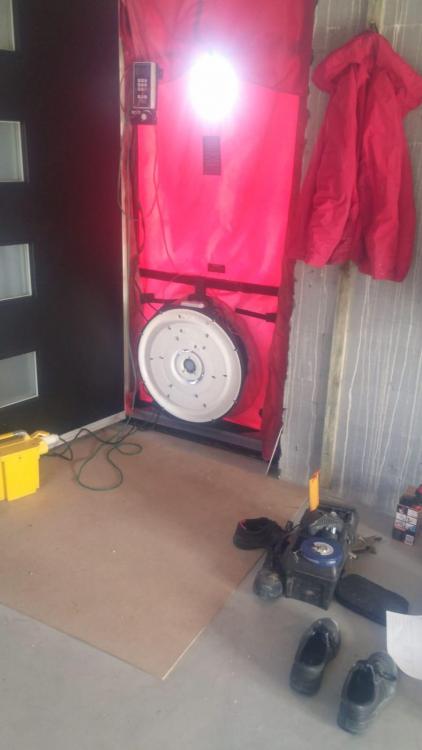 With the MVHR tubes in place we set to installing the water pipes. It’s surprising just how much having to make decisions about tap positions can exercise your patience. We had opted to use a water softener and after a bit of searching around decided to use a Monarch Solo, a non electric water softener that gives ample flow rates for our house size. Compared to re-plumbing a house starting out from scratch made it a simple and quick. Again having two people to feed the pipes makes the job a lot simpler and saves shaving the pipes through the ceiling webbing. We will pressure test all the water circuits prior to do any plasterboarding.

Along side the water pipe installation we also installed the electrical ring mains. With ICF it’s important that the wires don’t come into contact with the polystyrene as it leaches the plasticiser from the cable insulation making it brittle over time. Lighting rings will follow. We have a fairly good idea of where we want lights but it’s difficult to be sure so we plan to put in a lot of redundancy so we can change lighting as required once living in the space.

We have also installed stud walls for the two bedrooms and bathrooms. The seemingly huge space soon shrinks! Having said that the rooms are generous. In the entrance hall one wall has a curved corner, a little more fiddly to construct but well worth the effort making the hall/stair area look really good. 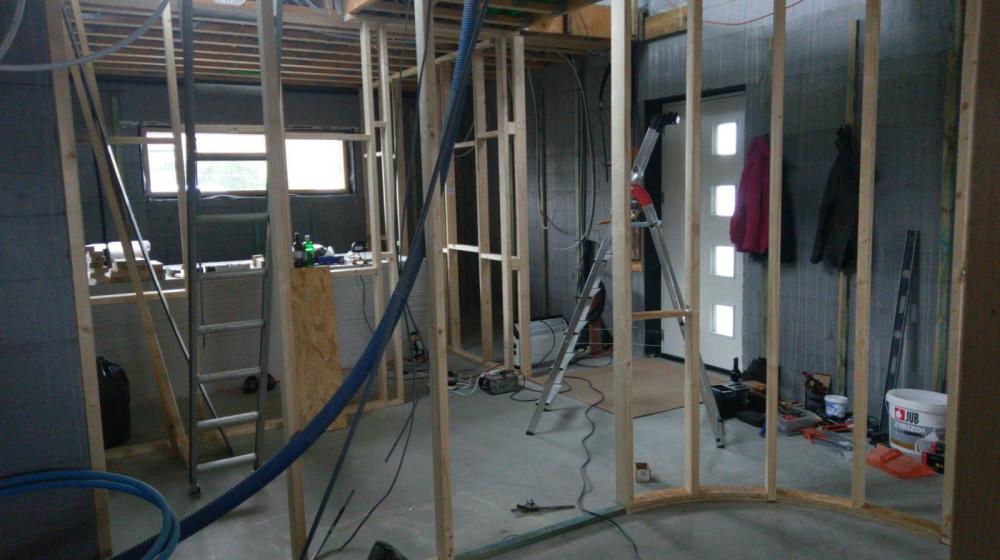