And so it begins ... the refurbishment of my downstairs bathroom to be a shower room.

The self-builder who added an upstairs and extension to the bungalow got a few things wrong, and one of them was that he put a bathroom downstairs, and a shower room upstairs; exactly the wrounf way round for when a frail relative or disabled visitor needs to have downstairs facilities.

So this summer both bathrooms are being overhauled - starting with the downstairs one this week.

I was expecting a few things to emerge from the shadows, given that there have been a couple of idiosyncracies in the way elements of the house have been done.

The downstairs bathroom has been gutted this morning, with FOUR surprises.

Firstly, and I am probably unwise to admit not finding this in up to the last 5 years or so, it turns out that the plughole was not connected to the waste pipe .. or rather, became disconnected from the waste pipe at some point between 2009 and now. I moved in in 2012, and have never had reason to burrow under the bath. And I don't mean the overflow, I mean the plughole - where all the water exits.

You could have blown me down with a bicycle pump on that one.

It seems that originally it was not pushed on by the self-builder who did the house (treat self-builders like Mr Brezhnev - trust but verify !), in that the little flange around the male half had been treated as a "push pipe up against here" thing, rather than a "push pipe over this flange to make sure it grips properly and stays on" thing. Interesting. So the waste pipe was in mid-air below the plughole and a portion of the bathwater had been missing the entry to the pipe. The effect was a moist slab, but apparently no humongous harm has been done, other than a need to run my medium sized dehumidifier overnight.

Damp patch in screed caused by plug-disconnection. And secondly, a huge crack in the sand-cement screed - caused we think by expansion-contraction as the ufh cycles. Fibres, Fibres, Fibres ! 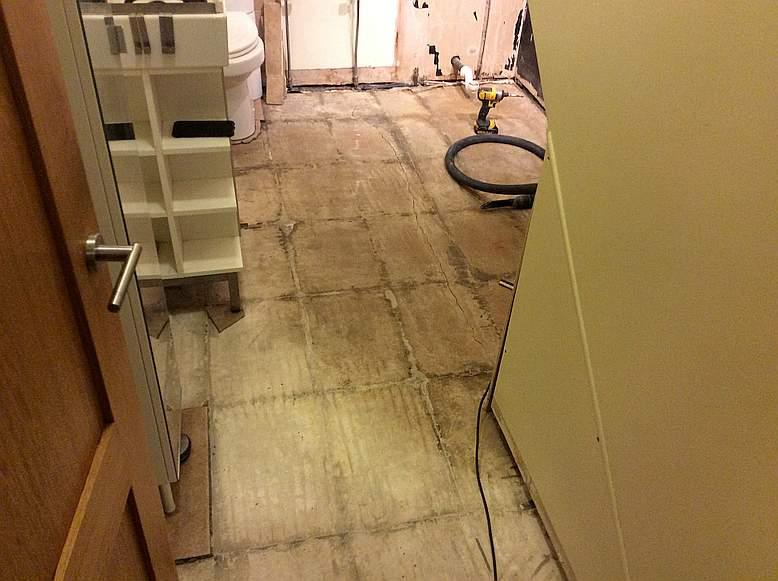 Davina the Dehumidifier doing her thing. 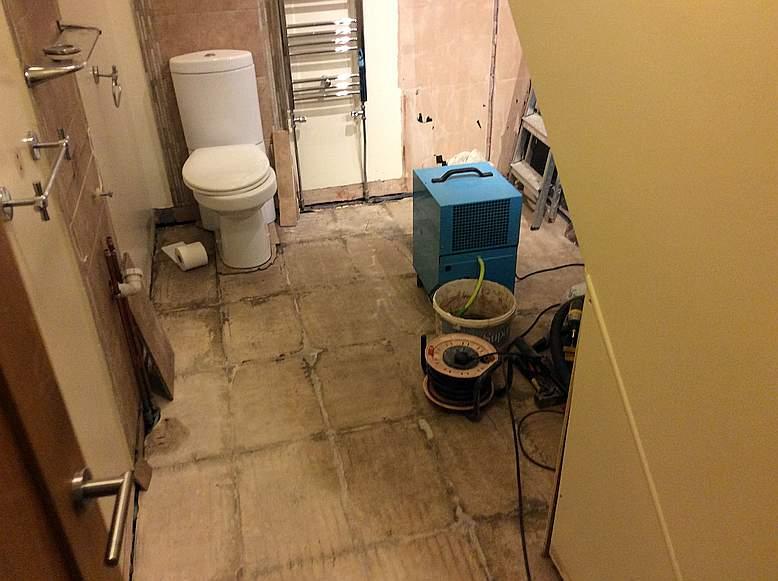 Thirdly, for some reason the chap had painted the wall behind the bath with some kind of water-impervious gloop, which guarantees that the tiles were not very well attached as the strength is that of the weakest layer. 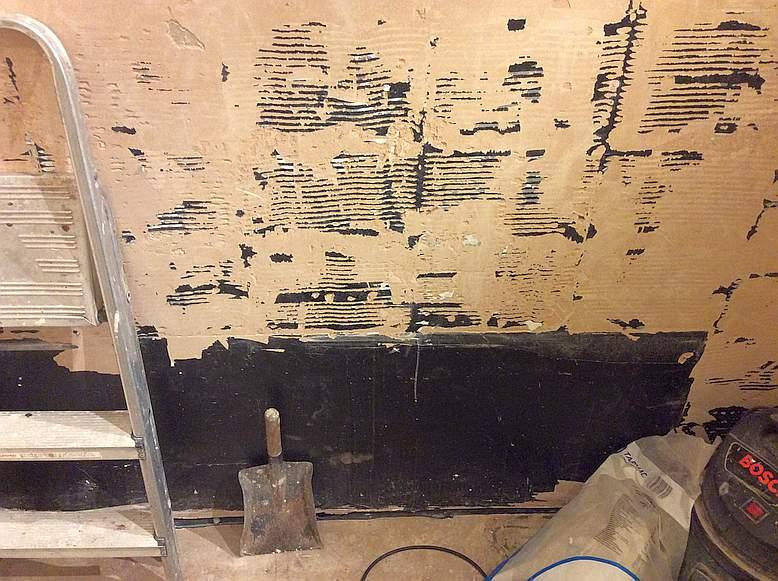 And fourthly, there was an interesting recessed trench round the end of the screed, perhaps for pipe-tidy and "flat floor" reasons. 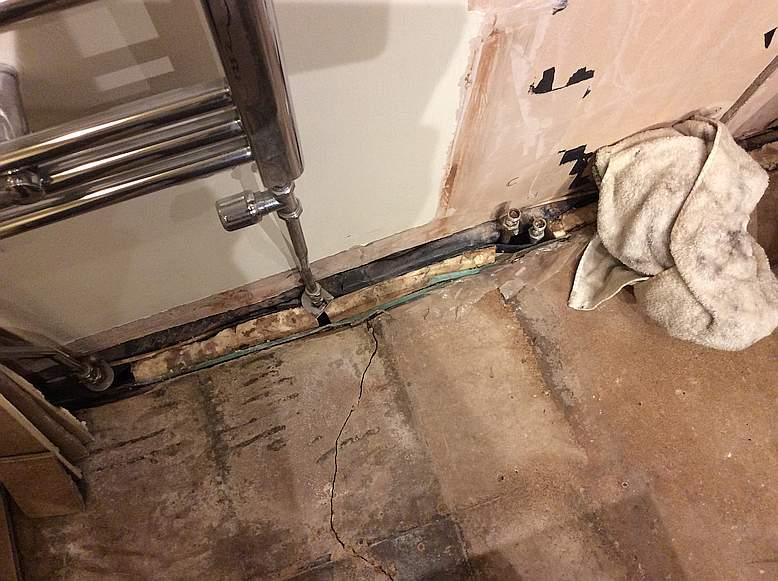 And that photo shows a better view of that crack.

I am now hoping that the already identified crack in the floor of the upstairs bathroom is in the screed not the subfloor, as that will perhaps save me hoicking out quite so many of the underlying layers. 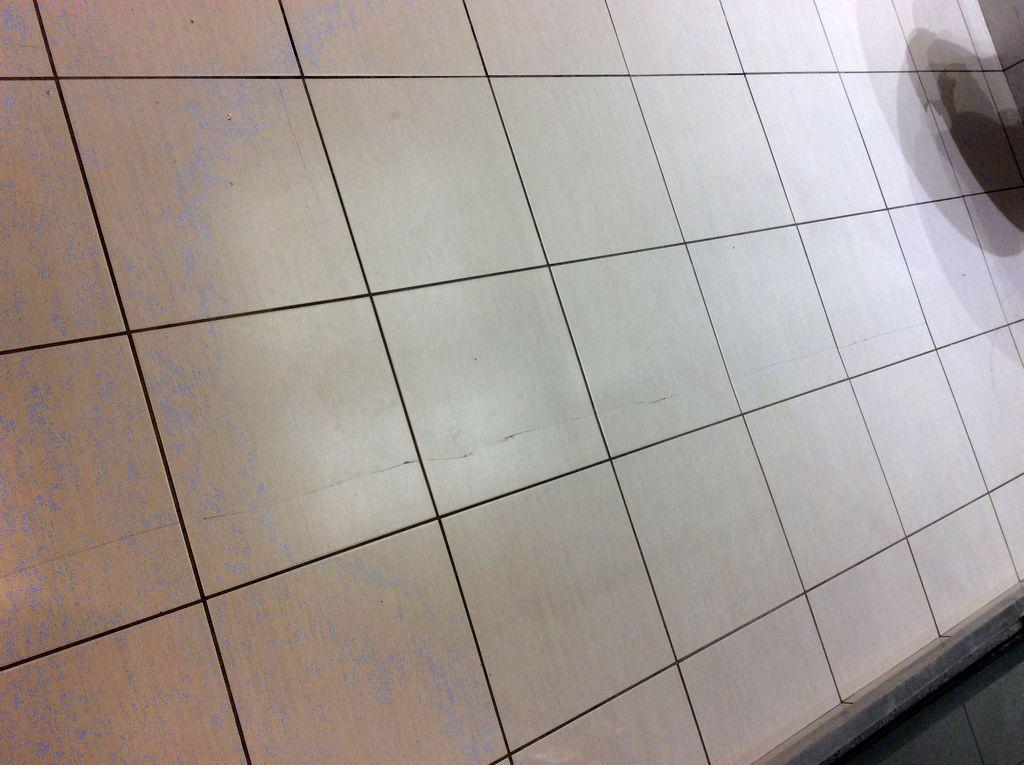 Come back tomorrow for the next enthralling episode of ... the Saga of Badezimmer Zwei.

And - if you have not done so recently - check that your drainage pipe is properly attached.