For a reason or reasons unknown to me I am about to pen a short piece about cats.

I think it is mainly because @AnonymousBosch posted a picture of his supervisory cat, here.

Now, that cat is a lot of things, and whilst allegedly Jellicle (ie black and white), is not so. It is clearly a Rum-Tum-Tugger - particularly given a penchant for using 'playbites' as a slightly abrupt management tool.

It is also the fault of whoever did not tell me about the statue of Hodge, the supervisory cat that used to own Dr Samuel Johnson, when I was living in the City of London back in the late 1990s. As reported by Boswell:

'I recollect [Hodge] one day scrambling up Dr. Johnson's breast, apparently with much satisfaction, while my friend smiling and half-whistling, rubbed down his back, and pulled him by the tail; and when I observed he was a fine cat, saying, "Why yes, Sir, but I have had cats whom I liked better than this;" and then as if perceiving Hodge to be out of countenance, adding, "but he is a very fine cat, a very fine cat indeed."'

I need to record somewhere that a statue of Hodge now exists in Gough Square, outside Dr Johnson's House - just around the corner from where Cafe Opera used to exist in Fleet Street. Cafe Opera was just what it says - reasonable Italian Food whilst being serenaded by Opera singers earning a crust on the side. 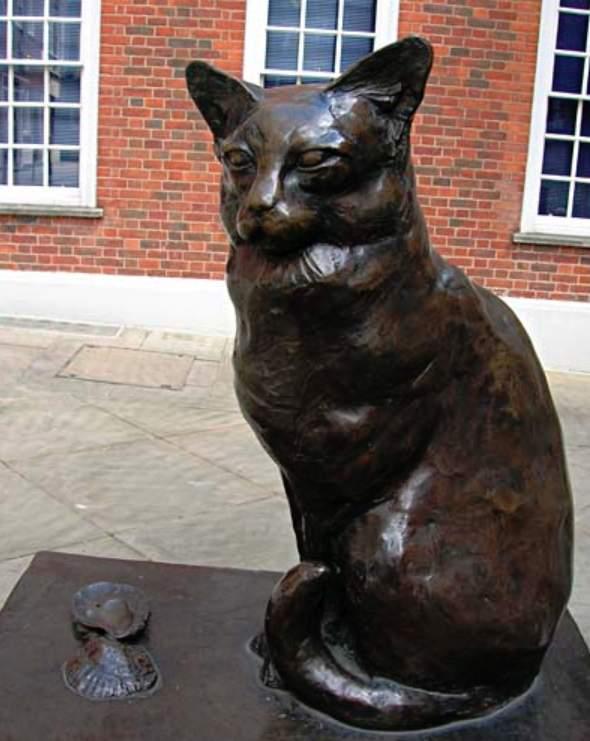 (Credit Mrs Woffington, who's current blog, which seems unfortunately to have stopped in 2010, is here. I will assume she found a congenial Latin teacher who now occupies her interest).

The oysters, upon which Dr Johnson used to feed Hodge, are a sign (in 2019 anyway) of a very supervisory cat.

Whilst I'm jabbering about this area, I recommend that anyone wanting to get some amazing ideas for Garden Design take a tour around the two dozen pocket-parks in the City of London. These are genuinely delightful, complexly small designs, and deserve a profile as high as the collection of City Churches by Wren.