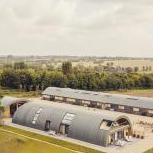 Training recommendations to become a builder.

By Claire B, July 9 in General Self Build & DIY Discussion