The next stage of the setup of the site took place over the last 3 weeks. with some good progress.

The trip up North, 433mile from our current rental in the NW of England. I set off on Wednesday morning in the 7.5T truck, and the 2 dogs for company.  I took some materials with me, and had a gut feeling I was overloaded. I had worked out the approx. weight of what  I was taking, but was unsure of the TARE weight of the truck. so I didn't take all I was planning.  Luckily the nice guys from VOSA, At Carlisle (Todhills check site), confirmed my  suspicions when the invited me in for a check.   I was over weight, but the truck and my paperwork were all in good order, and they give the truck a thorough looking at.

The upshot of this was me renting another 7.5T truck for storage, offloading the excess weight, driving the remaining 333 miles, unloading, returning the next day with the empty truck, re loading and driving back to site. 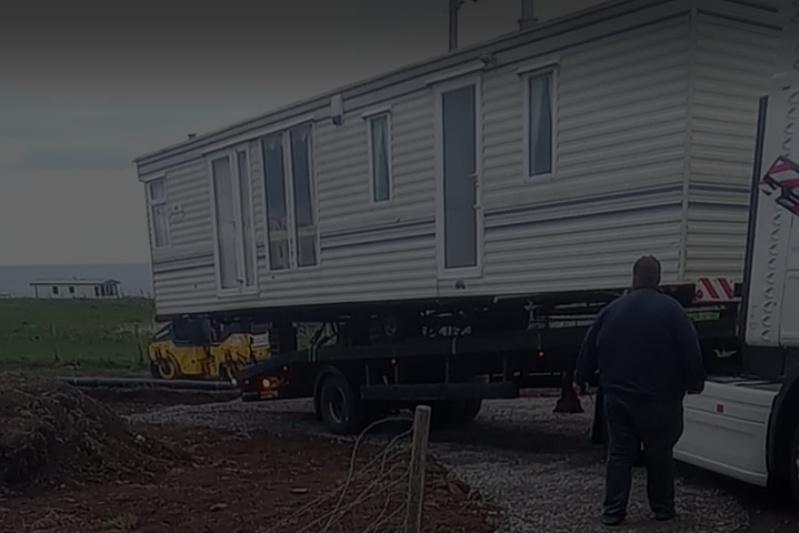 I hired a contractor to carry out the highway works for the site entrance, basically as he had the correct insurance and RAMS it was easier to get this stage subbed out.

The idea was he would open up the site, with a 5 T digger, start the initial road and stone this up with around 60T of type 1. I would then meet on site and hire his man for a few days to assist with the pecking of the treatment plant.

This didn't go to plan, they had to use a 13T machine, as it was available, so when I eventually get to site on the Thursday, due to the size of machine, the operator has completed the initial works, then pulled out approx. 60M of the road, and pecked the treatment plant hole, and I got this for free... 😁

Having a 13t machine on site, with operator for the Friday, I needed to make the most of it, as I was only paying for the rental of a 5T machine.

Mikey the operator, made short work of pulling out the remainder of the road up to the location of the house, in total this road is around 90M.

Next I had him strip the area for the house.  The house is around 13M x 7M, so I wanted to strip back a working area around the house, my thought was we would hit the bed rock so this was the plan,  we marked out a 16M x 11M rectangle, and he set to it, it took him about 2 hours to strip the land and scrape it clean. 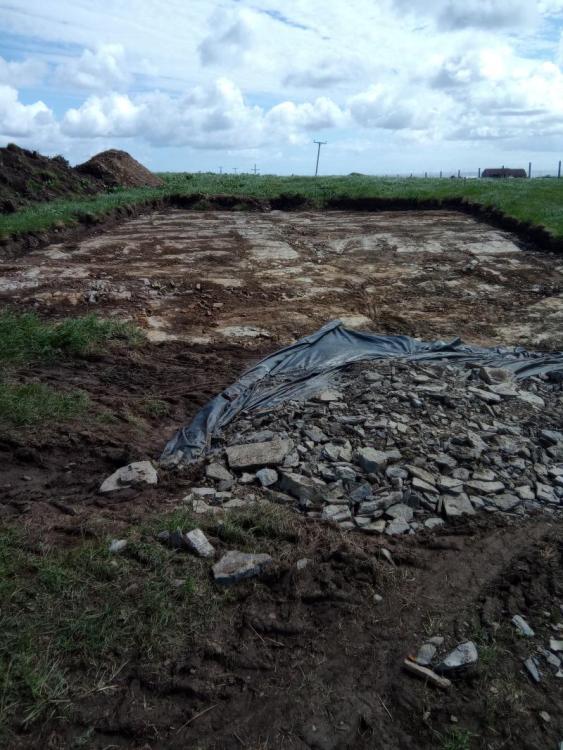 The above is the bedrock where the house will be, and the road coming up the side of the house. (I used a geotextile as a separation layer for the road, although in sections the road is on bedrock anyway,)

You can make out that there is a fall from the top left falling to bottom right, this will be made up with type 1 stone, raising SW corner of the house around 700mm, I will raise the road in this section and use some of the top soil to level this out a bit and soften the impact.

The last Job for Mikey was to dig me the trench for the services, he dug a 600mm wide trench about 8M short of the Treatment plant (to allow me access to move the spoil, and a similar distance short at the other end for me to connect to the water. just shy of 60M. 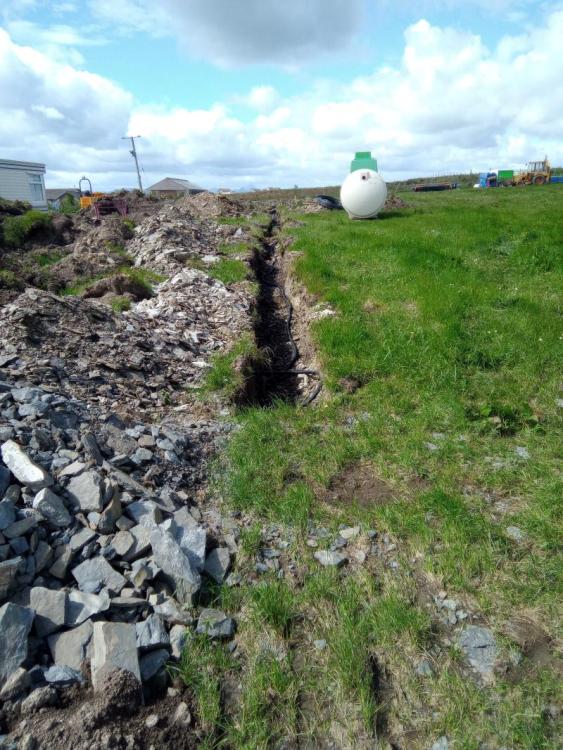 Friday was a busy day on 3 hrs sleep.  The treatment plant also arrived as can be seen above, I went for a Tricel unit, this was based on cost, treatment, dimensions and availability.

Last job for the day was to move the caravan,  Mikey helped me with this and we stripped a bit more land and located here temporarily for the night  North / South.

Saturday I decided to get the water connected to the caravan, for this I needed to complete the  trench from the standpipe to the large service trench. I  never dug this on the first trip as I was concerned about the electrical supply to my neighbours property.

Cables seemed to run across my field at around 300/ 400 mm depth.  I used my contact at SSE and he arrange to get the cable moved  / deepened.

This was carried out a few weeks prior and we discussed the position of the new road, and he made a site visit and we talked about me extending the water pipe trench in both directions so that I could also lay a utilities duct to the road for broadband.

So to say I was a bit surprised, and p***ed off when I cut through the neighbours supply cable. The cable was as I was worried about 400mm deep, and the marker tape was next to the cable....   How to upset your new neighbours by having their electricity supply stopped two times (1 for the initial connection, 1 for the remedial works), only for me to cut the cable for a third time.... 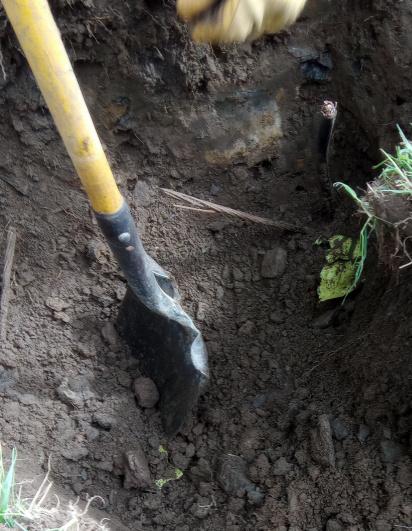 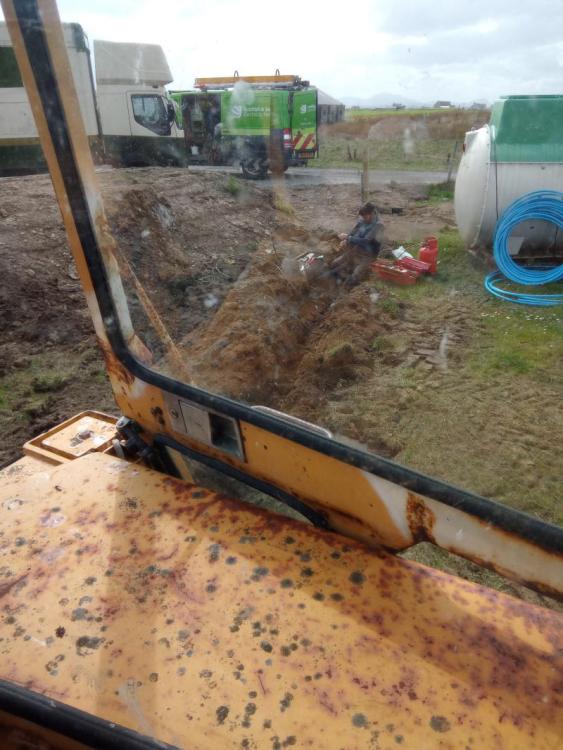 At least they were very prompt, they arrived after about 40mins, and it took him around an hour to re-joint the cable.

I then removed the water standpipe and ran my new water main up to the caravan. It will tee off for the pods at some point, and then continue up to the house. SO now I had running water in the van, and gas for the water heater and hob / oven.

Sunday was glorious, so I caught up on my sleep, and had a restful day.

Scottish Power were due to fit the meter on the Wednesday, so I needed to get my service cables from the meter box into the service trench and up to the caravan and to the pods.

I dug a trench across the road and through to the service trench.  I used a 125mm Duct, and inside here I ran some 6mm SWA to supply the pods and some 50mm Duct to run a service cable to the caravan and ultimately up to the house.

I pulled the cables through, and I have put a caravan hook up point next to the static. 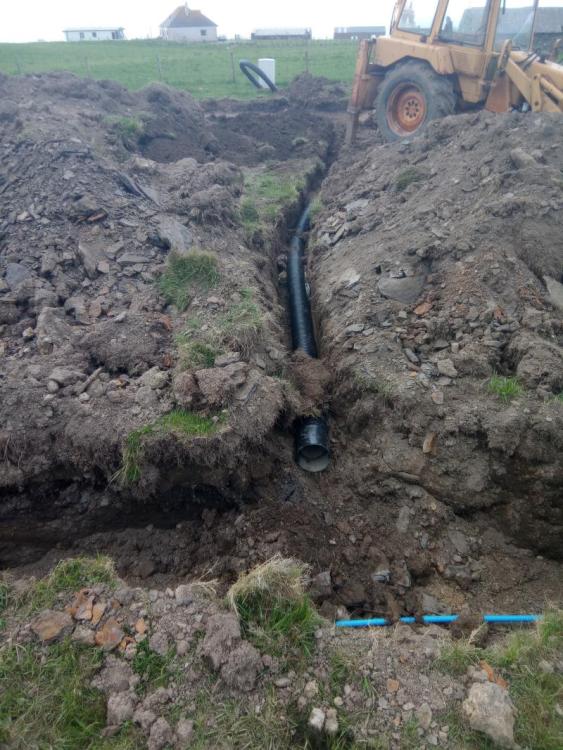 Tuesday / Wednesday, I had 80T of Type 1 MOT delivered in stages, I spread this out using the Back hoe, and vibrating roller.   so by the end of Wednesday I have the base in for the road. which will give me good access for deliveries.

Scottish power were a no show.....

Discussing the caravan with the neighbour they advised turning the caravan 90deg, so it was end on East / West as the stronger winter winds tend to blow from the West, and being side on would ultimately be unstable.

I dug out another section of land next to the caravan with the idea of swinging the van around at weekend when Mandy Joined me for the last week.

It took me and Mandy all Saturday to move the van, using the backhoe to pull it around.  and most of Sunday to get it jacked up off the ground and levelled.  We dug 4 pits later on in the week and concreted some anchors in to chain the van down. 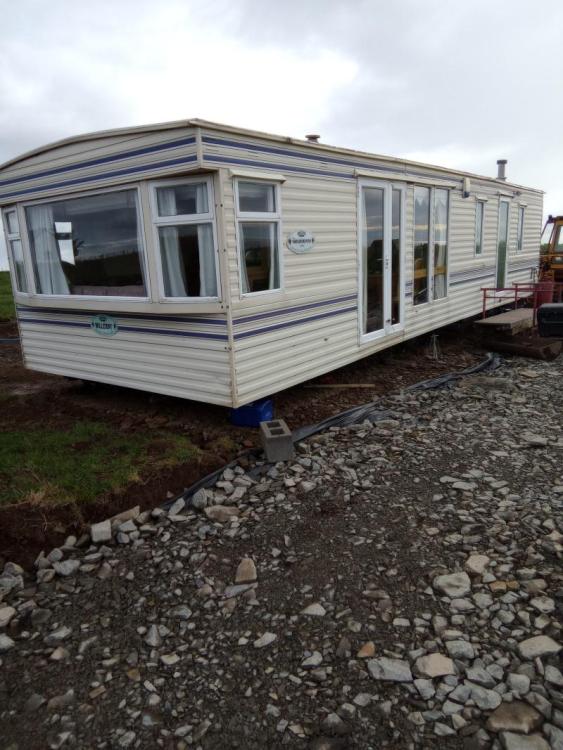 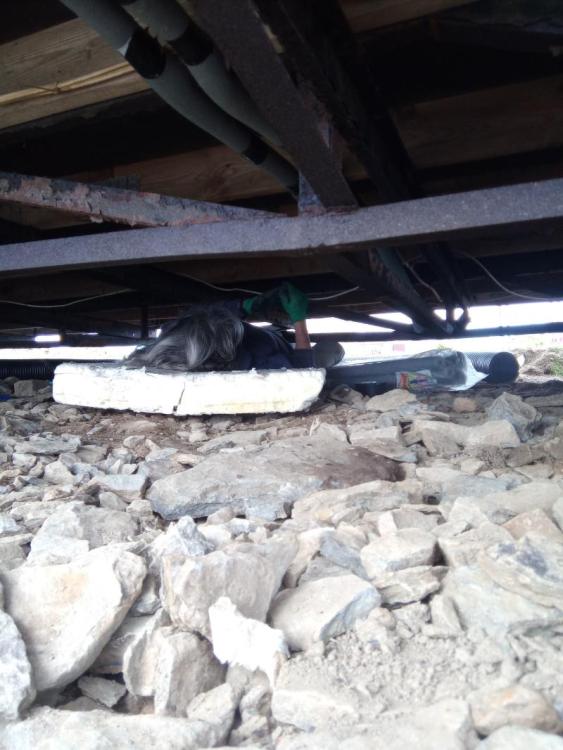 The van in position with Mandy getting the best job of the week to squeeze under the van and start to insulate the water pipes...

Scottish Power let us down again with a missed appointment on the Tuesday with a promise of Friday....  They actually turned up late Thursday and fitted the meter, so we had power on the Thursday night.

We spent a couple of days moving spoil around the site to create a mound of earth to shelter and soften the impact of the pods, this was also a planning requirement for the neighbours amenity.

Still work in progress and there's 10's of tonnes more to move. 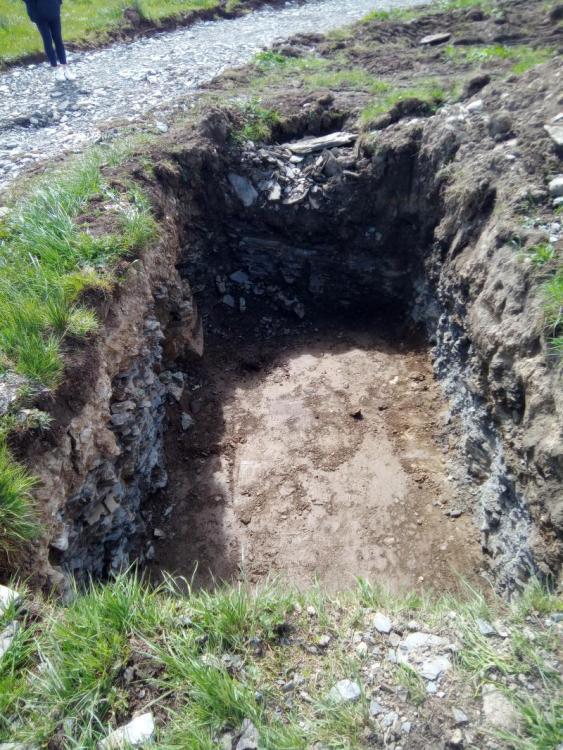 Last job before packing up on the Friday was to level the base of the treatment tank pit.  At this point we were still waiting for the building warrant. so couldn't actually install the plant.

We end the week by getting the Building warrant approved, and the certificate for discharge for the treatment plant  both on Friday.