Being within a conservation area I needed to give notice to the planning department that I intended to remove the 2 trees that would allow me to make full use of the space at the bottom of the garden for my building. One of the trees was a lovely Ash tree but unfortunatley (for the tree and the enviroment) it was signicantly diseased with an almost hollow trunk at ground level, extending down to the routes that would at some time fall down (see picture of tree surgeon hiding inside the tree, once it was cut). This was fortunate for my build as the tree having a limited life span was likely to get permission to be removed. The second tree was a large bay leaf tree.

I was waiting on 'tenderhooks' for 6 weeks before getting the go ahead to remove the trees. I was now under pressure to get the trees down and start excavating - at this stage I was optimistic that I would be able to get the foundations and walls up before winter set in!

I hired a tree surgeon to take down the Ash tree but to save costs I took responsibility for dealing with disposal - a big bonfire of all the smaller branches and greenery - I have kept the bulk of the timber for future use in a wood stove - still have to work out how to get it dry!

I decided with the help of friends to DIY this tree. We managed to take it down without any incidents but unlike the Ash tree it sat on the building plot and the stumps and roots needed to be removed. The tree surgeon offered to grind it out for £1000 and effectively said we would never get out with our digger, picks and shuffles. We decided to prove him wrong and a couple of days later we had it out ( see video). It took many more hours, periodically chipping away at it over subsequent weeks before we got it to a size we could get it out of the back garden, transported on the digger.

Digging the hole was a long job we hired a 1.5 ton digger which we got down the side of the house by agreeing with the neighbour to take down some fencing, the payback being I'd put up new fencing which they were happy about. We initially wheel barrowed the earth out to the front to be taken away on grab lorries but it was really hot and tiring. After 5 muck away trucks (estimated 80 tonnes) we hired a mini digger which worked a treat, in all I think we had 14 muck away trucks with a peak of 3 in one day! 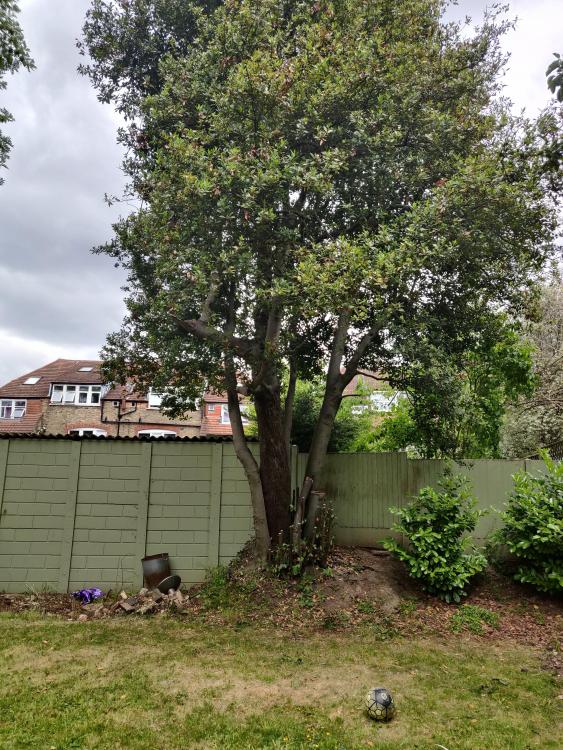