After years of less extreme renovation, i've decided to get back on the waggon and build the third extension on the bungalow where I live. The last few years have been really tough, some of you will know that my wife has been seriously ill, and that eventually led to her death last June, for a good while doing anything more to the house just seemed pointless, but I see it as a way to focus my energy on something positive.

After many years of having in mind to install EWI on the gable end of the bungalow, i decided to think of other things I could do, to perhaps give more than just a warm wall. I calculated roughly how much the EWI was projected to cost (around £2500), and then calculated how much a small extension would cost (around £7000), and it instantly made sense to me that I should go down this route, whilst I will still need small areas of EWI, they will be very small compared to what might otherwise have been.

I've done a rough 'fag packet' drawing at the moment, just to have a think about different things: 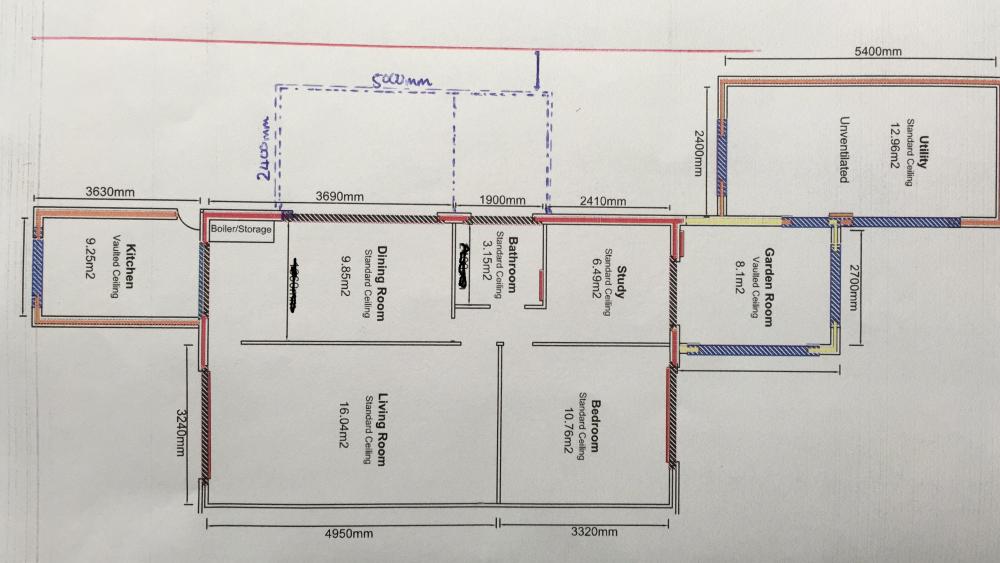 So the intention is to make a larger dining room, and bathroom, and creating a courtyard infront of the utility for things like bins, water storage, and the inevitable ASHP equipment, which will keep it all out of sight. Making use of the already ample openings, will save any major structural work, however the roof timbers on the extension (which is going to be a mono-pitch lean-to style roof) will likely have to sit on a steel lintel, as the bathroom window opening has no lintel on the outside brick layer, the dining room opening has an angle iron, but who knows if its strong enough to hold a load of concrete tiles and a triple glazed roof window, I will be putting all this through a structural engineer to get a final decision on this. Having the side extension also fulfils another thing which is to prevent overheating. That side of the house faces south, but in winter doesn't get hardly any sun as its shielded by the house next door, so having the side extension with only roof windows facing south (which can be covered with awnings), should prevent a lot of overheating which was become very common on the hotter days.

Construction is going to be block and brick cavity, but going with Xtratherm CT/PIR full fill PIR insulation in order to achieve sub 0.16U on the walls, and this is a true self build, as per my other extensions, even the foundations i'll be digging by hand, as where its situated is where all of the foul water drains are, which all need unpicking and re-routing, about time I had some exercise! lol. Going with a large roof window in dining room, and a small one in bathroom, with large window in dining facing to the left hand side (which is the road side), and no further windows in the bathroom, unless planning say i've got to, roof window should give enough light in there.

As I've already used my 1 free pass for permitted development, this one requires planning permission, so my next task is to draw up some plans, and submit them at some point this year, QCAD being my tool of choice. I used to use draftsight, which I was hoping to do again, and just build on what I had, but turns out they've revoked the free version, and the files it generates don't open in anything else annoyingly, so its a start from scratch job!

Would love to hear any opinions on if you would do anything differently, always like considering different ideas. Will post the plans for both planning and building control when completed, to show an idea of what is required to get approval (which may take several goes, its been a few years since i've done any plans!)