No, I haven't managed to sneakily bury the wayleave officer somewhere on site!  This post is for the other electricity cable on my site, namely the one that directly supplied the previous building and will supply the new one.  This comes onto the site via an overhead cable and a post and stay that are very close to the new building.  Entirely safe but very ugly and certainly won't fit in with the lovely garden that we're planning. So, from the outset, we've planned to bury this supply as much as possible and today was the day.

Burying the supply has involved putting in a new post right on the boundary with my neighbour's garden, through which the cable runs from the nearby transformer.  The existing cable was then attached to this one and the supply cable runs down it, through a trench and eventually reaches the garage.

The trench was dug last week and blinding sand laid along its length.  Simple enough, but it's a really long trench, something in the order of 50 metres all told, and we got through the best part of 4 tonnes of sand to line the base of the trench.  In digging out the trench, an old land drain got smashed up as it ran directly parallel to the long run of the trench, and at right angles to where the trench turns in to the garage.  I'm really glad that it was dug last week and not this as it was lovely and dry last week.  This week, I'm well on my way to having a moat as a result of the broken land drain.

This is looking back towards my neighbours' cottages and where the new pole will go in, against the fence.  The pole to the right of the cottage on the right is where the supply runs in from. 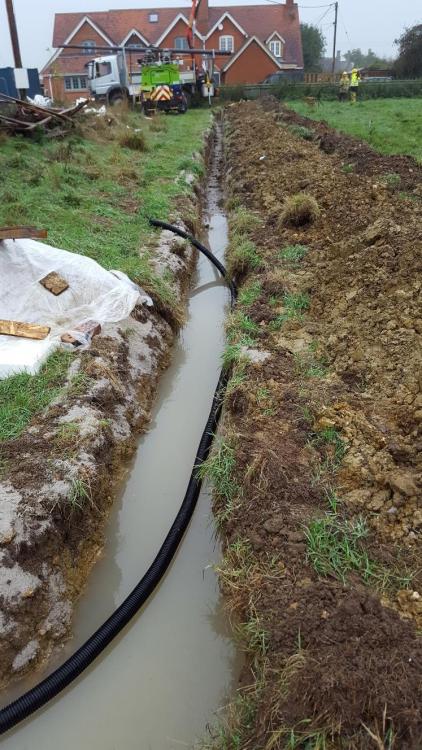 And this is around the corner, looking towards my garage.  At the end of the trench, there is a duct that MBC put in (there are a few others, too) that allows the cable to come into the garage from under the slab.  There will be a whole bunch of kit going into the garage, including my sunamps, so this seemed like a good place to run the supply in. 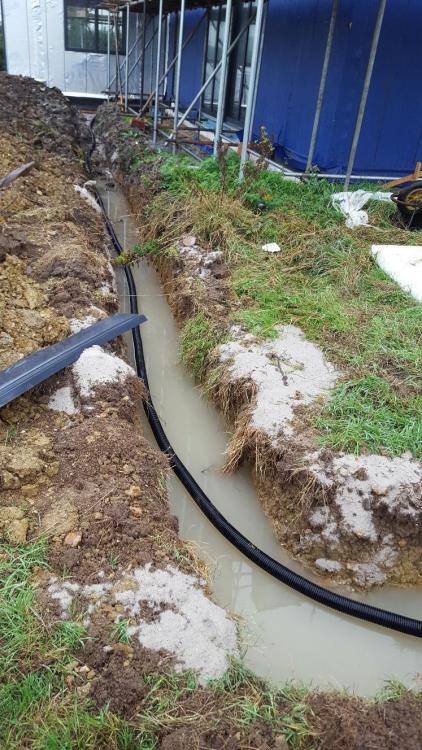 Because it's such a distance between the new pole and the garage, the first 30m of the supply cable had to be a very heavy duty one.  About 3/4 of the way along the long trench, there's a fancy looking connector that links the heavy duty cable with a normal one, which continues on into the garage.

As well as running the new cable into the garage, whilst my back was turned, the meter fairy arrived and my electricity meter that was previously located on the old pole near the building magically re-appeared on the wall in the garage.  Useful things, these meter fairies.  When I rang my electricity supplier a couple of weeks back and asked when they might be able to move the meter, the earliest date they had available was mid December, which would have been disastrous.  Thankfully, the forces of good prevailed and the meter is now where it needs to be.

My site seems to have a natural affinity for augurs and drills.  Back at the start of the build, a rig was on site taking soil samples.  This was followed in due course by another rig drilling holes for all the piles and now we've had another one, this time to drill a hole to put the new pole and stay into.  As usual, the augur came up caked in clay but the soil was still dry at depth and it came away nicely.  Here's the augur going in for the pole. 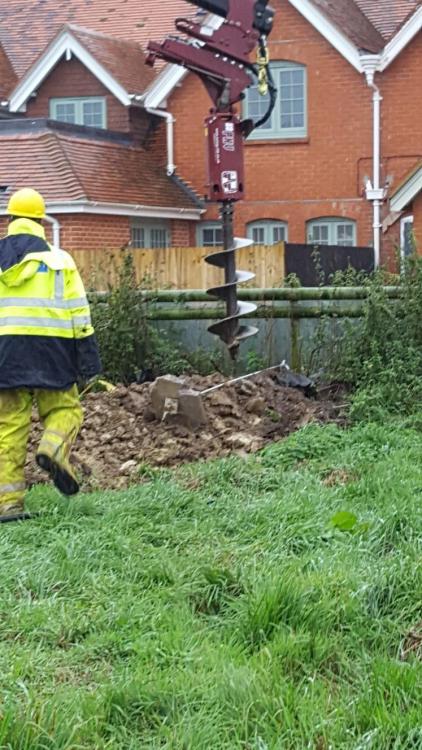 And here's what it drags up.  I really should consider a pottery business. 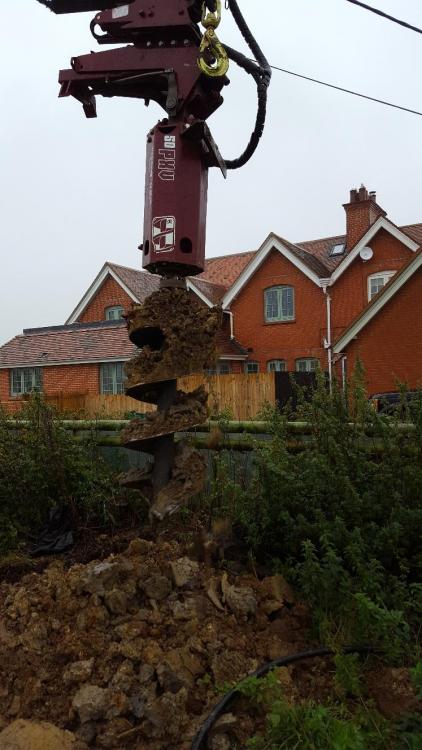 Just a final pic of the pole on the van: 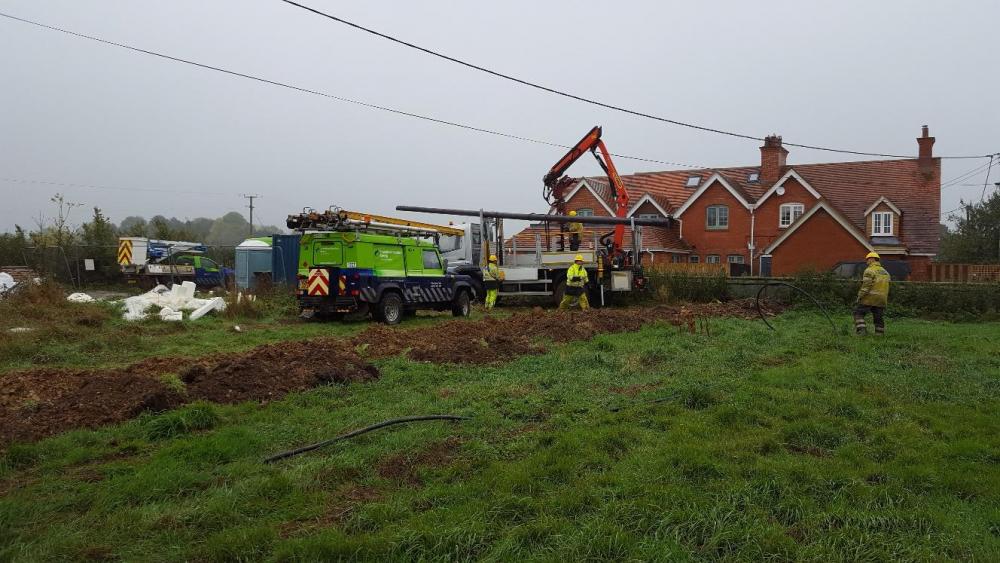 The guys from SSEPD made the job look very easy, but a reasonable amount went on and there was a fair bit of equipment on site including the cherry picker, drilling rig and the ubiquitous land rover, with 4 guys in total.  They finished just before 1pm and worked efficiently and were a very nice bunch of guys.  A couple of them will be back in due course to do whatever is deemed necessary to the poles carrying the oversailing wires, but that may be a little while off yet.

I have an electrician coming onto site tomorrow to put some connections into the house.  I wasn't planning to get this done until at least another week's time but it needs to be done this week as MBC and Norrsken (windows) are back on site next week for remedial work and they will need to get plugged in for all that.

Once the snagging work is done, the next big push is to get the various roofing jobs finished off so that the building will finally be watertight; my parapet walls may look lovely, but they are leaking like mad right now, so I shall be relieved to get finished there and let everything start to dry out.  I'll also get the trench back-filled as I don't really want a moat and certainly not that close to the building.  It does serve to illustrate very well why a soakaway wouldn't work, though.